Regional Stability and Security Issues in Africa: The Foreign Minister of Burkina Faso to Speak on Mediation, Prevention and Conflict Management

In his only major address during his upcoming Washington visit, H.E. Djibrill Bassolé, Foreign Minister of the Burkinabe Government will speak on how conflict has undermined African States.

Regional Stability and Security Issues in Africa: The Foreign Minister of Burkina Faso on Mediation, Prevention and Conflict Management

William M. Bellamy, Former US Ambassador to the Republic of Kenya and Director of the Africa Center for Strategic Studies

Burkina Faso has long served as a mediator and as a stabilizing influence in West Africa.  William M. Bellamy, Former U.S. Ambassador to the Republic of Kenya and currently director of the Africa Center for Strategic Studies, observed that “it is perhaps a compliment, Mr. Minister, to suggest that Burkina Faso has not captured as much attention, as much worried attention, as have your neighbors.”  In discussing the relevance of mediation, prevention and conflict management to the work of the Africa Program director, Steve McDonald, stated “These are issues in which my programs at the Wilson Center are very involved, having conducted, over the last decade or more, post-conflict peace and collaborative capacity-building trainings with high-level leadership in post-conflict countries like Burundi, Liberia, and Democratic Republic of Congo.  It is imperative that governments, the United States included, understand how these conflicts have undermined African states, and explore their structural and cyclical causes, and be aware of the various conflict prevention and resolution tools at their disposal.”

An Island of Calm 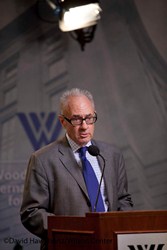 and into the potential role for Burkina Faso in mitigating these situations.  He said that while West Africa is “entering into what may well be a new period of turbulence and uncertainty,” its causes are not the “economic stagnation and growing poverty or hardship, as was the case when West Africa was last a major focus of international attention fifteen years ago… it’s not macroeconomic decline, it’s not a generalized deterioration of socioeconomic conditions – it’s something else.  And Foreign Minister Bassolé is perhaps uniquely positioned to tell us what that something else is, and how it might best be addressed, not only in West Africa but across Africa.”

A Landlocked Nation Contributing to Regional Peace and Security

H.E. Djibrill Bassolé addressed Burkina Faso’s role in maintaining peace and stability in West Africa saying that it is in his landlocked country’s best interest to “promote good neighborly relations, peace, and stability through dialogue.” 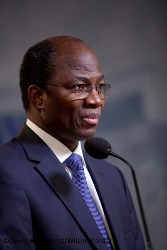 Speaking with regard to West Africa in general, the Minister said that conflicts in the region tend to be based on discontent  in matters of access to power, and issues of governance and democracy; he posited that many of the current conflicts in West Africa are caused by leaders’ reluctance to cede power, and their willingness to use any means, including the manipulation of ethnic and regional identities, to maintain their stay in office, leaving behind a feeling of alienation and exclusion from the political process.  In terms of regional trends, he cited the effect of Libya, when trained fighters who had supported Gaddhafi returned to their home countries, pointing out that “lots of young people would rather sell their skills to rebellions than devote their energy to productive work, because some of these youths have been part of armed circles since childhood and they know nothing else.”  It is against this backdrop that Burkina Faso has sought to encourage dialogue in conflicted countries like Guinea, Togo, Côte d’Ivoire, and Darfur.

Uncertainty in Mali as a Threat to the Region

The Minister then took a few moments to address the rapidly deteriorating situation in Mali, where he said that coup leaders had demonstrated a lack of consideration for democratic institutions, given that presidential elections would have taken place shortly.  Minister Bassolé added that the Tuareg rebels’ cooperation with Al-Qaeda in the Islamic Maghreb (AQIM) constitutes a destabilizing force for the entire sub-region, spreading Islamic fundamentalism.   The topic came up again during audience questions, and the Minister said that rather than strengthening the army, a coup weakens it, impacting their credibility, creating divisions within the army, and, most importantly, negatively affecting their ability to deal with the Tuareg rebellion in the north, which had been their primary motivation for undertaking a coup d’état.

The Minister concluded his remarks by speaking of Burkina Faso’s role in Mali, charging that, “We are doing our utmost to try to stabilize the situation in Mali, because chaos in Mali means chaos everywhere in the Sahel and the Sahara, and that opens a Pandora’s Box of insecurity and instability in the region as a whole…  If Mali is left to itself, rudderless, devoid of leadership, that will be very dangerous for the countries in the region.  The utmost priority… is to help Mali achieve stability.  We need to ensure that Mali can move towards democratic elections; that it returns to institutional stability.  We need to convince these young members of the military to put an end to their rebellion and, clearly, what we need to resolve this major crisis is international solidarity.  And I’m counting on all necessary channels in order to ensure that we can provide the necessary assistance to the Sahel and Sahara region.”

Foreign Minister of the Burkinabe Government