Reporting on Global Health: A Conversation With the International Reporting Project Fellows

Fresh off their assignments, four fellows from the International Reporting Project speak about their experiences researching underreported health issues in Haiti, Botswana, Mozambique, and Uganda.

"The story is the story, the information is the information, but you can frame it in very different ways," said freelance journalist Annie Murphy at a roundtable discussion on the current state of global health reporting. Fresh off their five-week assignments, Murphy and three other fellows from the International Reporting Project (IRP) – Jenny Asarnow, Jill Braden Balderas, and Ann S. Kim – spoke about their experiences researching underreported health issues in Haiti, Botswana, Mozambique, and Uganda.

Global health reporting, like many other forms of journalism, has felt the pinch from the global financial crisis, said Balderas, who edited a recent Kaiser Foundation report on the issue, "Taking the Temperature: The Future of Global Health Journalism." Other challenges that have led to less global health coverage in mainstream media include an increased focus on "hyper-local" news; "story fatigue" from years of HIV/AIDS coverage; greater focus on epidemics and disasters; and the increasing number of advocacy groups starting their own news services.

Placing global health stories is a big challenge, agreed all four panelists. Who will want to run the story? What form – radio, documentary, print, online – will the story take? According to Murphy, some creative thinking may be needed: "It is global health, but that doesn't mean we always have to frame it in this box of global health. It will be global health no matter what we do, so I think it's also important for us to feed it into other events and issues that are important."

With the worst maternal and infant mortality rates in the Western Hemisphere, Haiti needs medical providers of all kinds, said Asarnow, but especially skilled birth attendants. The devastating earthquake in 2010 destroyed Haiti's only midwifery school, located in Port-au-Prince, killing many students and instructors. The school is still struggling to graduate a class of 15 people, she said.

In the rural town of Hinche, located in Haiti's Central Plateau region, Asarnow frequently visited a public hospital that provided pregnant women with free obstetric care. Yet, she said, "even with free care, there [were] still a lot of barriers for women coming to the hospital to get care." For example, the family members of expectant mothers had to provide sheets, clothing, food, and a bucket for personal needs. In addition, some women were too poor to afford transportation to and from the hospital.

Most women in Haiti, though, give birth at home with the help of traditional birth attendants, called matrones, Asarnow said. These matrones, popular in rural areas, are not formally educated in midwifery, but the government, along with non-profits such as Midwives for Haiti, have provided the matrones with training in basic health care and emergency situations.

Simply reporting on childbirth turned out to be a challenge, said Asarnow. "It's hard to get people interested in something that just happens to most women," she said; other more unusual health problems, such as infectious diseases, tend to garner more interest.

Health sovereignty, explained Murphy, is "the idea that nations have the right to make decisions about health and about how people are going to be treated" – an issue that is particularly pointed in Mozambique, where 50 percent of the national budget and 70 percent of the annual health budget is tied to international aid. 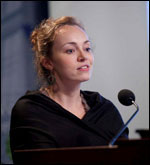 Mozambique, said Murphy, has only 1,000 doctors to serve a population of 22 million. By contrast, the country has an estimated 50,000 traditional healers. As a result, she said, most Mozambicans use traditional healing for at least part of their regular health care.

While researching traditional healers in the northern province of Tete, Murphy investigated a large Brazilian-owned coal mine that had displaced 5,000 local people when it was built. Mining is a major economic activity in Mozambique, yet mining companies are taxed a mere three percent by the government, said Murphy.

Health reporting doesn't have to only cover traditional health issues, said Murphy. "The environment, natural resources, and how a country earns its money very much have to do with the health of the people who are living there," she said. "How can you talk about being sovereign and providing health to your citizens if you don't have the money to do that?"

Treating the Over-Treatment of Malaria in Uganda

"Malaria is quite over-treated" in Uganda, said Balderas. There's the "idea that if you have a fever, you have malaria." Consequently, the rate of misdiagnosis can reach alarming rates in some areas, she said.

Balderas said an estimated 50 percent of Ugandans get free treatment through the public sector. However, only donor-funded facilities are equipped with the rapid diagnosis test (or RDT), which takes only 20 minutes to determine the presence of malaria in a blood sample, she said. If these facilities were more widespread, misdiagnoses rates could easily be lowered. 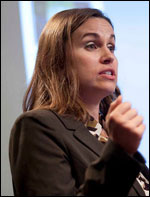 Other challenges to the accurate diagnosis and treatment of malaria include faulty equipment, shortages of electricity and lab technicians, human error, corruption, bureaucratic entanglements, and presumptive diagnoses. For example, sometimes health workers do not know what is causing a patient's fever, Balderas said, but they prescribe malaria treatments anyway because "they want to be able to give someone a treatment; they want to feel like they're helping people."

"There are certainly a ton of issues that relate to health," Balderas said, such as poverty and corruption. Everyone she interviewed in Uganda – with the exception of government officials – identified the corruption in the country's drug sector as a key problem.

Helping "Africa" One Small Story at a Time

Inspired by a World Health Organization study, which found "at least a 60 percent reduction in HIV infection among men who were circumcised," Kim went to Botswana to investigate infant circumcision, a practice that is gaining popularity but is still alien. "I would meet people in the course of my day and they would ask me what I was doing there and I would talk about circumcision. They'd say, ‘Oh, I really want to get my baby circumcised. How do I do that?'" she reported. 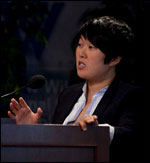 The most powerful moment of her trip, said Kim, came when she was researching cervical cancer – the number one cancer among women in Botswana. As she waited with a woman to receive her lab results, Kim asked her if she was nervous. The woman, who was HIV-positive, said, "Yeah, I'm really worried. To me, it would be worse to get cervical cancer than to have HIV." Even though Botswana is a middle-income country, said Kim, there are far more resources available to treat HIV than cancer.

Kim said that when presenting her work it was important for her to bring in the human element and not just the statistics: "I hope that, in whatever small way, even these small stories will help get issues in various countries on the map, especially in Africa where we tend to think of it as ‘Africa' and not so much as different countries with different personalities and different situations." 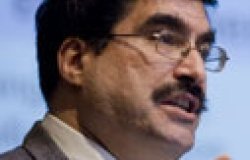