Russia Goes to the Polls

Russia Goes to the Polls

On September 13, Russians voted in various local elections, including 18 gubernatorial elections, 11 regional parliamentary elections, and 22 local council elections. These elections took place in the midst of several domestic and foreign crises, including the recent poisoning of Russian opposition politician Alexei Navalny, ongoing protests in the Far East, protests in neighboring Belarus, and the coronavirus pandemic. This was also the first election after the constitutional plebiscite in June 2020, and some thought it would serve as a regional response to the results of that plebiscite. Nikolai Petrov, Regina Smyth, and Maxim Trudolyubov discussed the results of the elections and their possible impact on the current political landscape in Russia.

Nikolai Petrov
There are two general components of what can be called the Kremlin's success. The first, there was a kind of sterilization of elections in a way which did not allow any probable competitors, even loyal competitors, to participate in a majority of the races after the Kremlin got a very negative experience in 2018 elections. [...] The general conclusion after all these local victories and failures could be that in the case that there was real local activism and, unfortunately, it wasn't a very typical situation this time, so in case of real serious politicians who are eager to invest efforts, who are eager to invest money and enter campaigns, it is possible to fight, it is possible to win against the Kremlin, to win against the party of power, but in this case there was pacifism and no opposition competed well or intensively in the elections.

In the case of the gubernatorial elections, in many cases the results were similar to Lukashenko's results in August. Many of them reported about 80% or something between 70% and 80%, so [...] it didn't cause any scandals or any mass protests but it's understandable that this result has been achieved due to the fact that there were two days of absolutely uncontrolled voting when it was possible and in some regions they got 60% of votes during not the voting day but during these open voting dates. What is important I think is also the fact that turnout was pretty low so this was another component of the victory for the Kremlin. If turnout is low, than the share of those controlled by the administration is higher, and it's much easier it get good numbers in favor of Kremlin-backed candidates.

Regina Smyth
“This is a performance of state confidence in one critical area. We often think of the Russian state as struggling but here in the management of elections, it’s really got the system down to a science. So what do we learn about the regime from the exercise? It’s that its capacity to manufacture votes is very strong. It has an astounding ability to adapt to the conditions across districts and regions, and to adjust their strategy across those geographic areas.”

“There is some science (at least in Moscow and St. Petersburg) that smart vote candidates, even from the Communist Party or other parties, continue to be in dialogue. There is a process of dialogue in change that happens. That’s a very small scale, but it is a smart scale. I don’t think smart voting is entirely out there to demonstrate or to just have anybody but United Russia. It’s to show people that if they engage and coordinate, they can make a change - a small change. It is a preparation; just as the regime is preparing for 2021, so is the opposition. And so here, we are saying ‘OK if we have some big wins, they become really important signals that change is possible’. And I think this is more an information campaign than an electoral component of the campaign.”

“I want to reiterate that I don’t think that this election tells us anything about Russian people’s opinion. It is too controlled, far too controlled, too sterilized. We are all searching for language. We need new language about how to describe this, what happened. But I don’t think it tells us anything about people. But I do know that Russians are conservative in the sense that they don’t want big change and so it seems unlikely that they'll push to the extremes if given the choice. They’ll elect people that are familiar to them, they’ll elect people that have local reputations, they’ll elect successful businessmen.”

Maxim Trudolyubov
“There were two competing views of where Russia’s political process [was] going, which way. Is it gradually moving towards becoming more liberal? In the sense that the access is more open, more people can get elected, younger people with more genuine popularity, grassroots support? Or [is it] moving in the direction of more managed, technical, essentially campaign management techniques, where everything is under control? I think this election [has], in a way, peaked as probably the most managed [election] that I have seen so far. The Kremlin has been incredibly successful, I think, in achieving almost everything they wanted at this election.”

“The question remains where, and at what point, real politics will jump out of the box. I’ve been seeing for the past years, political managers have been pushing the lid on the powder keg that is politics closer, tighter, and tighter. And they’ve been successful at that. The question is when it comes out. And it has not so far.”

“People in Russia divide not in the sense that some things are great and they vote for Putin and others think everything is bad and they vote against Putin or the kremlin appointed candidate. The divide is between the people who think that everything is not particularly good and they believe in politics and they think that things can be changed through a political process. And [there are] those who think things are also not good, they just don’t believe in politics. They don’t see how any political process can change that. And the latter, those who don’t believe in politics, they’re just a majority. There are more of them than those that are naive enough to join real political movements.” 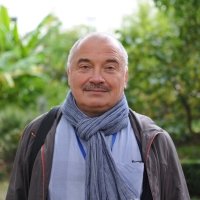 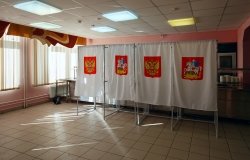