South Korea and the U.S. Pivot to Asia

As the United States focuses more attention to Asia politically, economically, and militarily, South Korea is reassessing its own role in ensuring stability in the region. Can Seoul and Washington work more closely together to further security and prosperity between the two countries and across the Asia-Pacific? How will the U.S. pivot toward Asia impact Washington’s security alliance with South Korea? Will the possibility of South Korea joining the Trans-Pacific Partnership help or hinder the U.S.-South Korea free trade agreement?

South Korea and the U.S. Pivot to Asia

South Korea and the U.S. Rebalance Toward Asia

When Park Geun-hye meets with Barack Obama for the first time as South Korea’s newly elected president in May, the two leaders will be tasked with addressing the challenges facing their respective countries on a national, bilateral, and regional basis. Relations between Seoul and Washington are perhaps now stronger than they ever have been since the signing of the bilateral military alliance 60 years ago. At the same time, however, the two countries are facing new hurdles that will require a deepening of existing ties amid growing tensions facing the Asia-Pacific region. A surge in China’s political power and economic might, and increasing hostilities from North Korea have certainly increased anxieties about the region’s outlook. In the face of such rising conflicts, the alliance between South Korea and the United States is expected to strengthen further as the region undergoes sweeping changes.

At a joint conference by the Woodrow Wilson International Center for Scholars and the Woodrow Wilson International Center for Scholars held on April 3, nearly 200 participants gathered in Washington to discuss future political, military, and economic relations between the two countries. As Washington looks to rebalance its presence increasingly toward Asia, how its security alliance with Seoul is one of a number of key issues that are closely examined by top analysts and policymakers from both countries.

A new approach to dealing with North Korea 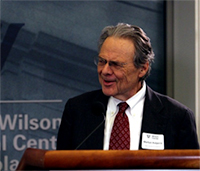 In his luncheon remarks starting off the half-day conference, keynote speaker Morton Halperin focused on the threat North Korea poses to security in the Asia-Pacific, and called for a fundamental shift in how the United States as well as South Korea deals with Pyongyang. Specifically, the former director of policy planning at the State Department and former senior director for democracy at the National Security Council, cautioned against accepting North Korea as a nuclear power, as it would set back global non-proliferation efforts, and make it more difficult to prevent Iran from developing nuclear weapons as well. Halperin also pointed out the need to develop a comprehensive approach toward North Korea. He argued that the six-party talks “have out-lived their usefulness,” and are no longer a viable way to reach a solution. Nor is the prospect of economic aid a way to bring Pyongyang into the fold of the international community, he added.

“Bilateral conversations and negotiations are the way forward,” Halperin said, stressing the need for Washington to take the lead in negotiating with Pyongyang. Once interest is expressed, then Seoul and Tokyo could join in the discussions, he continued.

Halperin’s proposal looks to abandon the six-party talks approach, and instead have Pyongyang firstly with Washington. Once a preliminary agreement is reached between the two sides, then Seoul, Tokyo, and Beijing as well as Moscow could enter the discussions. 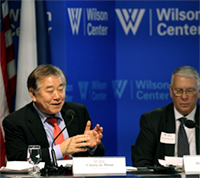 The challenges of dealing with political change and the future of the South Korea-U.S. alliance were discussed in the first panel following the luncheon. Moderated by Yonsei University professor Chung-in Moon, three members of the Korean National Assembly and a former member of the U.S. Congress as well as one U.S. academic took part in the two-hour discussion. Yoon-Joe Shim, a member of the ruling Saenuri Party, said that while the bilateral alliance was crucial for ensuring security on the Korean peninsula and in the Asia-Pacific region at large, cooperation regarding nuclear energy was one key issue that needs to be addressed in order for the alliance to strengthen in the future. Both Jae Kyung Kim of the Saenuri Party and Seung Hee You of the opposition Democratic Union Party agreed that while most Koreans are against the country developing nuclear weapons, they nonetheless want to have the ability to reprocess nuclear materials, as the Japanese currently are able to.

Yet Korean Economic Institute president and former Illinois Congressman Donald Manzullo cautioned that Korea needs to develop the technology, including establishing the ability store, nuclear waste, before the possibility of reprocessing can be addressed. Shim stressed, however, that there was great “discontent” within South Korea about restrictions imposed on the country in developing nuclear energy by the United States. He added that this should be a major issue to be addressed when President Park Geung-hye meets with President Barack Obama during her May visit to Washington. 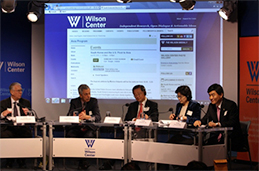 As for future relations with North Korea, Princeton professor and former Wilson Center scholar Gilbert Rozman noted that regime change would not be as easy as some are arguing it could be. Indeed, those who are expecting a sudden change in Pyongyang are looking for an “easy way out” to a situation that remains mired with complications, he warned. Korean parliamentarians too agreed with Rozman’s assessment that it would be folly to expect any significant change in the North Korean regime. Shim added that China could play a positive role in ensuring behavioral change from Pyongyang that could lead to stability in the region, which is a position that has been challenged by others.

Trade and economic outlook between South Korea, the United States, and beyond

The bilateral trade pact signed between Seoul and Washington in 2012 was much-touted as the most significant development in economic ties in recent years. Capital flow between the two countries has increased since, and adopting common regulatory standards have facilitated trade relations. Still, critics have argued that the KORUS trade agreement has not yet had much to show for in its first year of existence either for the United States or for South Korea. Proponents, on the other hand, counter that it usually takes a number of years for concrete positive results from free trade agreements to become apparent.

Bilateral and multilateral trade agreements drew most of the attention during the second panel discussion on economic cooperation, trade, and investment between South Korea and the United States. U.S. assistant trade representative for Japan, Korea, and APEC affairs Wendy Cutler said the Korea-U.S. free trade agreement has successfully increased exports from both the United States and South Korea since the bilateral pact was signed a year ago. Drawing a crowd of financial journalists, Cutler told the audience that joining the Trans-Pacific Partnership agreement would be “natural and logical” for South Korea, given the overlaps between the bilateral and multilateral pacts.

Fred Bergsten, director emeritus of the Peterson Institute for International Economics, agreed with Cutler’s assessment, pointing out that while Japan will be able to develop stronger ties with the United States as a result of joining the TPP, ties between the United States and South Korea may falter should Seoul not sign on to TPP. At the same time, Bergsten noted that there were two tracks for trade pacts in the region, one that includes the United States through the TPP arrangement, which in turn would exclude China. The other path would focus on Asia and keep China involved, while keeping out the United States. Those two options may turn into new sources of political as well as economic conflict, Bergsten warned.

Yet the Korean panelists were hesitant to embrace the view that joining the TPP should be the end goal for Seoul. Indeed, Gheewan Kim, the economics minister for the Korean embassy in Washington, noted the political opposition to trade deals, and stressed the need for advocates to make the benefits of free trade clearer.

Hun Seung Lee, member of the Saenuri Party, reiterated Bergsten’s point that TPP was only one of several trade options available to Korea. In particular, he pointed out Korea’s option of carving out new trade relations with China either through the Regional Comprehensive Economic Partnership agreement (RCEP) or the trilateral China-Japan-South Korea free trade agreement. Both options, which are still in the negotiation stage, are being considered by Seoul as possible trade pacts even as it mulls the possibility of joining the TPP.

Choong Yong Ahn, ombudsman for foreign investment with the Korea Trade Promotion Corporation, he stressed the need for the United States to push Japan to open all its markets, including the politically sensitive agricultural industry. Japan applied for TPP membership in March, and there is already speculation that rice could be exempt from global rules in an effort to bring Tokyo into the fold. Ahn also argued that while South Korea’s allure as a destination for U.S. investors has strengthened since the signing of the KORUS pact, the attractiveness of northeast Asia region as a whole as an investment hub will only continue to gain momentum.

Certainly, TPP is not the sole path for South Korea to take as it looks to enhance market access across Asia and beyond. Washington and Seoul may disagree on that point, but participants from both sides agreed nonetheless that closer economic ties will play an integral role in cementing relations between the United States and South Korea. All participants agreed that given the political and security as well as economic challenges facing the Asia-Pacific region, it remains in the interest of both countries to continue deepening the U.S.-Korea alliance.