Skip to main content
Support
Explore More
Close
Audio
Science and Technology
"The Hacker and the State," or "We're Not Talking About Coronavirus"
Share on FacebookShare on TwitterShare via Email
Share
Event

A State of Un-Peace: the EU’s Response to Asymmetric Threats

A conversation between the Hon. Jane Harman and Sir Julian King on the transatlantic response to asymmetric threats.

A State of Un-Peace: the EU’s Response to Asymmetric Threats

In this conversation between the Honorable Jane Harman, President and CEO of the Wilson Center, and Sir Julian King, European Commissioner for the Security Union, the Commissioner addressed the EU response to increased acts of terrorism, extremist violence, cyber malign activity, and hybrid threats. President Harman and Commissioner King discussed what response is needed to address these new challenges, and the importance of transatlantic cooperation in deterrence and conflict prevention.

“What is this state of affairs, un-peace? It’s not the name of some new, snazzy UN agency. Rather, it’s the state of international relations that has much in common with other words sharing the same prefix – unease, unrest, uncertainty. You could, of course, argue, with some justification, that the Cold War was a period of un-peace. But the very fact that it was termed a war implies that, in the minds of government and public at the time, they knew there was a sense of conflict…. The difference today, I think, can be categorized in terms of three things: threat actors, threat vectors, and thresholds. In the past, it was easier to determine who was attacking you, how they were doing it, and when the line between peace and war was at risk of being crossed.”

“In the old days, the U.S.S.R. was clearly the ‘bad guys’; there was no question of where the threat was emanating from. Yes, there were various different theaters around the world where this conflict was playing out – sometimes kinetic, sometimes not. But it was pretty clear who your allies were, and, most importantly, who the enemy was. And that’s not so clear anymore, not since 9/11…. The threat comes from state as well as non-state actors; some with motives that are clear, some much less so.”

“Today, the concept of total war has taken on a whole new dimension – not in terms of saturation bombing, but, rather, insofar that effectively nothing is off-limits. Infrastructure, culture, social media, public administration, public services, information, economy; the lists, like threat surface, is endless. The tools are equally diffuse ... The rules have been redrawn, indeed, sometimes it seems there aren’t any.”

“While it’s always been possible to say one thing whilst doing another (something of an art form in the Soviet era), it was nevertheless pretty clear if your tanks started to rumble across the border into Afghanistan. There was not much plausible deniability about that. However, in today’s world, short of deployment of conventional military means, the proliferation of channels and tools makes it possible to accomplish traditional military objectives – for example, annexing part of a neighboring country – without necessarily or immediately triggering the threshold between peace and conflict.”

“Often, the arsenal being that is being deployed is hybrid, rather than conventional. That not only redefines the threat vectors, but also the threat surface. And it means that previously civilian operations, like the European Union find themselves, sometimes, on the front line of risk mitigation and threat deterrence.”

“We’re going, as much as ever, to need to work with our allies and like-minded partners – notably the U.S. – to protect and promote our shared values, and protect against those who are seeking to do us harm. NATO is going to remain absolutely vital, but the European Union has a role and a responsibility as a security actor. It’s going to need to step up.”

“I think it’s really important that we recognize that the EU can, and should, play a role on these security issues. Not alone, working very closely with like-minded partners, like-minded organizations, notably NATO. There are, undoubtedly, an increased number of obstacles on the path to ensuring the security of our citizens in the un-peace of today, but as Woodrow Wilson himself once said, ‘The only use of an obstacle is to be overcome.’”

Photo credit: US Department of State 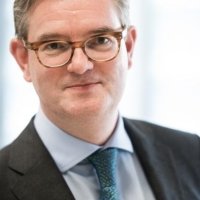 European Commissioner for the Security Union

Article
Science and Technology
Digital Privacy in the Time of COVID-19
By Stuart Brotman on March 17, 2020