From Summitry to Standoff: What's Next for India-China Relations?

Indian Prime Minister Narendra Modi and Chinese President Xi Jinping have tried for several years to stabilize India-China relations and pacify their contested border through summitry. In two informal meetings--one hosted by Xi in Wuhan in 2018 and one hosted by Modi near Chennai in 2019--they emphasized common interests and called for dialogue to resolve territorial disputes. Despite these efforts, recent weeks have seen fistfights between the two powers' militaries in Sikkim, followed by a tense standoff in Ladakh that included a deadly clash--the first combat deaths along the disputed border in 45 years. Please join us for a discussion of India-China relations and a look at whether summitry alone can guide peaceful relations and ease border tension between the world's two most populous nations. The discussion will also highlight popular views in both countries of India-China cooperation and competition.

“I think it’s quite clear that, at least from both governments, there’s a conviction that somehow this will deescalate. Though domestically, both sides have a lot of nationalism and emotions to vent.”

“The fact that the trilateral meeting between China, India, and Russia was able to happen, I think that also is a positive sign, including the, that also applies to the second meeting between the senior military leaders on the ground that happened in the past two days. So if we believe that the past examples could act as a precedence, then this will eventually deescalate and stabilize.”

“I always argue that China, or any country, or any great power, has more room to accommodate when it feels strong, and when it feels it’s not in a weak spot. But when they do feel vulnerable and they do feel the strategic pressure, the most likely scenario is that they’re going to take the more assertive approach, and this is also true when we look at ‘Wolf Warrior Diplomacy’ from China since the beginning of the COVID-19 this time.”

“After [Indian] independence, of course, everything was opened in a way because the Chinese, the new People’s Republic, was expanding its control into the peripheral areas of the country. India was also beginning to administer and also impress upon the rest of the world that its borders were in the Himalayas, and there was really nothing to question about these borders, which really led to the decision to show our boundary in these maps are defined, the assumption being that it had been agreed upon with China, which then became open to question because from 1959 on, the Chinese began to question that boundary. That’s led of course to the beginnings of this dispute and then the slide and descent into war in 1962. Be that as it may, coming to the fact that we’ve never had bloodshed on this line of actual control, for 45 years, a fact that was thought to be reinforced and protected in a sense in the agreement signed between India and China to maintain peace and tranquility in these areas and to strengthen confidence-building.”

“India has carefully navigated the course of its growing ties with the United States with full and 360-degree awareness of where it stands in the region and the sensitivity of ties with China. Our relationship with the U.S. and Japan are particularly strong, not because it’s anti-China, but it brings benefits for India in terms of our development, the flow of capital, infrastructure building, especially with Japan, technology, innovation, and with the United States, in our dialogue on counterterrorism, multilateral cooperation in general, scientific research, public health, and strong people-to-people ties. The defense and security partnership has grown much stronger, but that is because we want to create a stronger web of interest to preserve respect for international law, established codes of conduct, the strengthening of the interdependence and interoperability because we feel we want a peaceful regional order that preserves freedom of navigation, lines of maritime communication, the free passage of international trade so much of it including India’s trade that passes through the Indian Ocean and the straights of Melaka, and energy security among others.”

“This is the working of a parliamentary democracy where you often have very nationalistic statements about ensuring that national interests are always preserved and protected by whoever the government is in power. But India has always been committed, especially with China, to resolving the differences that exist over the Aksai Chin and the problem of territorial differences through peaceful negotiation. That is why I’ve said we’ve had the success of agreements since 1993, also with the mechanism of the special representatives that even arrived at a set of guidelines political parameters and guiding principles for the settlement of the boundary question. I think we need to work on the positive and stress the positive, accentuate the positiveーas the popular song goesーI think we need to do that rather than looking at the negative downside of whatever each side has done in the past.”

External link
Border Security
Opinion: What we need to learn from the U.S. border closure and how to avoid repeating our mistakes 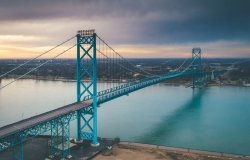