Challenges, Lessons Learned, and Opportunities for Peacebuilding in Transboundary River Basins, including the Eastern Nile Basin

This event analyzed the key security challenges in transboundary river basins (including the Eastern Nile Basin), assessed responses and frameworks that have sought to address the intertwined challenges to peacebuilding and water governance, and offered lessons learned and recommendations for improving shared water resource management and peacebuilding in shared river basins.

Mr. Bruch began his remarks by pointing to what he described as the biggest challenge to peace in the Eastern Nile Basin: the failure of political will to resolve conflict. The drivers of this failure, he suggested, included rapid climate change, population growth, and a history of internal conflict—all exasperated by institutions either unwilling or unable to cooperate with one another. Mr. Bruch noted that these institutions were hindered by a lack of capacity to manage the escalated levels of conflict in the Eastern Nile Basin. To combat this, Mr. Bruch suggested a harder push for effective legal and institutional regimes that distributed their investments throughout the region while adapting to the challenges that climate change may bring. In his closing comments, Mr. Bruch pointed out two integral groups that he felt were often left out of Eastern Nile Basin discussions: local communities and women. Mr. Bruch emphasized that peace processes and water projects are more sustainable when women are involved, and that without the inclusion of local communities that live along waters, any regime will have little success enforcing proposed water agreements.

Mr. Yetena began his remarks by focusing on how disputes over water governance and internal political instability have played a crucial role in the current environment of conflict and instability in the Eastern Nile Basin. He emphasized that the water governance disputes have broadly manifested from a historical water sharing framework which has been, and still is, perceived by many to be unbalanced. Mr. Yetena expanded on this by pointing out how border disputes left over from the colonial period continue to undermine water governance agreements, making it difficult to reach cooperative understandings. To tackle these issues, Mr. Yetena recommended a threefold approach. Firstly, he encouraged the African Union to lead negotiations in a short-term binding agreement between the nations involved in conflicts within the Eastern Nile Basin. Secondly, Mr. Yetena suggested the installation of a high-level panel to investigate the history of the Basin and its population to allow the countries involved to reach a demarcation agreement. Finally, Mr. Yetena urged for the inclusion of grassroots, civil society, and  local community actors within the Eastern Nile Basin in peacebuilding discussions, and encouraged regional cooperative water development projects in areas such as irrigation, agro processing, and hydropower, which he recommended could be partially facilitated through organizations like the World Bank, European Union, and the U.S. Department of State, among others. In his closing remarks Mr. Yetena stressed that it is up to Africans to decide if the Nile will become a curse or a resource.

Mr. Wong’s remarks discussed the internal and external causes of insecurity in the countries within the Eastern Nile Basin, examples of what the U.S. Government is doing to address such insecurity, and broad lessons learned or recommendations. Mr. Wong began by listing poverty, a history of conflict, ethic division, rebel groups, and weak democratic institutions susceptible to coups as key internal drivers of insecurity. He then described potential external factors including terrorist groups, territorial disputes, and competition for natural resources like water. He also offered cross-border humanitarian challenges, including famine, disease, and drought, as a third category of challenges within the Eastern Nile Basin region. Mr. Wong then provided examples of U.S. Government efforts to bolster peacebuilding and address water governance issues in the region, including the United States’ Global Water Strategy, which seeks to increase access to safe drinking water and sanitation services, protect fresh water resources, promote cooperation on shared waters, and strengthen water governance and financing. He explained how this strategy is being implemented, including through USAID’s Water for the World Priority Country Plans, which include cooperation between USAID and the United States Geological Survey on water exploration and hydrogeological studies, between USAID and the United States Forest Service on rangeland management, and through the U.S. Department of State on water resource mapping and training. Mr. Wong also noted that the U.S. Government is sponsoring scientific research on key water issues, before concluding with several lessons learned. First, he stressed that African governments have agency and that analysis of long-term leadership scenarios is needed. Second, he noted that the effects of insecurity can be a “vicious cycle.” Mr. Wong closed by posing questions to the audience as to what tools or interventions might be most useful in combatting cycles of insecurity, citing options such as international sanctions, action by African Regional Economic Communities (REC’s) or other economic commissions, U.S. military engagement through the United States Africa Command (AFRICOM) or United States Central Command, various U.S. Government regional strategies, and fora created by external (non-African) countries.

The Southern Voices Network for Peacebuilding:  Centering African knowledge and agency is key to building and sustaining peace in Africa. The Southern Voices Network for Peacebuilding (SVNP) works with the Wilson Center’s Africa Program to attain the most appropriate, cohesive, and inclusive policy frameworks and approaches for achieving sustainable peace in Africa. Generously funded by the Carnegie Corporation of New York since its establishment in 2011, the SVNP works to generate African knowledge to inform U.S. and international peacebuilding policies on Africa; help build the next generation of African peacebuilders through its scholarship program; and create a pan-African network of African peacebuilding organizations, practitioners, and experts to collaborate and share knowledge, best practices, and lessons learned on peacebuilding in Africa. 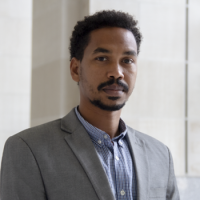