By Jean H. Lee on February 13, 2020
Share on FacebookShare on TwitterShare via Email
Share
Part of the The Iran Nuclear Deal: Commentary and Context
Event

The Iran Nuclear Deal: The View from the Region

Four analysts and observers of Iran and Middle Eastern politics assessed the state of the current deal, the implications of this accord, and the consequences for the region.

The Iran Nuclear Deal: The View from the Region

Four experts assessed the state of the current deal between Iran and the P5+1, particularly its implications and consequences of this accord for the region.

Al Wari opened with a discussion Gulf Cooperation Council’s (GCC) reactions—specifically the United Arab Emirates (UAE)—to the nuclear deal. He asserted that the Gulf’s concerns were not about the deal itself, but rather Iran’s regional policies and perceived expansion the day after. However, the GCC trusts President Obama’s commitment to stopping any Iranian acquisition of the bomb. He stated that sectarianism is not the cause of regional tensions, but rather recent events encourage sectarianism, and sectarianism exacerbates regional politics.

Amos spoke of her recent visits to the region, explaining that the deal seems irrelevant to daily life but that is where it will be tested. She noted that the deal did not engage with any regional politics but that Iran will benefit from its newfound status as a generally untouched market opening to the world. She emphasized that Gulf Arab States worry about Washington’s and other capitals’ rising interest in Iran. She also highlighted Oman’s unique relationship with Iran as a member of the GCC, and that it could play a role in upcoming regional events.

Brom analyzed the deal from the Israeli perspective, which focused on the nuclear weapons instead of regional tensions. Israeli Prime Minister Benjamin Netanyahu made the Iranian nuclear threat the centerpiece of his foreign policy during the last parliamentary elections. Netanyahu believes that this platform is why he won a majority and that Iran truly is an existential threat, explaining his negative response to the agreement. However, not all Israelis are united against the deal and there are some strong dissenting voices arguing that a better deal could not have been reached.

Nazer offered a view from the Kingdom of Saudi Arabia (KSA), which has shifted from trying to prevent the deal to reconsidering and readjusting to it. He noted the number of high level U.S.-KSA meetings and the Saudi regional and global diplomatic campaign, which represents both the strength of U.S.-KSA relations despite disagreements over the deal and the KSA’s desire to expand its influence and visibility around the world. He also described KSA’s increasing interest in nuclear energy for domestic energy purposes, committing more than $80 billion towards a program.

Barkey asked Amos if Syria would be a test case for the consequences of the deal. She surmised that it would be but due to its complicated and protracted nature, the Syria crisis might be last to see a positive change and Yemen may be the first. Barkey asked Brom given the setbacks in Syria, if the Iranian position is weakening. Brom replied that this was possible as it may have overextended through its proxies and lost its soft power with the Arab Spring and decline of Syrian President Bashar al-Assad’s power. He also noted Iran’s decreasing support for Hezbollah. Harman asked what the view of the youth in the region might be to the deal, citing the significant youth bulge in regional population data. Al Wari said that overall youth are not actively concerned with the deal, but Amos followed up by emphasizing that Iranian youth see the deal as a very positive and hopeful event. Reacting to a question on the regional view of Iran’s ability to comprise, Al Wari explained the Arab world sees two Irans, one of President Rouhani and Foreign Minister Zarif who seem more amenable and that of Supreme Leader Ayatollah Khamenei and Al-Quds Elite Forces Commander Qassem Soleimani who the Arab World perceives as significantly more aggressive in the region and hardline on domestic issues. Nazer noted that Assad is reviled by many in Saudi and the Gulf countries, which contributes to the negative view of Iran. 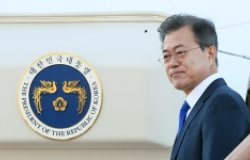 Blog post
Nuclear Weapons
Where Does It Stand and Where Should It Shift? A South Korean Perspective on North Korea Nuclear Diplomacy
By Jungkun Seo on April 9, 2019