This event is part of The National Conversation series, which provides a safe political space for deep dialogue and informed discussion on the most significant problems and challenges facing the nation and the world. 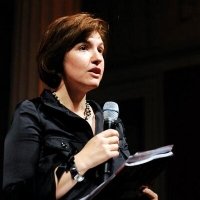