The Other Side of the Indian Growth Story: Confronting Agriculture and Rural Development

Experts discuss how and why agriculture and rural development factor into long-term economic growth and poverty reduction in India.

The Other Side of the Indian Growth Story: Confronting Agriculture and Rural Development

This Asia Program event, co-sponsored with the Environmental Change and Security Program of the Wilson Center, asked the important question of how and why agriculture and rural development factor into long-term economic growth and poverty reduction in India. Reducing world poverty is the first of the Millennium Development Goals (MDGs) chosen by the international community. Addressing world poverty requires the examination of rural development, as 3 out of every 4 people experiencing poverty in developing countries are rural, and the vast majority depend directly or indirectly on agriculture. In India, two-thirds of the population is rural, the vast majority of them engaged in agriculture. With soaring economic growth rates dominating the international news coverage on India, the issues of rural development and agriculture have been effectively marginalized. The purpose of this event was to focus on rural and agricultural India, which is of particular salience for the current government of Prime Minister Manmohan Singh, which rose to power in 2004 after it pledged to improve the conditions of India's rural poor.

Arvind Panagariya commenced by arguing that agricultural growth and rural development constitute the most important growth story. Economic growth, he pointed out, is a means to an end, and the end goal should be poverty reduction. Agriculture, Panagariya stated, is the "irony, or rather, the tragedy of India, in that three-fifths of the national workforce are engaged in farming and yet farming comprises merely 16 percent of the national GDP." The key challenge to agricultural growth in India is the lack of rural infrastructure, particularly rural roads and electricity. A second challenge to agricultural growth is the state's provision of subsidies that are disproportionately allocated to farmers who are relatively well-off. A fairer and more efficient allocation of resources would be to invest in rural infrastructure and agricultural extension services, rather than subsidies. The central problem in India's transformation to an industrialized economy lies in the absence of a strong manufacturing industry that can facilitate broad-based employment in labor-intensive and low-wage sectors, like that in China. Such a transformation is essential, Panagariya stressed, in order to "lift up the excess poor from rural and agricultural sectors."

Suresh Babu asserted that low agricultural productivity in India is primarily due to the lack of investment in agricultural research and development, the widening income disparity between rural farmers and urban consumers, and the fact that Indian farmers are not being mainstreamed into the recent economic growth in the nation. The Green Revolution period of agricultural growth in India, from the late 1960s until the late 1970s, was based on the three pillars of agricultural extension systems, irrigation schemes, and subsidies. However, Babu stated that "today this system has collapsed leading to a decrease in agricultural yields," and resulting in the globalization of agriculture through biotechnology and exports of popular agricultural commodities, such as mangoes. However, Babu maintained that it is imperative to address agricultural productivity in order to achieve long-term national stability and growth in India. Achieving agricultural productivity means tackling the constraints faced by farmers in the current rural context of inadequate irrigation facilities, fragmented land holdings, low technology application, increasing input costs, and high levels of debts incurred by farmers and owed to rural moneylenders.

Commentator Derek Byerlee revealed that the World Development Report (WDR)—the annual flagship report of the World Bank which influences the development agenda across international development organizations and agencies—is addressing agriculture in the 2008 report for the first time in 26 years. Byerlee stated that agriculture growth is necessary for poverty reduction in what the WDR terms "transforming countries," such as those in South Asia, some parts of the Middle East, and North Africa. Transforming countries are characterized by deep income disparity between rural and urban areas, as is the case in India. Addressing the challenge of inequality in transforming countries requires structural shifts in the national economy, such as the creation of a strong manufacturing sector where the rural poor can be offered stable employment. Byerlee concurred with Panagariya as he pointed out that there is a "mis-investment," rather than a lack of investment, in the rural sector—in that agricultural subsidies are three times the amount of public investment for rural development. The national political economy of subsidies in India is a key issue, as subsidies currently go to the wealthiest states and the relatively wealthier farmers nationwide. Subsidies also increase the price of food, which is unfavorable to the economically marginalized sectors of Indian society, such as smallholder and landless farmers, who are net food buyers and thus need access to cheap food. 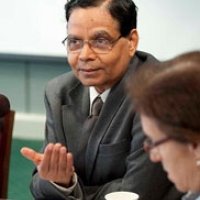