A conversation between the Right Honorable Catherine Ashton, Chair of the Wilson Center's Global Europe Program, and the Honorable Nasser Judeh, former Foreign Minister of Jordan on the geopolitical challenges and opportunities for Euro-Mideast diplomacy, economic development, trade and investments, the global refugee crisis, among other issues.

The Wilson Center was honored to host a dialogue between Baroness Cathy Ashton, former EU Representative for Foreign Affairs and current member of the British House of Lords, and the Honorable Nasser Judeh, Senator in Jordan's Parliament and former Foreign Minister, on the present and future of Euro-Mideast relations. Europe has a rich historical relationship with the Middle East marked by shared values and common interests in maintaining peace and security in the region, as well as promoting mutually beneficial socio-economic policies. The discussion focused on a wide array of complex issues; geopolitical challenges and opportunities for Euro-Mideast diplomacy, economic development, trade and investments, the global refugee crisis, Arab-Israeli peace, and inter-regional security cooperation. Additionally, the talk underscored the geostrategic importance of Jordan in relation to its neighbors and the world, the conditions and implications of Jordan’s current trajectory, and various factors imperative to Jordan’s future success.

“The big question is how to support people that feel that they have to get out. Most people want to stay at home. People don’t leave their own nation easily or willingly. They do it often in desperation, either because of a conflict, or because of what you might call politics, or because they don’t see economic opportunity.”

“It’s very important that you look at Jordan in that context – a modern, forward-looking country, a highly educated society, very young, looking for opportunities, facing serious economic challenges, trying to be a voice of reason in a volatile region, and, in a lot of cases, succeeding.” 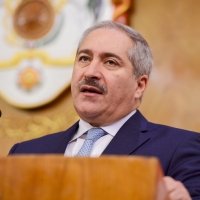 Audio
Terrorism
AfPak File: What Does The Killing Of Soleimani Mean For Afghanistan And Pakistan?