The Trump Administration and U.S. Africa Policy: What has been accomplished and what lies ahead?

A conversation with Assistant Secretary of State for African Affairs, Ambassador Tibor Nagy on "The Trump Administration and U.S. Africa Policy: What has been accomplished and what lies ahead?"

On March 3, 2020 the Wilson Center Africa Program hosted a discussion with Ambassador Tibor Nagy, Assistant Secretary of State for African Affairs, on “The Trump Administration and U.S. Africa Policy: What has been accomplished and what lies ahead?” This event built on the themes of Ambassador Nagy’s inaugural visit to the Wilson Center in August 2018, with Ambassador Nagy reflecting on what has been accomplished in U.S. Africa policy since he stepped into his current role, what challenges remain, and the path forward for U.S.-Africa relations.

Ambassador Nagy stressed that he remains an “Afro-Optimist,” and that Africa is getting the attention it deserves from the U.S. administration as evidenced in part by the senior leader travel and engagement with the continent, including his visits to more than 25 African countries, and Secretary Pompeo’s recent visit to the continent. He noted that he has focused on the four priorities he laid down in 2018: harnessing the potential of Africa’s youth as a force for ingenuity and prosperity, working with African governments to create a level playing field for U.S. companies and encourage U.S. companies to do business in Africa, advancing peace and security through partnerships with African governments and regional mechanisms, and countering China’s narrative and making clear that the breadth and depth of the U.S. commitment to Africa is unmatched. Ambassador Nagy also underlined the importance of engaging with the African diaspora in the United States.

Ambassador Nagy pointed to some of the positive changes taking place on the continent. He highlighted three countries in particular as examples of recent success stories: Ethiopia, the Democratic Republic of the Congo, and Sudan. He emphasized that the U.S. is supporting these countries as they undergo their respective reforms and transitions. Ambassador Nagy also highlighted several U.S. initiatives to enhance the U.S. economic partnership with Africa, engage with African youth, and challenge China’s narrative on the continent. Major economic initiatives included the Better Utilization of Investment Leading to Development (BUILD) Act and the U.S. International Development Finance Corporation (DFC), the 2X Africa Initiative, Prosper Africa, “Deal Teams” based in U.S. embassies, the Millennium Challenge Corporation, the 20th anniversary of the African Growth and Opportunity Act (AGOA), U.S. support for the Africa Continental Free Trade Agreement (AfCFTA), and bilateral trade negotiations with African countries including Kenya. Key initiatives focused on youth include the Young African Leaders Initiative (YALI) and the new University Partnerships Initiative to strengthen ties between U.S. and African higher education institutions. He observed that some important challenges facing Africa today include Violent Extremist Organizations spreading from the Sahel to coastal West Africa, instability in Somalia, governance and other domestic problems in Cameroon and Zimbabwe, and the peace processes in the Central African Republic and South Sudan.

After his remarks, Ambassador Nagy engaged with the audience in a moderated question and answer session. Questions from the audience focused on a wide range of topics, including the framing of China’s engagement in Africa by the U.S., concerns over the attention given to Africa by the administration, balancing economic engagement to include SMEs and not just major companies and extractive industries, preparations for COVID-19, Nigeria and visa restrictions, the crisis in Cameroon, and violent extremism in the Sahel. During the discussion, Ambassador Nagy again underlined U.S. support for Africa, including through key initiatives such as the President’s Emergency Plan for AIDS Relief (PEPFAR).

“The country [Democratic Republic of the Congo] may finally be turning a corner, in terms of containment of the Ebola outbreak. HHS Secretary [Alex] Azar, USAID Administrator [Mark] Green, and other senior U.S. health officials visited eastern DRC over the last year to strengthen joint efforts to contain the outbreak. The United States remains the largest single-country donor to helping the Congolese combat the spread of Ebola.”

“In a matter of months, Sudan transitioned from an adversarial regime to a potential partner, and the United States played an important role bringing about a civilian-led transitional government. Soon after [Omar al-] Bashir’s ouster, we dispatched Deputy Assistant Secretary Makila James for an initial round of discussions with all the factions.”

“A youth tsunami is hitting Africa…At the forefront of our engagement with the continent’s youth is our Young African Leaders Initiative, or YALI…At every stop in my travels I meet with YALI alumni. These engagements have reinforced my belief that YALI participants and Mandela Washington Fellows are some of the most impressive young men and women in the world.”

“During the U.N. general assembly last September, my meetings with African leaders underscored that the U.S. is seen as an indispensable and trusted partner for Africa. I also promise you, that as long as I am in this job, I will continue to look for every opportunity to strengthen and expand America’s partnership with the continent. As we say in the Africa Bureau, ‘let’s continue to look at Africa through the windshield and not the review mirror.’”

“So you get to the point of, ‘so what’s going to happen in Africa?’ It’s a choice Africans are going to make…For a long time, when there was a knock on the door, it was the Chinese companies standing there, and we want to empower American companies to be able to step forward and participate in some of these projects. And we will do that more and more, because at the end of the day, U.S. companies transfer technology, they respect the laws of the country, they are not corrupt…but like I said…80% of life is showing up, and American companies have to show up.”

“To really create jobs in Africa, what you need is to get the medium and small U.S. businesses involved, because economically, they are the ones that create the most employment. They are also the ones that are the most risk-averse and may be unfamiliar with especially investing in places like Africa.”

“The Cameroonian government needs to get serious about a genuine peace process, genuine decentralization, genuine power to the local level.”

“Cameroon has pained me more than any other issue I’ve had to deal with. Human suffering is not philosophical ... I’ll never forget that as a little boy in Budapest during the Hungarian revolution, I saw people that had been run over by the Soviet tanks. And even when you’re 7 years old, that picture stays in your mind forever. I wish there was a magic bullet that we could fire to fix the situation.” 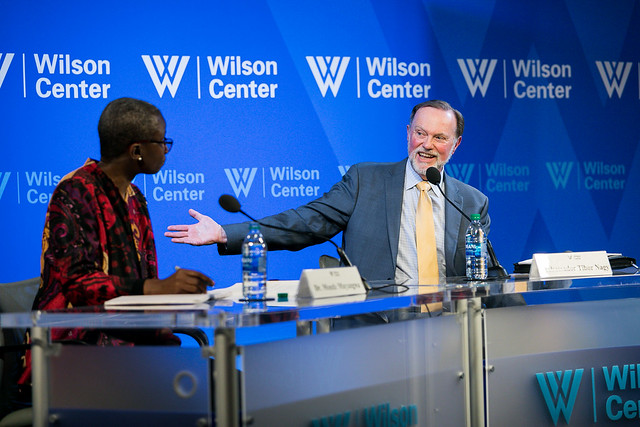