The Women in Public Service Project is pleased to welcome two principal negotiators of the Iran deal to discuss these challenges and opportunities the new administration and global community at large face as US-Iran relations continue to evolve: Baroness Catherine Ashton and Ambassador Wendy R. Sherman.

·         “This was an incredibly technically complicated agreement that required a lot of experts to burn the midnight oil, both at the talks and at home in the different countries.”

·         “Our ambition and hope was always that if you can make one agreement and build some trust and confidence in what you’re doing, it can lead you to other places. You can have other conversations; you maybe can do other things. It doesn’t always work like that. It may not work like that in this case, but it’s a hope. But unless you can deal with this particular negotiation, and deal with it in a way that does build that confidence, in a sense, in that time when we did it, you couldn’t move on to anything else because that was the big things that everybody was rightly, deeply concerned about.”

·         “I think the Iranians need to be very conscious that their world is changing, and the world they’re looking at is changing all the time. They’re going to have to think about what they do in the context of a new administration here.”

·         “As difficult as Iran is in the Middle East, if they had a nuclear weapon, their ability to project power into the Middle East and to deter our and our allies’ and partners’ actions would be profound, so this had to come off of the table in order to tackle the other issues. It just had to.”

·         “President Obama understood a very fundamental reality. The Iranians had mastered the entire nuclear fuel cycle. We could bomb away their facilities, but we can’t bomb away knowledge. So they would have been able to recreate those facilities, and probably would have done it in secret and underground, so he understood that and it was critical.”

·         “Many things could upend this. I think there are some, probably more on the Republican side than on the Democrat side, who would like to put enough pressure on so that Iran pulls out of the deal as opposed to us being responsible for it.”

Ever since the 1979 Iranian Revolution and subsequent hostage situation, Iran-US relations have been characterized by mutual misperceptions. The nuclear deal of June 2015 between Iran and the “P5+1” came to fruition against this backdrop, in large part due to the efforts of The Right Honourable Catherine Ashton, Baroness of Upholland, Former Vice President of the European Commission and former High Representative of the EU for Foreign Affairs and Security Policy and Ambassador Wendy R. Sherman, Senior Counselor at Albright Stonebridge Group and former Under Secretary of State for Political Affairs at the U.S. Department of State

The July 2015 deal was an unprecedented step towards rebuilding that trust, though tensions are being fueled by military cooperation with Russia in Syria and new sanctions announced by the Trump administration. The new administration faces familiar challenges in relations with Iran, but also some key strategic and economic opportunities. Rob Litwak, Vice President for Scholars and Academic Relations and Director, International Security Studies, will moderate a discussion between Baroness Ashton and Ambassador Sherman who well know these challenges and opportunities, and can speak to how the U.S. can appealing to their strategic interests using diplomacy and negotiations. 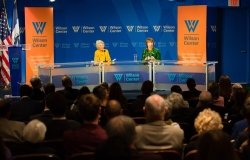 Event
Economics and Globalization
After Brexit: A Conversation with Baroness Catherine Ashton
On Wednesday, October 26, 2016 at 1:30 – 2:30 ET