LIVESTREAM ONLY
This event will be webcast
Stream will begin in approximately —:—:—

The lecture and discussion with Wilson Center Director, President and CEO Jane Harman serves as the formal launch of the Frederic V. Malek Public Service Leadership Fund in support of non-partisan global dialogue.

“To uphold the values of freedom-loving people everywhere, we’ve also called out the Chinese Communist Party for suppressing freedom of religion of the Chinese people. Millions of ethnic and religious minorities in China are struggling against the party’s efforts to eradicate their religious and cultural identities.”

“In response to America’s actions and resolve, some multinational corporations say our economic policies are too tough, and that advancing our interests and our values runs contrary to better relations with China. Needless to say, we see it very differently.”

“Despite the great power competition that is underway, and America’s growing strength, we want better for China. That’s why for the first time in decades, under President Donald Trump’s leadership, the United States is treating China’s leaders exactly how the leaders of any great world power should be treated—with respect. Yes, but also with consistency and candor. And in that spirit of candor, I must tell you that in the year since my Hudson speech, Beijing has still not taken significant action to improve our economic relationship.”

"Last July, the Director of the FBI told congress that of his agency’s one-thousand active investigations into intellectual property theft, the majority involved China. American enterprises continue to lose hundreds of billions of dollars each year in intellectual property theft. Behind these statistics are not just businesses, but people; families, dreams threatened by the violation of their rights and the theft of their genius. Free enterprise depends on the ability of risk-taking citizens to pursue their ambitions and reap the rewards of their sacrifice. When the product of their labor is stolen; when the sweat of their brow is made futile; it undermines our entire system of free enterprise.”

“The international community must never forget that its engagement with Taiwan does not threaten the peace; it protects the peace on Taiwan and throughout the region. America will always believe that Taiwan’s embrace of democracy shows a better path for all the Chinese people.”

“Hong Kong is a living example of what can happen when China embraces Liberty. And yet, for the last few years, Beijing has increased its interventions in Hong Kong and engaged in actions to curtail the rights and liberties of its people—rights and liberties that were guaranteed through a binding international agreement. One country, two systems. But President Trump has been clear, as he said in his words, ‘The United States stands for liberty.’ We respect the sovereignty of nations, but America also expects Beijing to honor its commitments, and President Trump has repeatedly made it clear that it would be much harder for us to make a trade deal if the authorities resort to the use of violence against protestors in Hong Kong. Since then, I’m pleased to observe that Hong Kong authorities have withdrawn the extradition bill that sparked the protests in the first place and Beijing has shown some restraint. In the days ahead, I can assure you, the United States will continue to urge China to show restraint, honor its commitments, and respect the people of Hong Kong. To the millions in Hong Kong who have been peacefully protesting to protect your rights these past months, we stand with you. We are inspired by you, and we urge you to stay on the path on non-violent protest. But know that you have the prayers and admiration of millions of Americans.”

“Far too many American multinational corporations have kowtowed to the lure of China’s money and markets by muzzling not only criticism of the Chinese Communist Party, but even affirmative expressions of American values … A progressive corporate culture that willfully ignores the abuse of human rights is not progressive, it is regressive. When American corporations, professional sports, pro athletes embrace censorship it’s not just wrong, it’s un-American. American corporations should stand up for American values here, at home, and around the world.”

“America’s economy is growing by the day, and China’s economy is paying the price. The president’s strategy is correct, he’s fighting for the American people, for American jobs, and for American workers like no president has before. And I promise you, this administration will not stand down. That said, the president has also made it clear the United States does not seek confrontation with China, we seek a level playing field; open markets, fair trade, and a respect for our values. We are not seeking to contain China’s development. We want a constructive relationship with China’s leaders like we have enjoyed for generations with China’s people. And if China will step forward and seize this unique moment in history to start anew by ending the trade practices that have taken advantage of the American people for far too long, I know President Donald Trump is ready and willing to begin that new future.”

“The American people want better for the people of China, but in pursuit of that end we must take China as it is, not as we imagine or hope it might be someday. Now people sometimes ask whether the Trump administration seeks to decouple from China. The answer is a resounding no. The United States seeks engagement with China, and China’s engagement with the wider world, but engagement in a manner consistent with fairness, mutual respect, and the international rules of commerce.”

“President Xi, himself, I’m told, said in a once-secret speech shortly after his rise as party general secretary, that China must conscientiously prepare for all aspects of long-term cooperation and struggle between the two social systems. He also told his colleagues at that time not to underestimate the resilience of the West. And there was wisdom in those words. China should never underestimate the resilience of the freedom-loving people of America or the resolve of the President of the United States.”

“China should know that the United States’ values run deep; that our commitment to these values remains as strong as it was for our founding fathers, and that there will never be a day when the bright light of democracy and freedom goes out in America. America was born out of rebellion against repression and tyranny. Our nation was founded, settled, and pioneered by men and women of extraordinary valor, rugged determination, faith, fiery independence, and an iron will—and nothing’s changed much in the centuries that have passed. Americans believe that all men and women are created equal, and we’re endowed by our creator with certain unalienable rights—life, liberty, and the pursuit of happiness—and nothing will change these beliefs. They are who we are; they are who we will always be.” 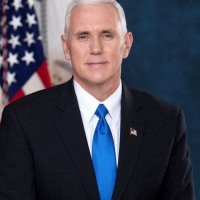 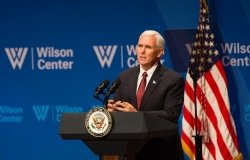