Water as a Tool for Resilience in Times of Crisis

About 90 percent of USAID’s water priority countries are conflict-affected or fragile. Please join the Environmental Change and Security Program, USAID’s Sustainable Water Partnership, and Winrock International for a discussion on where the challenges lie and what practitioners and policymakers can do to bolster effective water management for the world’s most vulnerable communities.

Water serves as a tool for resilience only when access to it is consistent and the system for making it consistent is in place, said David De Armey, Director of International Partnerships for Water for Good, an international NGO. He spoke at a recent Wilson Center event, “Water as a Tool for Resilience in Times of Crisis,” the second event in a three-part series, Water Security for a Resilient World, sponsored by the Wilson Center, Winrock International, the Sustainable Water Partnership, and USAID. Water for Good monitors 80 percent of wells across seven provinces in Central African Republic (CAR), he said. By keeping the water infrastructure working, the nonprofit creates a stable environment within an unstable country. “Thus,” he said, “we see reliability and services as a tool for resilience.” Because development work now takes place in more challenging settings, most of USAID’s investments for at least the last 10 years have gone into fragile and conflict-affected environments, said Cynthia Brady, former Senior Peacebuilding and Conflict Advisor at USAID’s Center for Resilience. The hard truth “is that we can’t just do traditional development in these environments,” she said. In a change that reflects USAID’s recognition of how water, conflict, and resilience are interrelated, the agency is on the verge of a massive reorganization, she said. USAID will bring the new Center of Conflict and Violence Prevention, the Resilience Center, and the new Water Center under an umbrella entity called R3, for relief recovery, and resilience.

Many still cling to the idea that we should all be moving in a linear direction, moving from conflict to peacebuilding to ultimately development, said Erika Weinthal, the Lee Hill Snowdon Professor of Environmental Policy at Duke University. But you can also go in reverse with development, she said. “You get de-development.” One such example is Syria. Before 2011, Syria was doing well, she said, as a highly urbanized society with potable water, potable sanitation, and infrastructure linked to water and energy systems. But with the war, much infrastructure was targeted and destroyed with disastrous results. Syria’s public water coverage dropped from about 98 percent in urban areas and 80 percent in rural areas in 2010, said Weinthal, to 30 percent of the population lacking access to safe water in 2015.   “In many ways, the targeting of infrastructure especially in urban settings has become a central feature of these post-2000 wars in the Middle East,” said Weinthal. And it’s affected how they do programming for water service provision. In many cases, the ideal situation is to have the state be the provider of a strong centralized water service system. But where states are destroyed and gutted, “the state is no longer the point where you would go for water,” she said. Instead, nongovernmental organizations are playing a larger role. “We’re essentially seeing a decentralization of water service provision as states are being destroyed,” she said.

When you’re dealing with water infrastructure in times of crisis, you may encounter tension between humanitarianism and development, said Weinthal. While we think about building resilience as the way to bridge that divide, we must be honest with ourselves “that there are some tensions between short-term objectives in these contexts and long-term objectives,” said Abigail Jones, Water and Sanitation Advisor at the Water Office in USAID’s Bureau for Economic Growth, Education and Environment. To ensure long-term objectives are baked into short-term responses to respond to fragility, Brady said it helped to see resilience not as “an end goal.” As USAID defines it, Brady said, resilience is a set of absorptive, adaptive, and transformative capacities that can exist within people, households, communities, and systems in different sectors. Even in the midst of a crisis, as one acknowledges that long-term goals may be far off, one can do something now or in the near term that reduces vulnerability and reduces humanitarian need, said Brady. Focusing on capacities would be more helpful than thinking of a permanently resilient water infrastructure, which might not last forever in today’s world, where infrastructure may be a target. “I think holding onto the notion of resilience and the idea of capacity is useful,” said Brady. Working in fragile contexts, said Basil Mahayni, Deputy Director of USAID’s Sustainable Water Partnership at Tetra Tech, can be like working at the intersection of relief and development. “To work at this nexus effectively we need to understand the risks and stakeholder dynamics,” he said. “And by clarifying these risks to ecosystems and communities, we can develop more informed mitigation efforts to respond to any potential shocks in the short-term and build adapted communities and systems that can deal with long-term stressors.”

Sometimes peacebuilding can foster resilience that helps communities better cope with climate stressors and extreme weather events, said Brady, citing the experience of a Mercy Corps program in East Africa that was highlighted in the animation, “Water, Conflict, and Peacebuilding,” created in partnership with USAID’s Office of Conflict Management and Mitigation. The project involved local peacebuilding interventions. When a major drought struck, much of the community suffered catastrophic livelihood losses and other decreases in well-being, said Brady, but the communities that had been investing in peacebuilding around natural resource management suffered much less.

In some fragile contexts, long-term services that foster resilience can be more helpful than short-term emergency assistance. Since its independence in 1960, the Central African Republic has never effectively established a state presence or developed infrastructure in many parts of the country, resulting in impoverished citizens, unprecedented conflict, and fragile state-operated water systems that depend on foreign assistance. The development that a country needs is far too often met with projects that are funded by emergency programs with many consequences, said De Armey. Quick exit strategies and the repetition of the idea that services are free are diametrically opposed to development and resilience, he said. By providing the maintenance and preventative maintenance systems of water, sanitation, and hygiene services in the CAR, Water for Good, which serves as a local water service provider, he said, is providing long-term services and partnerships with local communities, not “free” emergency-funded services. Some of the discussion centered on whether water is a better tool for resilience when it’s centrally housed within a government or decentralized through services provided by outside organizations. Whether a centralized or decentralized water service system is more likely to promote resilience depends, said Brady. You absolutely have to be willing to analyze your local context, she said, “and not presume that there are standard answers to whether it’s better to do it one way or the other way.”

Continue the conversation on Twitter by following @NewSecurityBeat using the hashtag #disasterresilience. You can also find related coverage on our blog at NewSecurityBeat.org. 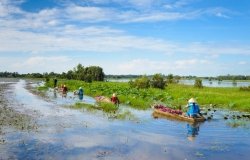 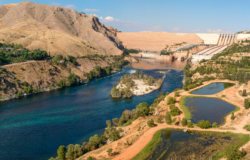