Women throughout the world are working towards viable democracies but not without challenges. NPR Journalist Jacki Lynden and Secretary General of the Jordanian National Commission for Women Asma Khader joined other women leaders from the Arab and Islamic regions to address these challenges and examine the influences of the Arab Spring on women.

Women leaders and grassroots activists from throughout the Arab and Islamic worlds addressed the challenges faced by women attempting to work towards viable democracies. On September 20, the Women’s Learning Partnership (WLP) and the Middle East Program of the Woodrow Wilson Center hosted two panel discussions with a group of women leaders to analyze the regional and international influences and ramifications of the Arab Spring on women.

Asma Khader, Secretary General of the Jordanian National Commission for Women, pointed to a troubling paradox in Jordan between the high number of university-educated women and the comparatively low percentage of women in the labor market. More active in the informal sectors of agriculture and domestic work, she noted that Jordanian women consist of merely 10.5 percent of the national Parliament. Furthermore, women in Jordan suffer from the weak economy and an unemployment rate double the national average. While Khader mentioned the achievements of the 2010 amendments to the country’s personal status code, she also pointed to Jordan’s nationality law as a major flaw in the system as mothers remain unable to pass their nationality to their children. Finally, Khader described the Arab Spring as causing citizens to realize their power to influence change and to demonstrate for greater rights.

Farida Naqash, Chairperson of the Forum for Women in Development and Editor- in-Chief of Egypt’s Al-Ahaly political newsletter, spoke on the situation of women in Egypt both during and after the recent uprisings. Naqash pointed out several examples of women actively mobilizing other Egyptians to join the protests in the hope that their rights would be improved with the overthrow of Mubarak’s regime. However, she described post-revolutionary policy-making as even more exclusionary of women. Additionally, she, like Khader, underscored the effect of political instability and a weakened economy on Egyptian women who make up the majority of the 40 percent of Egyptians living below the poverty line. She concluded by emphasizing the new-found interest in social justice among supporters of feminism and democratic movements in Egypt as indicative of a brighter future. Furthermore, she responded to the rising tide of political Islamism in Egypt by describing the strengthening movements for religious reform.

Rabéa Naciri, Founding Member of the Association Démocratique des Femmes du Maroc, discussed the effect of the Arab Spring on Morocco as creating a new sense of vigor driving the reforms that began before the outbreak of revolution in early 2011 in the region. The process of constitutional reform in Morocco, announced by the King, dealt with the relationship between legislation and religion. Naciri described the outcome of these reforms, as voted on by popular referendum, as advanced in some aspects but overall maintaining the status quo. 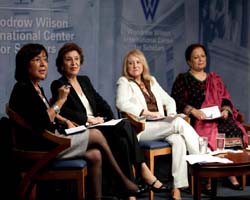 Yakin Erturk, former UN Special Rapporteur on Violence against Women, began by describing the Turkish experience as a potential model for the Arab nations in democratic transition. While the growing engagement of civil society with international human rights mechanisms in Turkey provides an example for Arab states, the unresolved Kurdish question as well as the lack of freedom of expression limits the exportation of this model. She discussed how this paradox is reflected in Turkish Prime Minister Erdogan’s reputation in the Arab world as inspirational yet neglectful of issues “at home.” Furthermore, Erturk described democracy as freedom and equality, not merely regime change. The ongoing struggle to remain focused on universal rights in addition to poverty and fundamentalism presents serious challenges to democracies in transition in the region.

Masuma Hasan, member of the Board of Governors and Treasurer of the Aurat Foundation, discussed Pakistan’s positive outlook on the Arab Spring and democratic transitions in the MENA region. Hasan expressed hesitation about Pakistan as a model for the region due to its unique dynamics. She continued to outline several achievements for democracy and women’s rights in Pakistan: a strong judiciary, free press, increasingly vibrant civil society and, significantly, the expression of all fundamental freedoms in the constitution. In spite of this progress, discrimination, particularly in rural areas, remains as a remnant of traditional Pakistani society. Pakistan’s democracy is challenged by destabilization and terror. She stated that “without peace, democracy cannot flourish.”

Mahnaz Afkhami began by pointing out the exclusion of women from the decision-making process after the Iranian revolution as well as those in the MENA region this year in spite of the crucial role they played in mobilizing and strategizing. Furthermore, she noted the weakness of civic structures, strength of religious networks, and diversity of protestors in Iran and the MENA region. She recommended that the protestors coordinate with civil society and religious organizations to clarify their demands. According to Afkhami, all parties involved must not negotiate with the government from an inferior position and work to ensure that women’s issues are discussed immediately. She concluded by underlining the importance of not viewing democracy merely in terms of procedures, but, rather, in terms of values and rights.

Pintaguy concluded the panel by emphasizing the need to distinguish between a revolutionary moment and a process of building a democracy. Given the model of Brazil, Pintaguy’s home country, and its female president, Dilma Rousseff, she further discussed the importance of including women in the democratic transition process.

Browse Insights & Analysis
Article
Democracy
Lula Finds Out that Latin America Is Not As He Left It
By The Brazilian Report on January 26, 2023