After a Year of War, Saudis and Houthis Explore Peace in Yemen 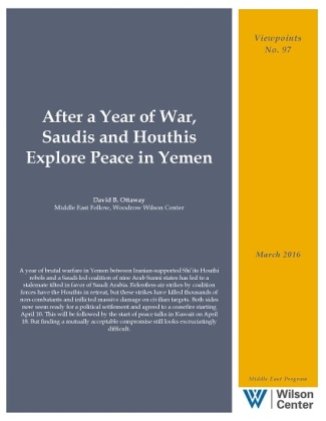 One year after a Saudi-led coalition began a military campaign to break the hold of Iranian-backed Houthi rebels over Yemen, the war appears to be winding its way toward excruciatingly difficult negotiations. For the first time, the Houthis have sent clear signals they are ready for a political settlement and the Saudis clearly are, too.

Negotiations are scheduled to begin April 18 in Kuwait under the mediation of UN Special Envoy Ismail Ould Cheikh Ahmed, who chaired a first round of abortive talks in Switzerland in December. Both sides have also agreed to a ceasefire on April 10.

The war has reached a stalemate right now in favor of the coalition, with the Houthis in retreat. But the destruction wrecked on Saudi Arabia’s poverty-stricken southern neighbor has been horrendous, and its coalition has taken an international battering for wide-scale indiscriminate bombing of civilian targets that has killed thousands.

The Obama administration has become embroiled by providing extensive material support to Saudi Arabia on its first major foreign military venture abroad. Most of Saudi war materiel is “made in America,” and the administration has been providing logistical, intelligence, and even targeting assistance. It has also approved the sale of over $1 billion in bombs and other munitions for the coalition’s air campaign. At the same time, it has been pressing Saudi Arabia to get to the negotiating table.

Canada and Britain are under intense public pressure to suspend their arms supplies to Saudi Arabia, while the European Union’s parliament has passed a non-binding resolution calling for an arms embargo of the kingdom. So far, the U.S. Congress has not pressed for similar steps, and an effort by Sen. Chris Murphy (D-CT) to initiate a debate on the U.S. role has still gained little traction.

Ironically, the Obama administration had been pushing Saudi Arabia and other Gulf Arab states to take responsibility for their own defense and stop relying on the United States. The Saudis believe they are doing just that: mounting their own coalition of nine Sunni Arab states who agree that Shi’ite Iran’s drive to expand its influence in the Sunni Arab world, mainly through proxies like the Shi’ite Houthis in Yemen, must be blocked. Just how far apart Obama is from this line of thinking was made clear in a series of interviews he gave to The Atlantic’s Jeffery Goldberg, where he urged Saudi Arabia to “share” the region with Iran.

The Yemeni war has morphed since its start last March 26 into a multi-sided turf struggle involving the Houthi rebels, forces loyal to two rival presidents, Islamic extremists, Sunni and Shi’ite tribes, and southern secessionists. Two of the biggest beneficiaries have been al-Qaeda in the Arabian Peninsula (AQAP), which now controls two provinces in the southeast, and the Islamic State, which has put down roots and is spreading. The country could easily end up re-divided into North and South Yemen as it was from 1967 to 1990, or fragmented into even smaller shards and safe havens for AQAP and the Islamic State.

The Saudi-led intervention in Yemen was triggered by the takeover early last year of most of the country by the Houthis and army units that had remained loyal to former President Ali Abdullah Saleh. First they chased the internationally recognized government of President Abd Rabbuh Mansour Hadi out of Sanaa, and then in a blitzkrieg campaign took over Aden, the country’s second largest city, and most of the south. In reaction, the Saudis cobbled together a coalition that first launched a bombing campaign and then a land invasion beginning last May. After a series of initial coalition victories, the war has largely settled into what its chief spokesman described as a “static” battlefield.

The Houthis still hold the capital, Sanaa, the Red Sea port of Hodeida, and most of the far north. But they have been driven out of much of the territory they had seized elsewhere as well as from Aden. This is where the rump Hadi government is now based. To help turn the tide of battle in the coalition’s favor, Saudi Arabia and the United Arab Emirates have trained thousands of Yemeni tribal recruits and even hired foreign mercenaries.

Signs the Houthis are hurting are multiplying. They have mostly stopped their missile and mortar attacks across the Saudi border. More importantly, they have signaled their readiness for peace negotiations by sending a large delegation to Saudi Arabia on March 7. The delegation was seeking to engage the Saudi government directly behind the back of the Hadi government under the pretext of a prisoner exchange.

The mere fact the Houthis sent their top negotiator, Mohammed Abdel Salam, is perhaps the strongest evidence they are suing for peace. There have been conflicting reports whether the two sides held talks on more than the prisoner exchange and a border truce during the Houthis’ three-day stay in Abha. But the visit seems to have opened the way as well for peace talks in Kuwait next month.

For their part, the Saudis have signaled they are giving up their quest for a clear military victory. The Saudi coalition spokesman announced on March 17 that the “major combat phase” of the war was coming to an end. “We don’t want Yemen to become another Libya,” Brig. Gen. Ahmed Asseri told the French news agency AFP. But he also made clear there would not be any withdrawal of coalition ground forces for some time, declaring Saudi Arabia wanted to avoid the U.S. mistake in Afghanistan and Iraq of a premature withdrawal before their governments were capable of assuring stability.

A year of warfare has seen over 6,000 people killed, 2.5 million people displaced, famine, collapse of social services, and the country brought to the “brink of catastrophe” as one UN relief official described it. The chief UN human rights official, Zeid Ra’ad al Hussein, on March 19 blamed coalition bombing for causing “twice as many civilian casualties as all other forces put together, virtually all as a result of air strikes.” He condemned as “carnage” the March 15 coalition airstrike on a market in the Houthi-controlled town of Mustaba that killed 106 civilians, the highest toll from any bombing during the conflict.

The Houthis and their allies have inflicted considerable damage by equally indiscriminate shelling of cities inside Yemen and with missile and artillery fire across the border into Saudi Arabia. Asseri, the coalition spokesman, disclosed in early February that 375 Saudi civilians, including 63 children, had died as a result of the Houthis firing 40,000 projectiles. Coalition military casualties have been kept a secret except for the United Arab Emirates, which has seen 72 of its soldiers killed, according to a UAE official.

The massive collateral damage inflicted across Yemen by the Saudi-led bombing campaign has been harshly condemned by international human rights and medical groups working on the ground there. In addition, a UN report leaked in late January documented airstrikes on hospitals, outdoor markets, factories, weddings, camps of war refugees, and entire residential areas. The report blamed the Saudi-led coalition for 60 percent of the 2,682 civilian deaths and injuries. The report referred in particular to 119 cases of “widespread and systematic” bombings that it said constituted “violations of international humanitarian law.”

The Saudis have systematically denied bombing of civilian targets and instead accused the Houthis of being responsible. But they have blocked all UN and other outside attempts to undertake an investigation of the allegations.

Peace negotiations will not be easy. Saudi Arabia has been seeking a capitulation of the Houthis to the terms of UN Security Council Resolution 2216 passed last April 14. It demands that the Houthis withdraw from all the territory they seized by force and the return of heavy weapons taken from the Yemeni army to President Hadi’s internationally recognized government.

Precisely what all the Houthis are seeking in a political settlement remains unclear but almost certainly includes a revision of a plan for a six-region federal state put forth in February 2014. The plan had left the Houthi heartland landlocked in the north with no access to the sea. For their part, the Saudis are determined to cut off the Houthis’ ties to Iran and prevent them from establishing a permanent independent militia similar to Hezbollah’s in Lebanon.

Probably the most delicate immediate issue is the fate of the Houthis’ main ally, former President Saleh, who ruled Yemen for 33 years before being ousted in 2012 as a result of an uprising. Saleh has so far rejected offers of a safe passage into exile either in Ethiopia, Morocco, or the United Arab Emirates, where his son now lives. As one U.S. diplomat noted, “it’s in Ali Saleh’s DNA to remain and die in Yemen.”

After a Year of War, Saudis and Houthis Explore Peace in Yemen