Is America Losing the Kurds? 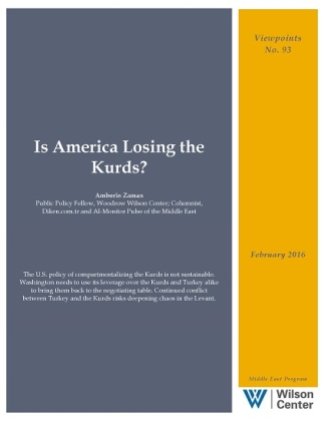 Amid the uncertainty shrouding the latest UN-brokered Syrian peace talks, one thing is already clear: Syria’s Kurds, who control a sizeable chunk of the country’s border with Turkey, are being excluded yet again, triggering feelings of betrayal and anger that could weaken the fight against the Islamic State (ISIS).

Many point the finger of blame at Turkey and its ruling Islamists who successfully blocked the Kurds from participating in previous rounds of talks.

But a growing number fault the United States for failing, as they see it, to use its heft to overrule the Turks and carry the Kurds to the table. “They [the Americans] can forget about Raqqa now,” a Syrian Kurdish official fumed over Skype. He was referring to U.S. plans to isolate and overrun the so-called capital of the Islamic State, with the help of the Kurds. Syrian Kurdish leaders warn that without their participation there can be no peace in Syria. Some are quietly threatening to throw themselves into Russia’s lap. This might explain why on January 30 Brett McGurk, President Obama’s Special Envoy for the Global Coalition to Counter ISIL (ISIS), traveled to Syria for the first time to placate Syrian Kurdish officials in the Kurdish-controlled town of Kobane.

Washington’s unabashedly cynical policy of feting the Syrian Kurds as partners while treating their counterparts in Turkey as outlaws was flawed from the start. It has poisoned relations with a critical ally, Turkey, while creating unrealistic expectations among Syria’s Kurds, which Russia is only too happy to exploit.

A group called the Democratic Union Party (PYD) that was denied a seat in Geneva leads the Syrian Kurds. The group operates as the political arm of the People’s Protection Units (YPG), the Kurdish militia that is America’s most effective partner on the ground against ISIS in Syria. Both groups fall under the umbrella of another Kurdish group, the Kurdistan Workers’ Party (PKK), and here’s where things get messy.

Since 1984, the PKK has been fighting the Turkish army intermittently for an independent Kurdish state carved out of Turkey, Iran, Iraq, and Syria. They now say they are happy to plump for self-rule inside Turkey, provided their rights are enshrined in a new democratic constitution. Turkey calls the PKK “terrorists.” And in a sop to its NATO ally, so does the United States.

Without question the group has resorted to terrorism to advance its cause, most recently in Istanbul when it lobbed a mortar at the city’s second largest airport, killing a woman worker. But it continues to command widespread support among Turkish and Syrian Kurds. Happily for the latter, the YPG and the PYD were never added to the U.S. State Department list of terrorist outfits.

To Ankara’s horror, Washington has milked this loophole to deepen its ties with the YPG. But the partnership, initially forged when the United States helped the Kurds break an ISIS siege over Kobane in 2014, remains strictly military. The Kurds hope that McGurk’s visit marks a shift, but nobody is holding their breath. In the meantime, the United States is helping with the transfer of Soviet-made weapons from former Eastern Bloc states, notably Albania and the Czech Republic, to the YPG. These are being delivered overland via Iraqi Kurdish territory. An estimated two dozen U.S. Special Forces have begun to train the Kurds and plot further operations against ISIS. Word is that the Americans have helped to refurbish a creaky airstrip near Rmeilan in northeast Syria that was used by agricultural aircraft before the conflict erupted in 2011. Backed by American airpower, the YPG has succeeded in wresting an area along the Turkish border that is three times the size of Lebanon.

Last summer Turkish President Recep Tayyip Erdogan ditched promising peace talks with Turkey’s own Kurds and re-ignited the war against the PKK, ending a two-year ceasefire. Erdogan’s desire to bolster his powers played a part. But fears shared by Turkey’s hawkish generals that the Syrian Kurds are on the cusp of a mini-statelet mimicking that formed by Kurds in Iraq was what drove the flip.

As Turkish Prime Minister Ahmet Davutoglu explained in a recent interview, the PYD and YPG had ignored Ankara’s calls to join the fight against its biggest bête noire, Syrian President Bashar al-Assad. What Davutoglu did not mention, however, is that ever since the Syrian Kurds declared self-rule over three separate enclaves in 2012, they have been reaching out to Ankara, saying they want good, neighborly ties. Turkey’s response has been to unleash its Syrian rebel proxies on them to keep the Kurds in check. Also left unsaid was that during two years of peace talks, his government took no real steps to address the Kurds’ demands for greater cultural and political freedom.

The security forces continue to lay siege to a string of Kurdish-majority towns and districts in the southeast, where the PKK’s youth wing remains dug in and thousands of residents are trapped. Hundreds of people, including nearly 200 civilians, have died. Corpses lie rotting in the streets, the wounded remain untended. Locals say the authorities will not let ambulances in to retrieve them, nor will they allow volunteer medics to treat them, Journalists are barred from covering the unfolding tragedy.

Yet, other than prodding the sides to return to the negotiating table, the United States has largely looked the other way. Washington seems to believe that in doing so, it can assuage Turkey over its dealings with the YPG. It has not. If anything, the closer the United States and the YPG grow, the harsher Turkey becomes towards its own Kurds. The result is that a once stable ally is growing less so by the day.

Syria’s Kurds are also torn by the plight of their brethren in Turkey. Washington’s perceived indifference is making their alliance harder to defend. The bulk of Syria’s Kurds are descended from the thousands who fled Turkish persecution in the early 20th century. The borders that separate them seem increasingly meaningless. Long before the Syrian uprising erupted, the country’s Kurds were flocking to join the PKK.

Maintaining the fiction that the YPG and the PKK are different is undermining the war against ISIS in Iraq as well. The PKK has offered to help retake Mosul, but the Iraqi Kurdish leader Massoud Barzani, who is allied with Turkey, will hear nothing of it.

Even so, U.S. duplicity worked seamlessly, at least for a while. Now the Syrian Kurds want more. Having joined the two cantons lying east of the Euphrates with American help, the YPG is eyeing Afrin, the Kurdish-run enclave that falls west of the river. In order to get there, it needs to punch through ISIS defenses and “moderate” rebel-held areas as well. It has made some tentative moves in that direction, wresting the strategic Tishreen Dam from ISIS and a village west of it. But fearing Turkish ire, America is, notionally at least, waving a red flag.

Syria’s Kurds are also pushing for formal recognition of their autonomy. They insist this would have been cemented with a seat at the Geneva talks, and that it was America’s to deliver. Geneva has sharpened Kurdish feelings that they have been used—and discarded—yet again.

The Kurds have no illusions about Russia either. They know that it is eager to exploit Turkey’s Kurdish paranoia to force it to abandon its support for the anti-Assad rebels. And after the downing on November 24 of their Sukhoi Su-24 by a Turkish F-16 fighter, punishing Turkey has become a national obsession. But never mind their motives; the Russians can deliver because, unlike the Americans, they are on the ground.

Unless Washington is resigned to letting Russia establish a permanent zone of influence along Turkey’s southern borders, and to watch Turkey gradually come unstuck, it needs to face up to the reality that the YPG is but one branch of the PKK tree.

Shelving this farce will allow America to push the PKK back to the negotiating table, albeit through YPG channels. But this can only work if it leans on Ankara as well. U.S. officials claim they have little sway over Erdogan. This is untrue. When the United States airdropped weapons to the YPG in Kobane, Turkey grew instantly cooperative, opening up a land corridor for Iraqi Kurdish peshmerga fighters to come in with their heavy weapons to help protect the town. When talk of a U.S. airbase in Iraqi Kurdistan resurfaced, Turkey opened Incirlik to anti-ISIS combat missions. The longer Turkey delays fixing its Kurdish problem, the bigger it will grow. It is time for Washington to recognize that Turkey’s relations with the Kurds are inextricably bound with its own national interests. It is time for Washington to have a Kurdish policy.