Skip to main content
Support
Explore More
Close
Blog post
Security and Defense
Israel’s Potential Annexation in West Bank: What Will the Kremlin Do?
By Daniel Rakov on May 21, 2020
Share on FacebookShare on TwitterShare via Email
Share
Part of the Security and the Rule of Law
Publication

Building Better Gendarmeries in Mexico and the Northern Triangle 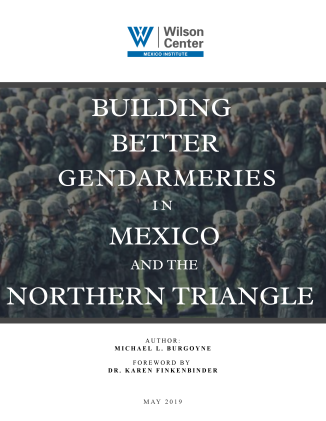 Facing record homicide rates and a public outcry to reduce violence and restore peace, Mexico’s President Andrés Manuel López Obrador proposed the formation of a “National Guard” as a possible solution. While controversial, it has garnered the support of large majorities in the Mexican Congress, and in two-thirds of the states, ensuring that the National Guard will be constitutionally recognized.

In a new report published by the Wilson Center’s Mexico Institute, author Michael L. Burgoyne, a U.S. Army Foreign Area Officer, looks at the limitations of current policing models in Mexico and Central America to confront “militarized criminal violence.” He further examines the historical experiences of Stability Police Forces in France, Spain, and Italy and draws some important lessons that could bolster efforts in Mexico and Central America to form their own versions of gendarmeries to better address the serious threats posed by organized crime. Finally, he highlights the limitations of current United States security cooperation programs for addressing these strategic challenges.