Changes in U.S. Policy on Africa in the New Administration: What will it mean for AFRICOM? 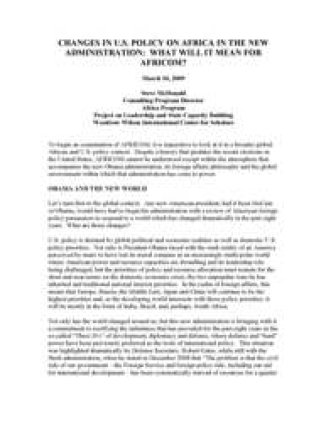 U.S. policy is dictated by global political and economic realities as well as domestic U.S. policy priorities. Not only is President Obama faced with the stark reality of an America perceived by many to have lost its moral compass in an increasingly multi-polar world where American power and resource capacities are dwindling and its leadership role being challenged, but the priorities of policy and resource allocation must remain for the short and near-terms on the domestic economic crisis, the two unpopular wars he has inherited and traditional national interest priorities. In the realm of foreign affairs, this means that Europe, Russia, the Middle East, Japan and China will continue to be the highest priorities and, as the developing world intersects with those policy priorities, it will be mostly in the form of India, Brazil, and, perhaps, South Africa.