Since the spring of 2013 when I wrote “The Gas Promise” for the first edition of this book, very little has changed fundamentally in the gas industry globally.  The tremendous opportunity for shale gas production continues to be an American affair.  North America remains awash with gas and prices remain low.

The full-blown shale revolution in North America is about a decade old.  Some of the bad behavior of adolescence is now showing on two fronts.  First, while cheap gas has been good for consumers it has caused bloodshed for investors.  Many of the firms that dominate shale gas production are financially weak—they borrowed heavily to expand market share yet are unable to remain solvent because prices for their product are low.  Continued innovation in production methods has allowed some cutting of costs, but at this writing (September 2015) the industry is on the cusp of a massive consolidation.  And because the decline rates in these gas fields are steep, within a few years it seems likely that supplies will align better with fundamental costs.

When that happens, gas prices are likely to rise—at least a bit.  Yet it is also clear that one of the trends I identified in the 2013 essay holds true today:  we analysts are still pretty bad at predicting prices.  Figure 1 updates the same figure from the 2013 essay and shows that gas price forecasting continues to be an activity that is like driving a car by looking through the rear vision mirror.  Forecasts begin at current prices and then unfold by assumption.  When current prices are low—as they were in the 1990s and have been since shale boomed 5 years ago—we assume that future prices will be higher.  When prices are high—as they were during the early 2000s—we assume they will decline.  But our actual track record of accuracy remains low. 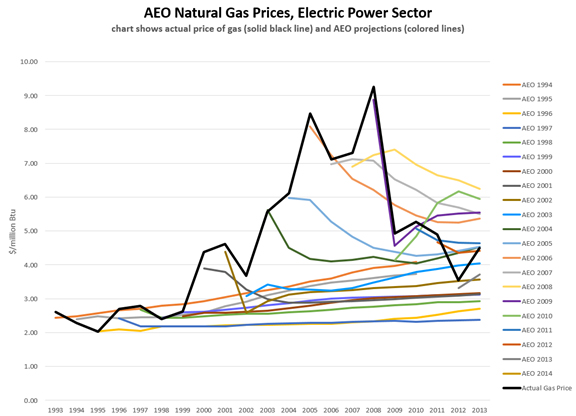 The second evidence of adolescence comes from the environment.  Within the industry the gas revolution is portrayed as an unalloyed boon for environmental quality.  Over my career I have been very sympathetic to that argument since gas is intrinsically cleaner burning than other fossil rivals.  Indeed, US emissions from the power sector continue to fall in large part due to the continued expansion of gas and contraction of coal.  (More renewables along with energy efficiency have also played substantial roles in cutting emissions.)  Figure 2, also an update from the 2013 essay, shows this pattern in emissions of carbon dioxide (CO2), the main cause of global warming and an intrinsic byproduct of burning carbon-based fossil fuels. 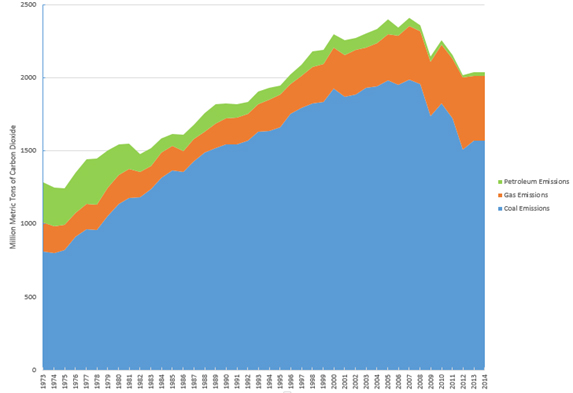 The industry and gas cheerleaders have a blind spot when it comes to environmental impacts—because the footprint of gas is more than just carbon.  Horizontal drilling and fracturing of shale rock causes seismic impacts—that’s why Oklahoma is now the quakiest state in the nation—and a growing number of residents are uneasy about letting humans shake the earth.  There are growing fears about the impact of shale production on the consumption of water, the contents of fracking fluids, and disposal of liquid wastes—although the industry has made huge progress on those fronts.

The most problematic issue environmentally is the suggesting evidence that natural gas production—perhaps especially shale gas operations—causes leaks of methane, a potent warming gas.  If enough methane leaks then much, if not all, of the warming advantage of using gas over coal could be erased.  This is not a new problem—in graduate school I wrote some of my first scientific papers on this same question when the worry of the day was leaking methane from the large Soviet Union natural gas export projects.  What’s new today is not just the possibility of new sources of leaks but also sophisticated methods for monitoring and measurement. And while the science is far from settled, it appears that in most circumstances the warming advantages of gas are robust.  More importantly, it appears that there is huge variation in industrial performance—most of the leaks come from a small number of operators that tend to hail from the financially weaker firms.  Consolidation of the shale gas industry should help weed out those bad actors.  Close attention to best practices will help as well.

The methane story has resonated with a larger and deeper worry about the future of gas.  Is the fuel a bridge to a low carbon future?  Maybe it is a dead end cul-de-sac, or a bridge to nowhere?  Answering these questions requires grappling with the need to find ways to use gas to make very deep cuts in emissions—80% if not more over the coming few decades.  Conventional gas-based power generation can’t do that.  Integrating gas with renewables is one promising route—so that the combination is reliable power generation along with much lower carbon footprints.  Decarbonizing gas itself—such as through the use of carbon capture and storage (CCS) combustion systems—might be viable as well.  Actual research and demonstration projects on the full range of options lag far behind what is needed, and until that exists the industry will grapple with questions of whether gas is merely convenient or a fundamental transformation into a very low carbon world.

Outside North America, the shale gas revolution is yet to take off.  In Europe, the politics and geology of shale gas continue to be difficult to manage.  China has made some headway, but shale operations remain a struggle thanks to regulatory and political systems that don’t yet encourage firms to produce much gas.  The challenges in India are even greater.  The green shoots of shale gas production are appearing in Argentina, but investors are wary of countries that have long histories of treating private enterprise poorly.  Perhaps most intriguing is Mexico—where the geology is known to harbor shale gas and reforms are creating new incentives to drill.

For all the attention to shale gas it is easy to forget that there remain massive gas resources in many other forms—including huge deposits of conventional gas.  Since 2013, one of the most striking changes in the gas industry globally is the realization that many of these supplies may be left in the ground.  When global gas prices were high, large remote stranded gas fields—such as in the Persian Gulf—were slated for export via liquefied natural gas (LNG) projects.  The prospect of LNG exports from the US has effectively put a ceiling on the viability of many other LNG projects from Latin America to the Arctic.

Comparing 2013 to 2015 it is clear that the gas revolution is very much under way, with the brightest spotlight on North America.  Whether anything will come along to impede that revolution—and cause another manic swing in the gas industry—remains to be seen.  The biggest challenge, it appears, will be the environmental impacts of gas, especially in a world where policy-makers get serious about deep cuts in emissions of warming pollutants.

David Victor is Professor of International Relations and Director, Laboratory on International Law and Regulation, School of Global Policy and Strategy, at the University of California, San Diego.  He is chairman of the Global Agenda Council on Governance and Sustainability, World Economic Forum.

Book
Energy
Energy and Security: Strategies for a World in Transition