Chronic Violence and its Reproduction: Perverse Trends in Social Relations, Citizenship, and Democracy in Latin America 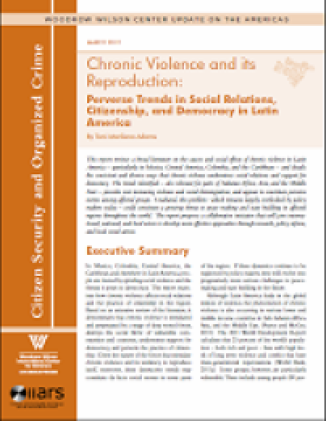 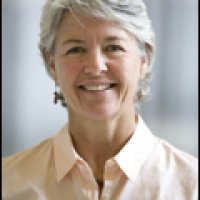 The Latin American Program is pleased to share with you a new report "Chronic Violence and its Reproduction: Perverse Trends in Social Relations, Citizenship, and Democracy in Latin America" by Tani Adams.  This report reviews a broad literature on the causes and social effects of chronic violence in Latin America – particularly in Mexico, Central America, Colombia, and the Caribbean – and details the consistent and diverse ways that chronic violence undermines social relations and support for democracy. The trends identified – also relevant for parts of Saharan Africa, Asia, and the Middle East – provoke ever increasing violence and social disintegration, and appear to constitute perverse norms among affected groups. Unabated, this problem –which remains largely overlooked by policy makers today – could constitute a growing threat to peace making and state building in affected regions throughout the world. The report proposes a collaborative initiative that will join international, national, and local actors to develop more effective approaches through research, policy reform, and local social action.

In Mexico, Colombia, Central America, the Caribbean, and elsewhere in Latin America, people are riveted by spiraling social violence and the threats it poses to democracy.  This report examines how chronic violence affects social relations and the practice of citizenship in the region. Based on an extensive review of the literature, it demonstrates that chronic violence is stimulated and perpetuated by a range of deep rooted forces, destroys the social fabric of vulnerable communities and countries, undermines support for democracy, and perverts the practice of citizenship.  Given the nature of the forces that stimulate chronic violence and its tendency to reproduce itself, moreover, these destructive trends may constitute de-facto social norms in some parts of the region.  If these dynamics continue to be neglected by policy makers, they will evolve into progressively more serious challenges to peacemaking and state building in the future.

Although Latin America leads in the global indices of violence, the phenomenon of chronic violence is also occurring in various lower and middle income countries in Sub-Saharan Africa, Asia, and the Middle East. (Pearce and McGee, 2011)  The 2011 World Development Report calculates that 25 percent of the world’s population – both rich and poor – lives with high levels of long term violence and conflict that have trans-generational repercussions. (World Bank, 2011a)  Some groups, however, are particularly vulnerable. These include young people (80 percent of whom live in developing countries), women, and certain ethnic groups.  (PRB, 2010) The problem also affects chronically marginalized groups in wealthier countries– for example, undocumented migrants and certain minorities in the US, Europe, and elsewhere.

This paper provides a schematic picture of the causes and social effects of chronic violence in Latin America based on a review of relevant literature; proposes some ideas to build a fresh conceptual framework with which to approach this phenomenon; and outlines recommendations for policy reform, research, and social action.  It is organized as follows:

Section I lays out the purpose of the working paper, the sources reviewed, and forwards definitions of five terms that are critical to understand this phenomenon:  “violence,” “chronic violence,” “social fear,” “grey zone,” and “illicit trade.”

Section II reviews the major factors that stimulate violence in the region.  These include various unintended consequences of globalization including especially the “new poverty” and the explosion of illicit trade, disjunctive democratization, the mass media, and the effects of extreme political traumatization.

Section III first provides a catalog of major social effects of violence, starting with the consequences of the “new poverty” and the breakdown of families, intergenerational relations, and traditional community structures.  Following, it provides summary descriptions of the major kinds of responses to chronic violence that emerge consistently in the literature reviewed.

Scapegoating and xenophobia produce dangerous “common sense” mechanisms that convert people into “victims” of dangerous “others,” while social silence and other avoidance mechanisms distort their capacity to clearly understand their realities and to act accordingly.  The state is progressively viewed as the enemy, and citizens construct diverse kinds of “parallel polities” that provide “state-like” protections, but further undermine state power and legitimacy.  Increased legitimacy of violence and illegality fuels toxic mixtures of complicity and guilt, social silence and amnesia, social isolation and aggression.  The result is further distortions of reality, more social isolation, reduced use of public spaces, and the flourishing both of “pentecostalized” religions and reactive social action.  In many countries, moreover, these trends are built on traumatic legacies of previous internal armed conflicts and state repression.

Finally, Section IV (a) forwards observations about the challenge posed by chronic violence to international and national policy makers and vulnerable populations and states, (b) presents four working propositions to contribute to a new framework for approaching this problem, and (c) outlines recommendations to enable policy makers, practitioners, scholars, and affected populations to address it in more integrated and strategic ways.