Democratization in Venezuela: Thoughts on a New Path 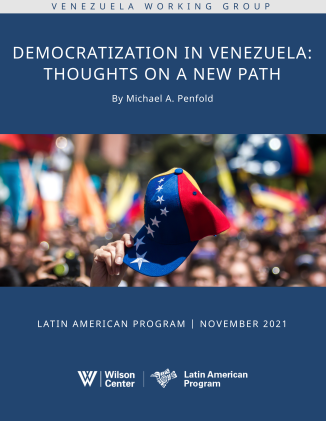 A new report from the Latin American Program’s Venezuela Working Group explores what has impeded democratic political change in Venezuela and explores options to enhance the chances for future democratization, civil harmony, and economic recovery.

Written by Lowenthal Public Policy Fellow Michael A. Penfold and signed by 21 Venezuelan, U.S., and European members of the Working Group, the report argues that Venezuela’s dire and destructive impasse cannot be resolved until both the Venezuelan government, led since 2013 by Nicolás Maduro, and the opposition interim government established in 2019 under Juan Guaidó, recognize that their strategies have failed to solve key practical problems faced daily by Venezuela’s impoverished population, and that each lacks enduring public support to chart a credible path forward.

The report notes that, with Norwegian mediation, a new round of dialogue between the Maduro government and the opposition began in Mexico City in August 2021. Despite initial promise, the Maduro government announced in mid-October that it would not attend the next scheduled round of talks in protest over the extradition to the United States of a close Maduro associate, accused of gross corruption and money laundering.

Notwithstanding the freezing of dialogue, the report lays out why a negotiated accord, reinforcing democratic norms and institutions and promoting cooperation across political divisions, is in the interest of those who have supported the chavista movement, those who have opposed it, and the rest of Venezuelans.