“Diverting the Arms Race into the Permitted Channels” 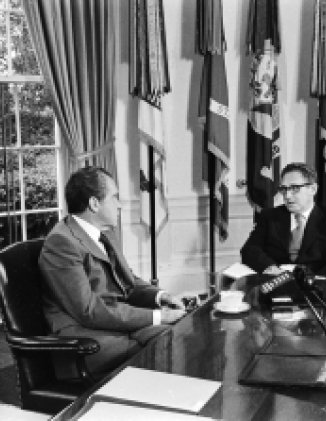 The Nixon Administration, the MIRV-Mistake, and the SALT Negotiations

Strategic arms control was a crucial element in US-Soviet relations. The five-year Interim Agreement of May 1972 (SALT I) was a milestone for détente. Its conclusion at the Moscow Summit in May 1972 underpinned US-Soviet efforts to downplay ideological differences, to search for common security interests, and to limit the size of their nuclear stockpiles. Yet, SALT I was also an imperfect nuclear arms control agreement that spurred the arms race and resulted in a sizable buildup of strategic weaponry. Drawing from a broad range of American sources, this paper depicts the flawed U.S-Soviet efforts to work for sustainable strategic arms control agreements. The paper illuminates Richard Nixon’s and Henry Kissinger’s thinking on nuclear affairs. It explains both their interest in the conclusion of a strategic arms control agreement as well as their ambition to continue the arms buildup. On the one hand, America lacked the financial resources for an escalation of the arms race with the Soviet Union due its costly global Cold War commitments and the Vietnam War. Meanwhile, Richard Nixon and Henry Kissinger gambled on technological advances through the deployment of hydra-headed Intercontinental Ballistic Missiles, the so-called MIRVs (Multiple Independently Targetable Reentry Vehicles) in an effort to restore America’s nuclear superiority. Yet, they miscalculated the speed of the Soviet Union’s own MIRV program. Thus, Nixon’s and Kissinger’s approach gave the USSR the chance to overtake the United States in the arms race. The MIRV mistake was self-defeating in that it made superpower relations prone to tensions. It endangered the kind of sustainability that Nixon and Kissinger needed to pursue détente over the long term. This paper probes into the bureaucratic battles between the supporters of a MIRV ban in the Department of State and its opponents in the White House and the Pentagon. It goes on to analyze Kissinger’s efforts to gain Soviet concessions on MIRVs during much of 1973 and 1974 through SALT II, when the first setbacks for US-Soviet détente emerged. Finally, the paper assesses the rise of domestic protest against détente in the United States against the background of squabbles within the Ford Administration that kept the President from seeking the ratification of the compromise solution on SALT II found at the Vladivostok Summit in November 1974.