Egypt’s Fight Against FGM: Is There Hope After All? 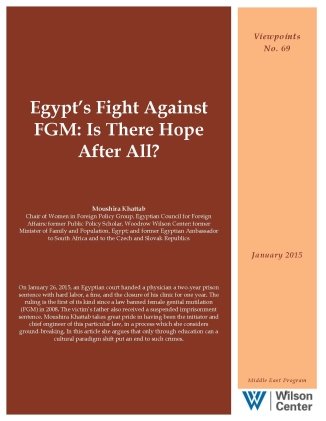 On January 26, 2015, an Egyptian court handed a physician a two-year prison sentence with hard labor, a fine, and the closure of his clinic for one year. The ruling is the first of its kind since a law banned female genital mutilation (FGM) in 2008. The victim’s father also received a suspended imprisonment sentence. Moushira Khattab takes great pride in having been the initiator and chief engineer of this particular law, in a process which she considers ground-breaking. In this article she argues that only through education can a cultural paradigm shift put an end to such crimes.

Former Public Policy Scholar;
Former Ambassador of Egypt to South Africa and to the Federal Republic of Czechoslovakia; and Former Egyptian Minister of Family and Population
Read More