Skip to main content
Support
Explore More
Close
Blog post
Security and Defense
Israel’s Potential Annexation in West Bank: What Will the Kremlin Do?
By Daniel Rakov on May 21, 2020
Share on FacebookShare on TwitterShare via Email
Share
Part of the Brazil Institute Event Summaries
Publication 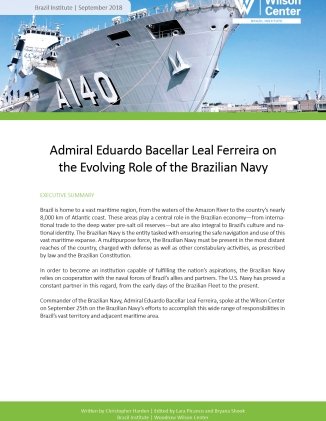 By Brazil Institute
Security and DefenseBrazil

Brazil is home to a vast maritime region, from the waters of the Amazon River to the country’s nearly 8,000 km of Atlantic coast. These areas play a central role in the Brazilian economy—from international trade to the deep water pre-salt oil reserves—but are also integral to Brazil’s culture and national identity. The Brazilian Navy is the entity tasked with ensuring the safe navigation and use of this vast maritime expanse. A multipurpose force, the Brazilian Navy must be present in the most distant reaches of the country, charged with defense as well as other constabulary activities, as prescribed by law and the Brazilian Constitution.

In order to become an institution capable of fulfilling the nation’s aspirations, the Brazilian Navy relies on cooperation with the naval forces of Brazil’s allies and partners. The U.S. Navy has proved a constant partner in this regard, from the early days of the Brazilian Fleet to the present.

Commander of the Brazilian Navy, Admiral Eduardo Bacellar Leal Ferreira, spoke at the Wilson Center on September 25th on the Brazilian Navy’s efforts to accomplish this wide range of responsibilities in Brazil’s vast territory and adjacent maritime area.