Event Summary: The Aftermath of President Bolsonaro’s Visit to Washington and Prospects for Economic Reform 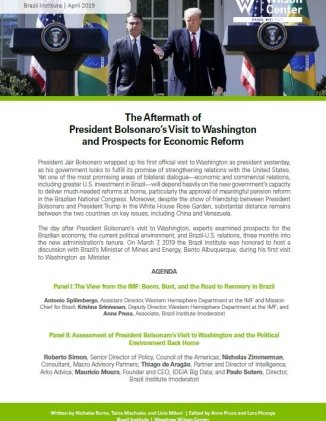 President Jair Bolsonaro wrapped up his first official visit to Washington as president yesterday, as his government looks to fulfill its promise of strengthening relations with the United States. Yet one of the most promising areas of bilateral dialogue—economic and commercial relations, including greater U.S. investment in Brazil—will depend heavily on the new government’s capacity to deliver much-needed reforms at home, particularly the approval of meaningful pension reform in the Brazilian National Congress. Moreover, despite the show of friendship between President Bolsonaro and President Trump in the White House Rose Garden, substantial distance remains between the two countries on key issues, including China and Venezuela.

The day after President Bolsonaro’s visit to Washington, experts examined prospects for the Brazilian economy, the current political environment, and Brazil-U.S. relations, three months into the new administration’s tenure.