Skip to main content
Support
Show
Live Now
Seeing the Forest and the Trees: Climate Ambition and Development in the Brazilian Amazon
Explore More
Close
Event
Energy
Powering Brazil: The Outlook for Brazil's Energy and Mining Sectors
On Thursday, March 7, 2019 at 9:00 – 10:45 ET
Share on FacebookShare on TwitterShare via Email
Share
Part of the Sustainable Development and Climate Change in Brazil
Publication 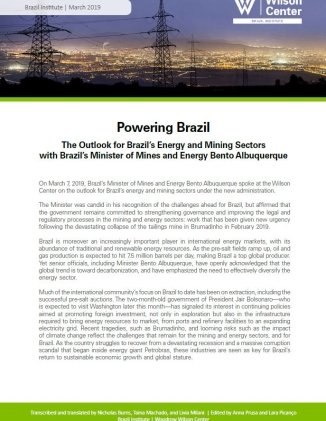 On March 7, 2019, Brazil’s Minister of Mines and Energy Bento Albuquerque spoke at the Wilson Center on the outlook for Brazil’s energy and mining sectors under the new administration.

The Minister was candid in his recognition of the challenges ahead for Brazil, but assured that the government remains committed to strengthening governance and improving the legal and regulatory processes in the mining and energy sectors: work that has been given new urgency following the devastating collapse of the tailings mine in Brumadinho in February 2019.

Minister Bento Albuquerque’s responses during the Q&A were, at times, remarkably straight for a high-level government official. He spoke of the need to diversify Brazil’s energy sector—including greater use of nuclear energy—to improve energy security. He noted that the global trend toward decarbonization will limit the long-term future of Brazil’s oil and gas sector; and climate change will limit the country’s ability to rely on hydropower, which currently accounts for more than 85 percent of Brazil's electricity matrix. The Minister also argued that development and environmentalism can and should coexist: “The Amazon is essential to our country… Its resources must be explored in a rational, sustainable way: in a way that does not hurt the environment.”

When questioned about mininglicensing and the Brumadinho disaster, the Minister defended existing legislation but condemned poor governance and a lack of oversight as causes of the tailings mine collapse in Brumadinho: “if the legal framework had been followed and the [regulatory] bodies had carried out their legal and administrative responsibilities, [Brumadinho] would not have occurred.” The Minister also argued that the current lengthy licensing process does little to safeguard local communities or the environment. “What exists is excessive bureaucracy….An investment in mining can take fifteen or twenty years to receive its installation license, and this does not guarantee there won’t be accidents later.” Instead, he argued in favor of a more efficient regulatory process characterized by greater interagency cooperation and more effective (and better-funded) oversight mechanisms.

The Minister also underscored the value of research and consultations, from scientists to legislators to other government ministries. He noted that in just two months, he has already received some 280 legislators in his office at the Ministry to discuss legislative proposals before formally introducing them to Congress; and he routinely consults with the Ministers of Environment, Infrastructure, and Regional Development. This collaborative approach is essential, Minister Bento Albuquerque said, in order to pass new laws in Congress and to secure buy-in from state governments and other stakeholders.

In closing, the Minister affirmed: “My message is, of course, a positive one. I believe that investments in Brazil will come.” He noted that Brazil has always honored its contracts, and the energy sector in general has a high level of predictability for investors. “Now, we do have to improve our governance, our regulatory bodies, so that investments may yield higher returns for Brazilian society and, principally, for those who invest in Brazil.”

To read the Minister's full remarks and a transcript of the Q&A session (in English), download the publication below. 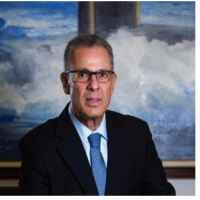