Extortionomics and Ideas to Leverage the Digital Revolution 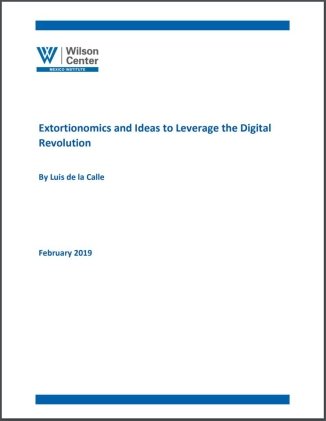 Mexico has been labeled and praised as one of the countries that “has done well” because it implemented several reforms—some of which were both profound and transforming—in topics such as macroeconomic stability, antitrust, and energy, among others. In certain cases, the country implemented only gradual reforms and stakeholders opposed to the changes have not been affected. In spite of this, the effort did not translate into faster growth rates. The great unfinished business that would help Mexico grow sustainably and aspire to full development, is clearly the need to establish a true rule of law based on the respect for property, not only in terms of private property rights, but also concerning the ownership of the fruit of one’s own work, intellectual creations, and public and communal property.

Violations to these rights come mainly from the extended economy of extortion that has become a sort of prohibitive tax, particularly for small- and medium-sized enterprises. Extortion is often not included in the explanation of why the country is at a relative economic standstill, in spite of it being an extremely common occurrence. The costs of extortion are high not only because of the impact resulting from not having made an investment, but because of the negative dynamic effects they generate.

Mexico, as the rest of the world, is subject to changes resulting from the fourth industrial revolution, which is now digital. These technological advances open the way to new market participants, facilitate the inclusion of great corporations and, potentially, they can also markedly increase the participation of small- and medium-sized companies.

In this document, we will first define what constitutes extortion and what its presence in society means in terms of the cost to economic development and in relation to the ecosystem of impunity it contributes to. Afterwards, we will describe several proposals for facing the challenge presented by the fact that, in order to grow, we must be able to reduce the size of the economy of extortion. We will also discuss the role of the digital revolution on the road to establishing the rule of law.