Eyewitness to the 1956 Hungarian Revolution 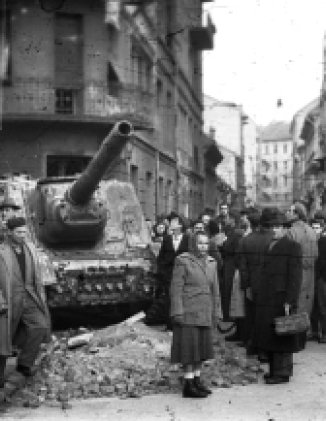 Soviet Suppression of the 1956 Hungarian Revolution: An Eyewitness Report by a Radio Free Europe Journalist

Newly released documents tell the story of Radio Free Europe journalists who entered Hungary at the beginning of the 1956 Hungarian Revolution. Three of these RFE journalists were detained for over a week by the Soviet military before the US Department of State intervened to ask for their release.

Radio Free Europe (RFE)’s broadcasts during the Hungarian Revolution have been the subject of much research and discussion since 1956. Some authors have focused on whether RFE fomented revolution and urged Hungarians to wage a hopeless fight against the Soviet Army (it did not), while others focused on whether Hungarian listeners concluded from the tone of some RFE commentaries and the very existence of RFE Hungarian broadcasts that Western powers would intervene on their behalf (many did).[1] Previously declassified CIA and State Department documents available in the Wilson Center Digital Archive and the RFE/RL Corporate Records in the Hoover Institution Library and Archives provide archival evidence on these issues. The complete RFE transmitter log recordings from that period, recovered from the Federal German Archives in Koblenz and posted this month with full transcription on the web site of the Hungarian National Szechenyi Library, are the authoritative source for RFE broadcasts in Hungarian and other languages during the critical weeks of October and November 1956.[2] They are the only source for newscasts – the most listened to programs – during that period. They contain reports from RFE journalists around the world on international solidarity with Hungary and humanitarian support for the Revolution.

With the outbreak of the Hungarian Revolution on October 23, 1956, RFE expanded its information-gathering operations in Austria. William Rademaekers (Hungarian-speaking assistant to policy advisor William E. Griffith, and later Time Magazine reporter) was dispatched from Munich to organize monitoring of the low-power “freedom radios” around Hungary that provided uncensored reporting of local events. RFE Hungarian broadcasts incorporated and thus amplified the content of this emerging independent media.[3]

Working from rooms in the Red Star (Royale) Hotel in Győr, they witnessed the Soviet occupation on November 4 and were then confined to the hotel by the Soviet military for a week.

After other Western journalists in Austria began to enter Hungary, RFE journalists lobbied to join them. On October 31, fourteen journalists received permission from RFE management to travel into western Hungary (but not Budapest). [See RFE Encrypted Telexes MUN 70, MUN 157, MUN135] Rademaekers led one team to Sopron. A second team went to Szentgotthárd. A third team for the Győr area was led by Frederick "Fritz" Hier, an American who headed the RFE refugee interview office in Salzburg and had been transferred to Vienna. Hier entered Hungary on October 31 along with RFE journalists Gabor Tormay from the Hungarian Service, Jerzy Ponikiewicz from the Polish Service, and a journalist from South German Radio, who helped tape RFE interviews in return for transportation.  They reported the  Revolution from Győr and nearby cities and interviewed heads of local revolutionary councils. Commuting from Austria, they encountered Soviet military check points on November 2 and could not return. Working from rooms in the Red Star (Royale) Hotel in Győr, they witnessed the Soviet occupation on November 4 and were then confined to the hotel by the Soviet military for a week.

The Free Europe Committee (RFE’s parent organization) and Hier’s Congressman Sterling Cole (R, NY) turned to the State Department for assistance. Hoping to avoid publicity, the State Department instructed Ambassador Charles Bohlen to ask the Soviet Government to arrange for Hier’s immediate release, which Bohlen did in the form of a personal letter to Soviet Deputy Foreign Minister Gromyko on November 9 [See State Department Moscow telegrams No. 1129, and No. 1130; State Department outgoing telegram Nov. 8; and Vienna telegram 1270]. Summoned by an unnamed Major General to Soviet military headquarters in Győr on November 10, Hier signed a negotiated statement attesting that he “had not been held under arrest but merely detained in Győr under comfortable circumstances in a hotel and due to existing conditions in the area at the time.” With a Soviet exit permission in hand, Hier and his colleagues were allowed to drive back to Vienna via Sopron late on November 11.

Hoping to avoid publicity, the State Department instructed Ambassador Charles Bohlen to ask the Soviet Government to arrange for Hier’s immediate release, which Bohlen did in the form of a personal letter to Soviet Deputy Foreign Minister Gromyko on November 9

Hier kept a diary that records his arrival in Vienna on October 27, his frustration with the hands-off attitude of the American Embassy, the frantic atmosphere in Nikelsdorf on the Hungarian border, and his observations on the Revolution and interviews with new leaders from Győr, Tatabánya (only 35 miles from Budapest), Mosonmagyaróvár, and other cities. The diary also recounts the Soviet military occupation of Gyor, his interaction with the Soviet military, and the details of his confinement and release. He published dispatches and diary excerpts in his home town newspapers in late 1956.[4]The full text of his diary is now available.

It would be another thirty three years before RFE journalists could again visit the East European countries to which RFE broadcast.