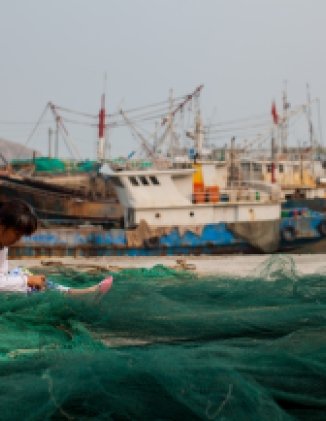 In December 2012, two Chinese fishing vessels were caught inside Argentina’s exclusive economic zone with multiple metric tons of presumably illegally obtained fish and squid aboard. This breach of international maritime law is not isolated; in recent years Chinese distant water fleets have been caught engaging in illegal fishing practices around East and Southeast Asia, and increasingly in more distant locations, such as South America. China has been the world’s largest producer of fish since 1990, and its high level of fisheries exploitation within its domestic waters has exceeded biological replacement rates leading to a serious decline in fishery resources and degradation of its coastal marine environment. Besides being the world’s largest fish processing and exporting country with around half its seafood production being exported to developed countries, China is also the largest consumer of seafood. With depleted domestic fisheries, the Chinese fishing industry (and the government agencies that support them) has looked into aquaculture and distant water fisheries to satisfy domestic and export demand.

Click and open the document below to read the full brief.