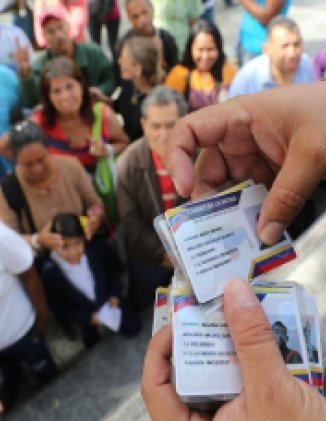 In spite of an all-encompassing economic and humanitarian crisis, Venezuela’s President Nicolás Maduro is likely to emerge victorious in the upcoming May 2018 presidential elections, consolidating a fully authoritarian regime.  Maduro has dismantled any vestige of the rule of law: he has incarcerated opposition leaders, banned political parties, stripped the popularly-elected National Assembly of its powers, and coerced voters.  In addition, the Maduro regime has now put in place a powerful and effective mechanism for securing favorable electoral outcomes: the manipulation of hunger as a means to condition voting preferences.

In a new study for the Wilson Center, Latin American Program Global Fellow Michael Penfold analyzes in detail the positioning of polling stations next to booths where people have to renew their chip-embedded “Fatherland Card” (Carnet de la Patria), used by the government to allot subsidized bags of food. This electronic card is linked in real time to big data related to an individual’s access to social security, public housing, public employment, health services, and direct cash transfers. It therefore has tremendous value for those dependent on these state benefits.  Penfold also examines the likelihood that this new electoral and authoritarian technology will hinder future opposition victories.