For Turkey which is the Lesser Evil: ISIS or the Kurds? 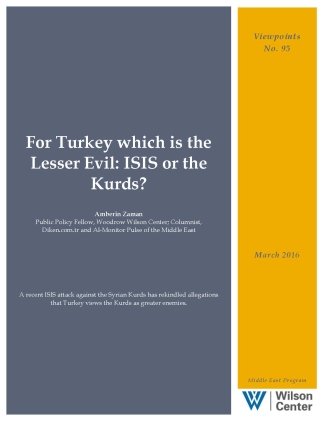 In October 2014 Islamic State (ISIS) militants encircled the now iconic Syrian Kurdish town of Kobani. Turkish troops across the border passively looked on. As the noose tightened, Turkey’s president, Recep Tayyip Erdogan, declared, “Kobani is about to fall.” U.S. airstrikes changed the course of the battle, the Kurds fought valiantly, and Kobani was saved.

On February 28, 2016 Erdogan announced ISIS had “recaptured 70 percent” of another Syrian Kurdish controlled border town, Tel Abyad. He was referring to a multi-pronged attack launched the previous night on Tal Abyad and 20 odd villages surrounding it. Once again U.S.-led Coalition planes flew to the rescue. At least 140 ISIS fighters were said to have died in a dozen Coalition airstrikes. The ISIS attack was decisively repelled. “A total massacre, very pleased,” confided a senior Western official.

Many Kurds would argue that Erdogan and his ruling Justice and Development Party (AKP) do not share the above Western official’s feelings—quite the contrary. The Syrian Kurdish militia known as the People’s Protection Units (YPG), who are globally acknowledged as the jihadists’ fiercest adversaries on the ground, insist many of the ISIS assailants came through Turkey and that Turkish troops had shelled YPG positions from across the border to help clear their path. The YPG also asserts some Turks had joined the “party”; YPG officials tout passports stamped with Turkish visas and paraphernalia emblazoned with the Turkish star and crescent they say they retrieved from the sea of jihadist corpses to bolster their claims. Unsurprisingly Turkey denounces these as lies. And Western officials say they have “no information” about Turkish collusion in Tel Abyad. But it hardly matters. The allegations that Turkey is supporting ISIS against the Kurds won’t go away.

These claims ought to sound counterintuitive. Turkey is a formal member of the U.S.-led “Global Coalition” against ISIS. In July Turkey opened the Incirlik airbase to U.S.-led combat missions against the group. It has ramped up cooperation with its European partners to snatch jihadists headed in and out of Syria. ISIS safe houses in Turkey are being steadily shuttered, their occupants jailed. Turkish air force jets have pounded ISIS targets, if only once. Turkish troops sporadically shell ISIS positions across the border. The jihadists have struck back, most recently in Sultanahmet, a prime tourist destination in Istanbul.

Yet none of this has sufficed to extinguish the Kurds’ long running accusations that Turkey is soft on the jihadists. Selahattin Demirtas, the co-chair of Turkey’s largest pro-Kurdish bloc, the Peoples’ Democracy Party (HDP), went as far to assert that the AKP is “ISIS’s political extension.” And while Western officials credit Turkey for stepping up pressure on ISIS, they agree that it could be doing a lot more.

There are several reasons for this. Most critically Turkey remains the main transit route for foreign fighters travelling to and from ISIS-istan. The flow is assured by the 98 kilometer-long stretch of the Turkish Syrian border that ISIS controls. The territory, which is commonly referred to as the “Manbij pocket” or the “Marea line,” allows continued access from Turkey to Raqqa. Western security officials believe that the perpetrators of the Paris bombing used this route.

Turkey keeps promising to assemble a force of “moderate” Syrian rebels to eject ISIS from Manbij, yet there is no evidence that it has. And even if such a force were to materialize, given its open hostility towards Turkey and the anti-Assad rebels, Russia would almost certainly pulverize it.

The YPG, which is mentored by the United States and Russia alike, says it can push ISIS out of Manbij, and few doubt that it can. But Washington has urged the Syrian Kurds to hold off because this would further antagonize the Turks who are enraged by the US’ deepening alliance with the YPG. Eager to keep Washington happy, the Kurds have played along.

But in early February, and allegedly with Russian backing, the YPG and its Sunni Arab allies in the Syria Democratic Forces (SDF) began punching their way from the Kurdish-controlled enclave of Afrin towards ISIS frontlines to the east. Turkey accused the YPG of trying for a land grab and began shelling their positions from across the border. At the same time Ankara helped to redeploy hundreds of its rebel proxies from Idlib to Azaz saying the Syrian border, which is the sole supply line for opposition forces in Aleppo, was under imminent YPG attack.

The YPG makes no secret of its desire to cement self-rule in northern Syria and has made spectacular progress so far. The conquest of Tel Abyad last summer with U.S. help allowed the YPG to join up the Kurdish run cantons of Jazeera and Kobani. It wants to add on Afrin, but ISIS remains wedged between.

Turkey deems Syrian Kurdish ambitions a threat to its national security because of the YPG’s intimate links with the Kurdistan Workers’ Party (PKK). The group has been battling for self-rule inside Turkey since 1984. Unlike its Syrian franchise, it is formally labeled “terrorist” by the European Union and the United States. The PKK’s main targets are the security forces but it murders civilians, including Western tourists, as well.

Fears of a PKK-led Kurdish entity are so deeply engrained that the AKP may feel more comfortable co-habiting with ISIS than with the people best equipped to beat them.

It is widely believed that worries about the emergence of a Kurdish statelet in Syria largely prompted the latest round of peace talks between the government and the PKK. When the PKK refused to exert pressure on the YPG to join the anti-Assad rebels and renounce its autonomy plans, Turkey ended a two year long mutually observed ceasefire in August and began bombing PKK targets in northern Iraq. At the same time it turned its guns on the PKK’s youth wing. The armed teenagers  recklessly declared “autonomy” in a string of towns and neighborhoods in Turkey’s mainly Kurdish southeast region, placing civilians in the direct line of fire.

The ensuing violence has reduced entire neighborhoods to rubble, displaced tens of thousands of people and cost hundreds of lives on both sides. Popular anger is being leveled as much at the rebels as the Turkish state. The carnage is spilling over to the rest of the country. On February 17 a suicide bomber blew himself up in Ankara together with 28 other people, most of them army personnel. The government blamed the YPG for the attack. But another PKK affiliate, the Kurdistan Freedom Falcons (TAK), claimed responsibility. They said that the attack was to avenge Turkish military operations in the southeast.

Turkey’s Human Rights Foundation (TIHV) says that anecdotal evidence suggests that at least 224 civilians died between August 16, 2015, when the security forces began effectively laying siege to the contested areas, and February 5, 2016. That was when the TIHV stopped counting because most of the residents who provided the information had fled.

The HDP charges that the security forces are responsible for the bulk of civilian deaths and accuses them of horrific abuses. These include allowing over 150 people trapped in basements in the town of Cizre to burn to death. Some of the corpses were allegedly decapitated. TİHV has called for an independent judicial investigation.

The HDP claims that some members of the security forces feel sympathy for the jihadists if only because they are battling the PKK and the YPG. Photographs of nationalist and religious slogans said to have been spray painted by security personnel in the southeast are circulating widely on social media websites.

I spoke to TIHV’s Sebnem Korur Fincanci, a respected forensic doctor who is investigating the allegations on March 3 as she was returning from a field trip to Cizre. This is what she told me: “We found the carbonized remains of humans in the first basement where 35 people were said to have sought shelter. There were small pieces of bones, including a child’s lower jaw. The child was probably between eight to 12 years old. The basement reeked of burnt flesh. The victims  most probably died as a result of tank fire. We found a tank shell lodged in the window casing. On the way to Cizre we were held up at checkpoints several times. The men in police uniforms wore Islamic-style beards. Their body language, how should I say, was kind of like ISIS.”

All of these narratives of violence and counter-violence are widening the psychological gap between the Turks and the Kurds.