Skip to main content
Support
Explore More
Close
Event
Conflict Resolution and Peacebuilding
Turmoil in Nicaragua: Is There an End in Sight?
On October 23, 2018 at 9:00 – 11:00
Share on FacebookShare on TwitterShare via Email
Share
Part of the Rule of Law
Publication

How To Understand the Nicaraguan Crisis 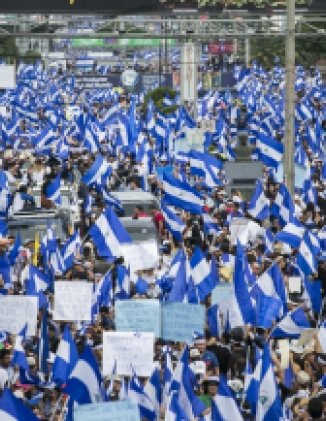 How to Understand the Nicar... by on Scribd

The shocking killings of student and other protestors in Nicaragua earlier this year galvanized many Nicaraguans and drew renewed international attention to a country once considered one of the most stable in Central America. What caused this once-peaceful country to erupt in April 2018?

In this bulletin, Arturo Cruz, professor at the INCAE Business School and former Nicaraguan ambassador to the United States and Canada, traces the evolution of President Daniel Ortega’s authoritarian governing model from 2008 until today. He explains why Venezuelan aid to Nicaragua initially allowed Ortega to distribute generous benefits and how the decline in aid ultimately ushered in the current crisis.

Professor of Business at INCAE Business School in Costa Rica and Nicaragua; former Nicaraguan ambassador to the United States and Canada
Read More