Skip to main content
Support
Explore More
Close
Article
Governance
Advancing Canada’s Interests in the USA: a practitioner’s take on how Allan Gotlieb changed advocacy forever
By Roy Norton on May 27, 2020
Share on FacebookShare on TwitterShare via Email
Share
Part of the Viewpoints Series
Publication

Iraq's Victory in Kirkuk a Harbinger of More Conflict 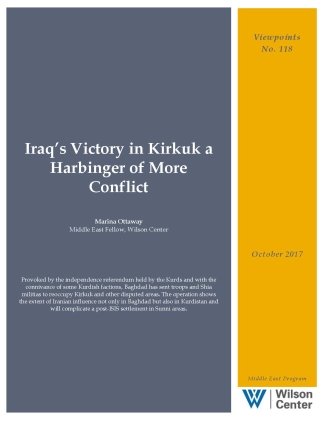 After the September 25 referendum in which over 92 percent of participants voted in favor of Kurdistan’s independence, Baghdad moved swiftly to reassert control over the contested areas its troops had abandoned in the face of the ISIS onslaught in July 2014—areas which the Kurds had subsequently occupied.

The city of Kirkuk and surrounding oil fields are back in the hands of the Iraqi government. So is Sinjar, the Yezidi town northwest of Kirkuk that was controlled by an uneasy mixture of pesh merga forces and Syrian and Turkish Kurds, the latter belonging to the Kurdistan Worker’s Party (PKK), which both Turkey and the United States have designated a terrorist organization. It is likely that the Iraqi government will soon be in control of all the disputed territories that were occupied by the Kurds in 2014. The pre-ISIS territorial status quo is being restored in this area as it is everywhere else. So far, there has been no indication that Baghdad intends to go further and occupy the constitutionally recognized Kurdistan region. Instead, the Iraqi government appears determined to isolate and starve the region into submission by closing its border crossings with Turkey and Iran and stopping all flights except those coming from Baghdad.

Baghdad’s rapid success is based on politics rather than military strength because there has been little fighting. The pesh merga units guarding Kirkuk, controlled by the Patriotic Union of Kurdistan (PUK), were ordered to abandon their positions without fighting the advancing Iraqi troops and Shia militia units. The Iraqi Kurds were mostly defeated by their own political division—a recurring theme in the history of that troubled region. The rivalry of the dominant Kurdistan Democratic Party (KDP) and its off-on ally PUK is rooted in geographic, tribal affiliations and the conflicting personal ambitions of leaders. The two organizations fought against each other in the days of Saddam Hussein and their collaboration since the U.S. occupation has been uneasy at best. Complicating the matter, a fight for control is unfolding within the leadership of the PUK. Jalal Talabani, the PUK founder and the first post-Saddam president of Iraq until incapacitated by a stroke in 2012, died on October 3 and the succession is bitterly contested, as shown by a statement issued by Hero Talabani, Jalal’s widow and one of the contenders, declaring that neither she nor any other family member were behind the order to the PUK-aligned pesh merga not to fight. At a time when the Kurds are under the most intense pressure from Baghdad in decades, they are more divided than ever—there are many more splinters than this brief account can outline.

Equally important to Baghdad’s swift victory is an international alignment solidly hostile to the Kurds. The United States and its allies in the anti-ISIS coalition opposed the referendum, warning of dire consequences; and while they are all now declaring neutrality in the conflict and preaching moderation, there is a “we told you so” undertone to the reaction. Iran and Turkey are backing Iraq unconditionally because they fear that any move toward independence by the Iraqi Kurds will encourage separatist demands in their own countries. Turkey’s support for Iraq is mostly verbal—Ankara has not stopped, so far, the flow of oil from Kurdistan to the Turkish port of Ceyhan—but Iran’s support is direct and concrete, revealing the extent to which Iran has infiltrated Iraq and is gaining influence in Kurdistan. The ties between the major Shia militias, supposedly integrated in the Iraqi military but in reality acting largely autonomously, are well documented. General Qassem Soleimani, the commander of the unit of the Iranian Revolutionary Guard Corps that controls foreign operations, moves openly in and out of Iraq; an Iraqi military spokesman recently explained that this is because the general is a military advisor to Baghdad. And General Soleimani was in Kurdistan the day before the Iraqi military moved on Kirkuk, purportedly to visit Jalal Talabani’s gravesite and pay his respects. It seems highly probable that he also held talks with some PUK leaders, which resulted in the order to the PUK pesh merga not to fight.

Baghdad’s response to the referendum has implications that go beyond Kurdistan. With the final defeat of the ISIS caliphate imminent in both Iraq and Syria, the two countries face the problem of how to re-establish effective government in the territories and regain support, or at least acceptance, among Sunnis who are not anxious to return to centralized control by a distant and Shia-controlled capital. The message sent by Baghdad is that decisions will be made by the central government, disregarding local and regional demands, and will be enforced by military action if necessary. In Syria, President Bashar al-Assad is certain to follow suit. With Iranian backing and Turkish acquiescence, they are likely to succeed in the short run, leaving the United States sidelined.

In the long run, both countries will see more conflict. Whatever the Kurds decide to do right now, they will not give up the fight for a state of their own—a fight that they have been waging in some form for generations. And a hardline policy at the center will do nothing to quell the grievances that led part of the Sunni population in Iraq to choose ISIS over Baghdad and many Syrians to turn against Damascus. Iraq’s victory in Kirkuk is unfortunately a harbinger of more conflict to come.