Is ISIS Going All Out on Turkey? 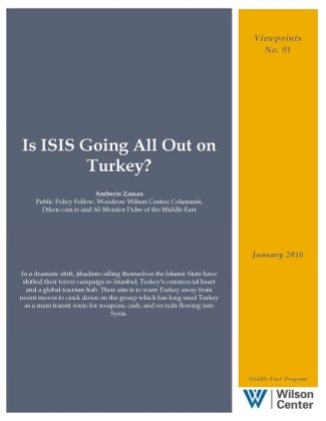 The deadly suicide bomb attack that struck Istanbul’s main tourist hub on Tuesday, January 12 is a stark warning to Turkey’s ruling Islamists about the blood-soaked mayhem and financial hardship the country is likely to face should it escalate its conflict against the Islamic State (ISIS). More broadly, it illustrates just how badly Turkey’s policy of backing rebels of all stripes and nationalities to overthrow Syrian President Bashar al-Assad on the one hand, and to stymie Kurdish aspirations on the other, is backfiring.

At least ten people, all of them German nationals, died when a suspected Saudi-born jihadist blew himself up near the historic Blue Mosque. The attack marks the first time that ISIS has gone after Turkey’s multi-billion dollar tourist industry, an easy and obvious target. Yet as with previous attacks, ISIS has yet to claim responsibility for the carnage, a further sign that this is likely more of a final admonition than the start of a nationwide campaign against Turkey.

Indeed, until Tuesday’s strike ISIS had largely focused its attacks on Kurdish nationalists and their Turkish sympathizers. This allowed ISIS to send the message that it has the resources to stage operations within Turkey, but without targeting Turks per se. All of this has fed claims that Turkey has been at best turning a blind eye, at worst actively supporting ISIS against their common enemies, the Kurds.

In recent months, caving to Western pressure Turkey has finally began to crack down on the jihadists in earnest, raiding their cells, arresting their members, and making it harder for them to slip in and out of Syria. Following Tuesday’s blast Ahmet Davutoglu, the Turkish prime minister, declared that Turkey would continue to pursue ISIS inside Turkey and along the border until they “ceased to be a threat to Turkey and the global community.”

Turkey is already steeped in a full-scale war against rebels of the outlawed Kurdistan Workers’ Party (PKK). Thousands of Turkish security forces backed by tanks and helicopter gunships have laid siege to a string of towns in the mainly Kurdish southeast region after a two-year ceasefire with the Kurdish rebels collapsed in August. Over 160 civilians, including scores of women and children, have died in the clashes that have displaced tens of thousands of people and reduced entire neighborhoods to rubble. Turkey’s Human Rights Association blames the security forces for most of the civilian deaths.

There are various theories as to why the government ditched its efforts to make peace with the PKK. One is that it is seeking to drain resources away from its Syrian franchise known as the People’s Defense Units (YPG).

The YPG is Washington’s top ally against ISIS in Syria. The bond was forged in 2014 when U.S. airstrikes rescued the Syrian Kurdish border town of Kobane from an imminent ISIS takeover. Washington’s decision to keep arming the YPG and to effectively clear the path for its further expansion westward along the Turkish border set off alarm bells in Ankara. In June, Turkey finally allowed the U.S.-led coalition to use the Incirlik Air Base to carry out combat missions against ISIS, mainly to thwart the U.S.-Kurdish alliance and to tip the balance in favor of Arab rebel protégés. The latter were supposed to clear a 98-kilometer-long strip of the Turkish-Syrian border known as the Marea Jarabulus line that remains under ISIS control.

But Turkey’s calculations proved hopelessly wrong, leaving it squashed between the Kurds, Russia, and ISIS. It has yet to come up with a credible rebel force to definitively boot out ISIS from its borders. And meanwhile Russia has stepped into the fray, saying it is there to combat ISIS but going after Assad’s Turkish-backed foes instead. Turkey’s downing of a Russian air force jet in November has only made things worse.

An apparently unappeasable Russia has set about punishing Turkey, slapping on a raft of economic sanctions. And it is actively helping the YPG to fulfill its dreams of linking the pair of enclaves under its control with a third enclave that lies west of the Euphrates. Turkey has repeatedly threatened to attack the YPG if it were to venture west of the Euphrates labeling this a “red line.” Yet the YPG did just that when it seized the critical Tishreen Dam from ISIS forces on December 26. And Turkey barely uttered a peep. There is little it can do without risking Russian retaliation.

Tuesday’s tragedy offers Turkey a further opportunity to scrap its anti-Kurdish stance and to join forces with them against ISIS. This would help to reignite the peace process at home, soothe relations with Washington, and show the world that Turkey really means it when it says that it is committed to helping the world defeat ISIS.

Is ISIS Going All Out on Turkey?