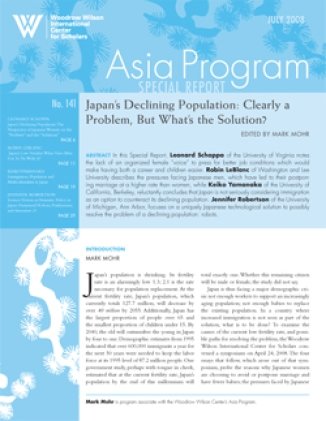 In this Special Report, Leonard Schoppa of the University of Virginia notes the lack of an organized female “voice” to press for better job conditions which would make having both a career and children easier. Robin LeBlanc of Washington and Lee University describes the pressures facing Japanese men, which have led to their postponing marriage at a higher rate than women, while Keiko Yamanaka of the University of California, Berkeley, reluctantly concludes that Japan is not seriously considering immigration as an option to counteract its declining population. Jennifer Robertson of the University of Michigan, Ann Arbor, focuses on a uniquely Japanese technological solution to possibly resolve the problem of a declining population: robots.