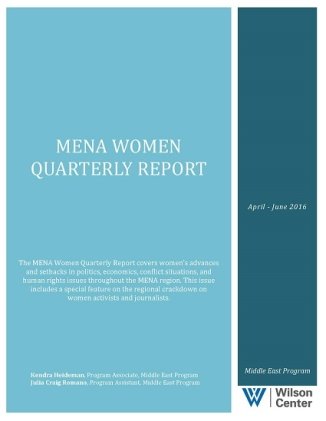 Feature: The Regional Crackdown on Women Activists and Journalists

One major trend from the last several months was the intensifying crackdown on women journalists and activists throughout the region. In Egypt, passport control officers prevented Mozn Hassan, the executive director of the organization Nazra for Feminist Studies, from boarding a plane to attend a women’s rights conference in Lebanon. The Egyptian government is investigating the organization for receiving “illegal foreign funding.” Hassan previously stated that Nazra for Feminist Studies would continue its work despite the investigation. Additionally, Egyptian security officials removed Liliane Daoud—a  journalist whose television program has criticized Egyptian President Abdel-Fattah al-Sisi’s government—from her home, arrested her, detained her, and then deported her to Lebanon, her home country. An anonymous security official stated, “she had crossed red lines in her TV program and will not be allowed to return to Egypt as punishment.”

Bahrain also made headlines for governmental actions affecting activists. In June, an article detailed that the Bahraini government cut financial support to several women’s rights groups, as well as other NGOs. A “senior source” of the Bahrain Women’s Union, an organization to which the defunded women’s groups belonged, suspected this was a political move in response to a report submitted to the UN critical of the Bahraini government. On a positive note, Bahrain released Zainab al-Khawaja, an activist and political dissident, on humanitarian grounds. Al-Khawaja has since fled to Denmark—she has dual Danish-Bahraini citizenship—after she was warned she would be arrested again. In an interview with the New York Times, she said “I have been arrested 11 times. I have done all I can do inside of prison.”

Throughout recent months, the Iranian government has also undertaken actions against women journalists, activists, and NGO professionals. One of the most famous cases is that of Nazanin Zaghari-Ratcliffe, an Iranian-British national who works for the Thomas Reuters Foundation. Zaghari-Ratcliffe was arrested in April 2016 and accused of “attempting to overthrow [Iran’s] leadership.”[1] Other cases of women activists and journalists targeted by the Iranian judiciary include Narges Mohammadi, who recently had 16 more years added to her 6-year sentence for her work in human rights, Afarin Chitsaz, a journalist who was beaten in Evin prison to extract a confession, and Atena Farghadani, who was released in May from Evin Prison, where she had been serving time for her cartoons depicting Iranian lawmakers as anthropomorphized animals.

There have been a number of articles in the past few months highlighting issues related to the sexual violence, assault, and trafficking of women throughout the MENA region. In Turkey, approximately 86 percent of women said they were “subjected to physical or psychological violence by their partners or family,” according to a study conducted by the country’s Ministry of Family and Social Policies. Nearly all of the women parliamentarians in Israel (28 of 32 female Knesset members) have experienced sexual assault or harassment. Moreover, there were reports of women being trafficked in Lebanon, Kuwait, and Bahrain. Many countries accused of human trafficking deny such claims.

During this time period, some news articles detailed how governments have been responsible for perpetrating violence against women, increasing restrictions on women’s rights, or perpetuating stereotypes about women. For example, questions remain about how the results of Tunisia’s Truth and Dignity Commission, which revealed that “thousands of Tunisian women suffered from systematic sexual violence at the hands of state agents,” will provide justice to these victims. Iran’s morality police have intensified their attention on women wearing “improper” hijab, while Iranian women have protested by posting photos on Instagram without wearing a hijab. Saudi women’s exclusion from driving remains a prevalent topic, and Mohammed bin Salman Al Saud, the deputy crown prince, recently said the “Saudi community is not convinced about women driving.” Turkish President Recep Tayyip Erdogan has commented about the need for Muslims to reject birth control and for women to have at least three children, which led to significant backlash from women’s rights activists and Islamic scholars.

Despite these examples of threats to women’s rights in the MENA region, there are also examples of efforts to address such issues. Turkey has the “Campus Witches” to support women university students “to stand up against male violence and sexual harassment.” The Takana Forum in Israel, which “addresses complaints against authority figures wielding power in the religious sector,” has taken on cases related to sexual harassment against women. And in the West Bank, the Ministry of Women’s Affairs has developed plans to create the National Observatory on Violence Against Women. Morocco has also made some recent legal advancements, including its amendment to the penal code “to allow abortion in cases of incest, rape, and birth defects.”

The April 29 runoff parliamentary elections in Iran led to the highest number of women MPs elected in the country since the 1979 revolution. Of the 290 people who would be sworn into the parliament, known as the Majles in Iran, 17 were women (6 percent). The number would have been 18, but, as noted in the last MENA Women Quarterly Report, the IRGC disqualified Minoo Khaleghi, who won her seat in February’s election due to “evidence” against her including photographs “showing her in public in Europe and in China without the obligatory Islamic head scarf.”

Women’s political participation in the Arab world is also increasing.  Tunisia’s parliament, which is ranked 2nd in the region and 40th globally for highest percentage of women MPs, recently passed a bill that moves the country closer to gender parity in politics. An amendment to Article 49, approved by 127 of 134 of Tunisia’s representatives, requires both horizontal and vertical parity to electoral lists. These changes will be applied to Tunisia’s March 2017 parliamentary elections. According to UN Women, Tunisia’s 73 women MPs formed a bloc to lobby for these changes. Amel Azzouz, a former secretary of state in charge of international cooperation in Tunisia’s foreign ministry, recently spoke out about the importance of quotas in ensuring gender equality in politics, saying “Being a feminist, initially I used to believe in women’s competence to prove that we are fit for this. But with time and practice, I discovered that unless women are given a chance, they would never come to the surface because of the socio-cultural and historical accumulations, which can be remedied only through quotas.” Additionally, the Women in Parliaments Global Forum recently recognized the work Algeria has done to improve women’s political participation.

Women in the Workforce

Businesswomen in the UAE are also being recognized for their influence and accomplishments; Raja Easa Al Gurg, the managing director of Easa Saleh Al Gurg Group, joined fellow Emirati Sheikha Lubna Al Qasimi on the Forbes’s 2016 “100 Most Powerful Women” list. Al Gurg was ranked 91 on the list and was recognized for being a business leader in Dubai and establishing “herself as an instrumental figure in the support and encouragement of Arab women entrepreneurs.” UAE women in the workforce also made news in recent months with reports that Emirati women’s salaries are two percent higher than their male counterparts, and that Emirati women now make up 21 percent of the nuclear sector, a striking figure considering women comprise 13 percent of the labor force.

Women’s workforce participation elsewhere in the GCC states was featured in articles from the last three months as well. The Saudi labor ministry announced that women will be allowed to work in four sectors previously unavailable to them: kitchens, family entertainment parks, accountancy, and shops selling “female items,” but jobs in fields such as mining, construction, and excavation are still prohibited for women for “safety” reasons. In an unrelated announcement, the Saudi Labor Minister, Mufarrej al-Haqbani, announced that he is “not satisfied at all” with the Saudi female employment rate. Additionally, Gulf News highlighted that Kuwait “leads” the GCC states for women’s labor participation.

Other countries had mixed news reports about women in the workforce. In Iran, the outgoing Majles passed a bill that would reduce women’s time in the workplace by six hours per week, yet an advisor to the Ministry of Cooperatives, Labor, and Social Welfare noted studies that project women will comprise 45 percent of the labor market  in ten years (they currently comprise less than 20 percent). In Israel, a new study found that generally men make more than women even though women are better educated, whereas Haaretz discussed Israeli Druze women’s struggle to find suitable employment. In Egypt, a new report detailed the high rates of women performing unpaid work for family businesses; France signed an agreement that would boost Egyptian women’s participation in French companies in Egypt; and an article by Daily News Egypt profiled key women in Egypt’s technology companies. In Turkey, women’s participation in the workforce increased by 60 percent in six years, but young women are still not encouraged to pursue careers in the sciences.

News about the treatment of women held in Iraq and Syria by ISIS has declined significantly in the past several months. There are fewer articles focused on this topic than in previous quarters, including an op-ed that underscores this point: “Why has the world forgotten Islamic State’s female sex slaves?” Despite the dearth of news, there have been some articles regarding women’s treatment under ISIS. For example, a mass grave in Palmyra with bodies of women and children was discovered in April. There were also some reports in June of ISIS burning women alive in Mosul for rejecting sexual slavery.

During this quarter, there has been more attention focused on stories about survivors of ISIS’s brutality. A number of articles detail the determination of women formerly held captive by the terrorist group to “bring ISIS to justice.” In June, Amal Clooney confirmed that she would represent victims of the Yazidi genocide, including Nobel Peace Prize nominee Nadia Murad who survived ISIS captivity. Following the U.S. declaration in March that ISIS’s crimes constitute genocide, one survivor from Syria said, “The ordeal the residents of my village went through cannot be limited to a statement or discourse. Tough measures need to be taken.” Another Syrian woman survivor protested by removing her veil and headscarf, while a Kurdish woman survivor vowed to wear only red to celebrate being free from ISIS.

Other articles from the past few months have also highlighted the positive stories of women refugees rebuilding their lives through entrepreneurial and artistic endeavors. One Syrian refugee described how she was able to create a small business in Amman despite numerous obstacles. Syrian refugee women at a camp on the Turkey-Syria border can participate in “Sew for Syria,” a charity project that provides training for women to learn how to sew and earn an income. In addition, Yazidi refugees in Kurdistan have the opportunity to develop their photography skills, which allowed one student to “document the plight of her people, thousands of whom have been massacred, enslaved and raped by Islamic State.”

[1] On July 11, the Iranian judiciary indicted Zaghari-Ratcliffe on undisclosed charges, along with three others, including Homa Hoodfar, an Iranian-Canadian academic based in Montreal. Hoodfar was arrested in March, released, and rearrested in June. 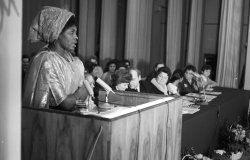