Skip to main content
Support
Explore More
Close
Publication
Security and Defense
Why are Homicides on the Rise Again in Mexico? What Can Be Done About It?
By Guadalupe Correa-Cabrera
Share on FacebookShare on TwitterShare via Email
Share
Share
Email
Part of the Security and the Rule of Law
Publication

Mexican Security Diagnosis and a Proposal to Eradicate Violence

Eleven years ago, Mexican President Felipe Calderón Hinojosa declared a “war against drugs,” a strategy that essentially consisted of full frontal assault on organized crime, as well as the implementation of an unconventional security strategy that incorporates the armed forces and the Federal Police in public security tasks outside of their area of competence. This strategy—that continues to this day—was implemented in response to the expansion of influence and firepower of transnational criminal organizations (referred to by many as "drug cartels").  As described by Joaquín Villalobos in his article titled “De los Zetas al Cártel de a Habana” (published in 2011 in Foreign Affairs Latinoamérica), the primary objective of the Mexican federal government’s strategy was to dismantle the powerful organized crime groups, and eliminate their main leaders to weaken and fragment the group in order to convert the organized crime group problem from a “national security” issue to a “public security” matter that would then require the active participation of the police force at various levels – local, state, and federal.

The idea was to keep the armed forces on the streets as a temporary measure while the police forces the country needed were built.  From this perspective, police reform was one of the top national priorities. Criminal organizations responded to the participation of the federal forces with enormous firepower, which raised the levels of violence and the number of homicides to unprecedented levels (see Graph 1). The strategy to dismantle the large regional Mexican drug cartels was applied with rigor but the results were not as expected. In effect, the main Mexican criminal organizations were fragmented into a large number of crime cells—which, unfortunately, continue to demonstrate great firepower, and have specialized in extracting rents through extortion, kidnapping, stealing gasoline, migrant trafficking, and other criminal activities. 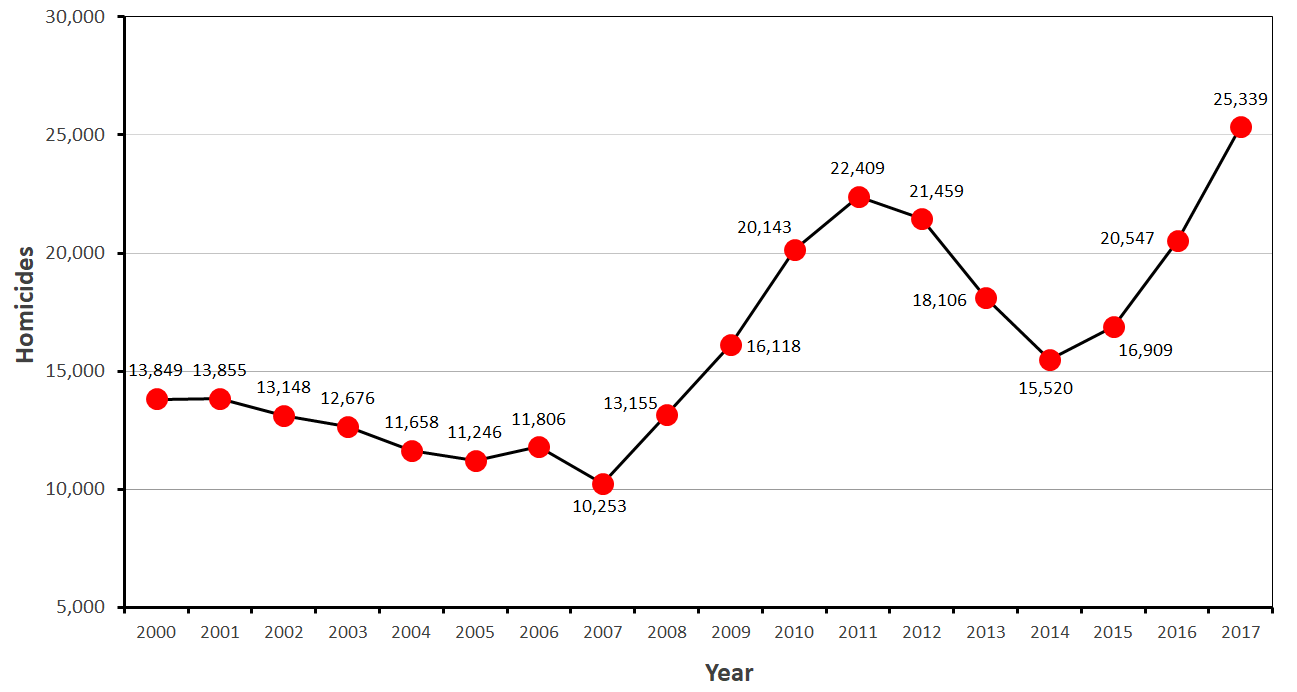 Source: Numbers of intentional homicide by year as reported by Mexico’s Executive Secretariat of the National Public Security System (SESNSP).

In this context, violence in Mexico has not been reduced but might have intensified in the past few years. For example, homicide rates have increased with 2017 being the deadliest year in the last two decades (See Graph 1). The visible negligence in addressing the security problem in Mexico, the extremely high levels of corruption linked to Enrique Peña Nieto’s administration, as well as the re-apprehension and subsequent extradition of Joaquín ("El Chapo") Guzmán to the United States seem to have contributed to the deterioration of the country’s security. The violence extends throughout Mexico’s Pacific region and seems uncontrollable in the state of Guerrero. The states of Veracruz, Tamaulipas, Michoacán, Sinaloa, Jalisco, and Colima continue to be on high alert due to the elevated levels of violence and death tolls. Moreover, the lack of control extends to major tourist zones located in Quintana Roo and Baja California Sur. Violence has also returned to the border states of western Mexico and the business of selling and producing heroin has expanded considerably.

How do we address this problem? It is necessary to implement immediate actions to reverse the negative tendencies that seriously affect the lives of Mexicans. Efforts should focus first on strengthening the police at all levels and combating corruption.  Serious efforts to reform the police were abandoned once the Internal Security Law was approved, which institutionalizes the participation of the armed forces in public security tasks. The latter is dangerous because the law extends the mandate of security forces beyond their areas of competence, which could potentially contribute to greater human rights violations without generating incentives for civilian forces to improve their capacity to combat crime. Current insecurity in Mexico cannot be solved by keeping the armed forces on the streets indefinitely and without a sustainable alternative plan in the long term. The only way to combat the violence that currently afflicts Mexicans is through effective police reform and an aggressive fight against corruption.

At the same time, strengthening of justice institutions in all their dimensions and levels of government is required—with special attention to the improvement of the penitentiary system. In this necessary transition, it is imperative to strengthen the system for human rights protection and to encourage citizen participation. International support for the fight against corruption could play an important role—as has occurred in other countries of the hemisphere. The appropriate legal framework exists and progress has been made in the formulation of reasonable reform proposals to develop an adequate institutional framework to deal with insecurity in the country.  But adoption of a law and reforms is inadequate if they are not enforced.  Strengthening the institutional framework must occur in practice in order to achieve true justice in Mexico.

Finally, it is essential to rethink the hemispheric anti-narcotics strategy. The results to date tell us about a failed strategy because, despite the loss of thousands of lives and the considerable resources invested in the war on drugs, the consumption of illicit substances has not been reduced.  Quite the opposite.  It is necessary to recognize the difference between drug trafficking and organized crime in its various forms. The first problem could be solved with a focus on consumption and not on the supply of drugs. The security strategy in Mexico should focus on the second problem. Corruption, the illegal extraction of income by organized crime and the weak Rule of Law—not drugs— are the real problems of Mexico.