More Than A Concrete Jungle: Urbanization in Japan 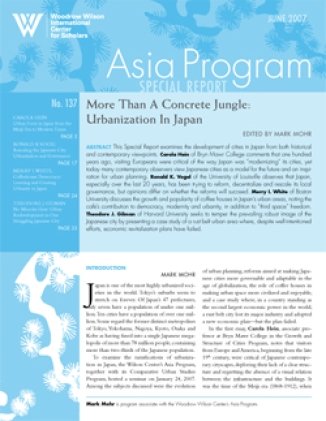 This Special Report examines the development of cities in Japan from both historical and contemporary viewpoints. Carola Hein of Bryn Mawr College comments that one hundred years ago, visiting Europeans were critical of the way Japan was “modernizing” its cities, yet today many contemporary observers view Japanese cities as a model for the future and an inspiration for urban planning. Ronald K. Vogel of the University of Louisville observes that Japan, especially over the last 20 years, has been trying to reform, decentralize and rescale its local governance, but opinions differ on whether the reforms will succeed. Merry I. White of Boston University discusses the growth and popularity of coffee houses in Japan’s urban areas, noting the café’s contribution to democracy, modernity and urbanity, in addition to “third space” freedom. Theodore J. Gilman of Harvard University seeks to temper the prevailing robust image of the Japanese city by presenting a case study of a rust belt urban area where, despite well-intentioned efforts, economic revitalization plans have failed.