Skip to main content
Support
Explore More
Close
Publication
U.S. Foreign Policy
Economic Sanctions are not an Effective Instrument for Political Pressure
Share on FacebookShare on TwitterShare via Email
Share
Part of the More Than Victims: The Role of Women in Conflict Prevention
Publication

More Than Victims: The Role of Women in Conflict Prevention (PDF) 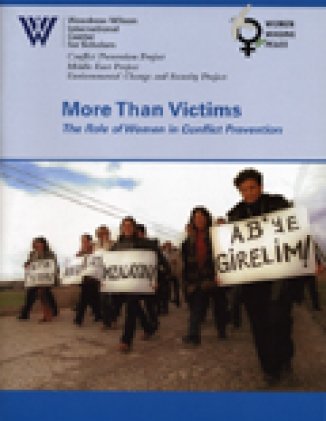 On September 12, 2002, the Woodrow Wilson International Center for Scholars and Women Waging Peace co-sponsored a conference entitled "More than Victims: The Role of Women in Conflict Prevention." The aim of the meeting was to move beyond the stereotypical images of women as victims in conflict and to explore their complex experiences as fighters, peacebuilders, survivors and protectors. This report provides a summary of the panel presentations and rich discussions that followed. While highlighting many of the challenges that remain, it provides concrete examples of how the international community in general can support women’s efforts and peacebuilding processes.

Women During Wartime: Organizing for Peace

Peacemakers, Peacekeepers and Peacebuilders: The Importance of Women in Conflict Prevention

Appendix IV: Summary of subsequent meeting,“Bringing Women to the Table: Identifying Strategies for Enhancing the Role of Women in Peace Processes Around the World”