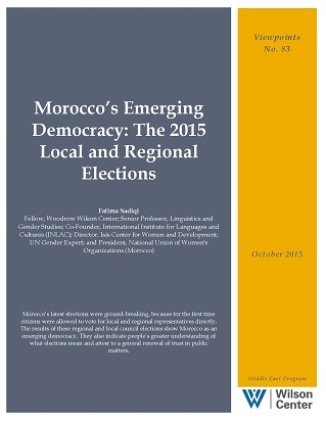 The latest elections in Morocco were ground-breaking because for the first time citizens were allowed to vote for local and regional representatives directly. On September 4, 2015, Moroccans elected 30,000 local council seats and 700 regional council seats out of 140,000 candidates from more than 30 parties. Voter turnout for the elections was 53.67 percent, up from approximately 45 percent in the 2011 elections.

These elections, an unprecedented move for the country, were part of a regionalization strategy that Morocco adopted in 2008 to give regions and municipalities more leeway in matters of political decision-making and management of funds.[i]

Three main parties topped the list of winners in the September elections.[ii]  With respect to the regional council seats, the Islamist Justice and Development Party (PJD), which has led the government since 2011, won 174 seats—more seats than any other party. The PJD fared well because of its focus on social justice and fighting corruption. The Authenticity and Modernity Party (PAM), which the monarchy established in 2008, came in second with 132 seats. The Istiqlal Party (PI), the oldest party in the country founded in 1944, took 119 seats and placed third. As for the local council elections, the PAM won 6,655 seats (21 percent), the PI won 5,106 seats (16 percent), and the PJD won 5,021 seats (15 percent).

The results of these regional and local council elections show Morocco as an emerging democracy.[iii] They also indicate people’s greater understanding of what elections mean and attest to a general renewal of trust in public matters.

More detailed analysis below includes comments on societal trends, general observations, and reflections on the election results and implications for the future of Morocco.

Attitudes about these results vary among Moroccans, but two main societal trends may be singled out. The first trend reveals that the majority of the population—constituted by apolitical, often poor, and semi-literate (or illiterate) people—views these elections as a way to end corruption and expect to see immediate change. The second trend reveals that the elite—constituted by political and intellectual elites, often urban—is generally optimistic and views these elections as a good step forward on the road to democracy and long-term change. In a largely illiterate and developing country, these two trends are to be expected given that the urban elite, more so than the majority, is aware of progress being made.

First, the turnout and interest in the elections demonstrate how Moroccan citizens have regained confidence in democratic institutions after long suspicion of their utility. Despite some irregularities noted by independent observers, there was no voter interference and the voting process was conducted close to international standards. The success of these elections means that Moroccans have realized the 2011 constitution guarantees fair participation of men and women in the election process.

The overall mood in the country reflects the idea that while the Islamist-led government passed the test of popularity, the real winner is democracy. Although most Moroccans may not realize that elections do not produce miraculous changes, it also seems that the Moroccan people viewed the electoral process as credible. Furthermore, if we compare Morocco to Algeria or Egypt, Morocco’s democratic transition appears to be less problematic than those of the other two countries. When Algeria attempted to implement democracy in the early 1990s, it lost some 250,000 lives. Despite elections in Egypt, the country’s military regime has resorted to violence to maintain its authority. Although the Moroccan elections were not without setbacks, neither the government nor the people resorted to violence.

Second, the September elections strengthened and consolidated Morocco’s regionalization project. The country’s 12 regions are now led by an elected council with wide economic, human, infrastructural, environmental, and cultural development capacities. This project is a major step forward for Morocco and a landmark for post-“Arab Spring” reform in the Middle East and North Africa region. Regionalization is a major priority for Morocco, which since 2011 has promised “reform under stability.” Therefore, failure to carry out this project would seriously harm the state’s credibility.

Third, the results of these elections show the decline of traditional political parties—such as le Union Socialiste des Forces Populaires (USFP), le Mouvement populaire (MP), le Rassemblement National des Independants (RNI), and the Istiqlal Party (PI)—and the rise of new political parties, including the PJD and PAM. The elections resulted in a painful defeat for the leftist parties, revealing that voters prefer new political actors that want to take responsibility for the management of municipalities and regions.

Fourth, the urban-rural divide in Morocco emerged as an important factor in these elections. Although the PJD dominated in large cities such as Rabat, Casablanca, Tangier, Fez, Marrakech, and Agadir for seats at the regional level, the party fell short in the local council elections that are weighted toward rural areas. The urban voters gave the PJD a vote of confidence as support of their anti-corruption and anti-status quo stances. Morocco’s urban voters also seem to be satisfied with the previous four years of governance by the PJD-led coalition, which undertook major structural and fiscal reforms that addressed the cumbersome subsidy system, froze public sector jobs, and led to a reduction in Morocco's budget deficit. The PJD’s rivals performed better in rural areas because the PJD is more attentive to urban, middle-class demands.

In addition to these trends and observations, two reflections can be noted while looking beyond the immediate aftermath of the elections. First, as efficient as it is, the electoral system in Morocco still needs structural reform. It is difficult to generate a clear winner in elections with 30 political parties. This is a complex issue given the central position and power of the monarchy, which is very popular and largely seen as a genuine factor of stability in a volatile region. The solution some experts have suggested is to have the monarchy yield more power to political parties.

Second, Morocco’s electoral system also requires changes in terms of outreach and citizen education. For Moroccans to truly understand the importance of elections, they must realize that the electoral process exists for citizens to choose representatives and then to hold them accountable. This necessitates special attention to empowering women and people living in rural areas, two significant and often marginalized groups in Moroccan society. These outreach efforts are particularly important because the PJD-led government seems to sideline the demands of these two groups.

Despite the remaining challenges within Morocco’s political process, the 2015 local and regional elections undoubtedly represent progress for the country as an emerging democracy. These elections have initiated a national debate and continue to stir attention throughout the country.

[i] The new government policy of regionalization strengthened local and regional councils by allowing them to manage municipal affairs in conjunction with state-appointed officials.