Skip to main content
Support
Show
Streaming
Brazil Elections 2022: A Discussion on the State and Stakes of the Race
Watch Now
Play Video
Show
Streaming
Russian War Crimes in Ukraine: Can Russia Be Held Accountable?
Watch Now
Play Video
Explore More
Close
Event
Governance
Pakistan's Institutions: We Know They Matter, But How Can They Work Better?
On Tuesday, January 10, 2017 at 9:45 – 4:30 ET
Share on FacebookShare on TwitterShare via Email
Share
Part of the Asia Program Publications
Publication

Pakistan's Institutions: We Know They Matter, But How Can They Work Better? 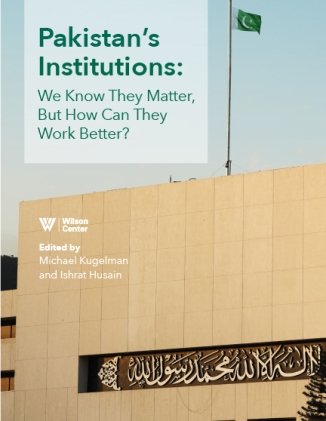 Back in 2012, a Pakistani professor named Farakh A. Khan issued a dire warning about the state of his country’s public institutions.

“Pakistan suffers from institutional failure,” he declared in an essay published about a year before his death. “Failed institutions are unable to correct the problems faced by the society and eventually lead to economic failure…If our leaders are sincere for change in Pakistan then they have to first get the institutions working again. But do they know how or have the will to do it?”

Today, the state of Pakistan’s institutions of governance remains poor, as illustrated by a slew of measures. The World Bank’s latest Worldwide Governance Indicators, based on data from 2016, rank Pakistan in the 29th percentile for government effectiveness, the 27th percentile for regulatory quality, the 20th percentile for rule of law, and the 19th percentile for control of corruption. Pakistan fell from 144th place in 2016 to 148th place in 2018 in the World Bank’s ease of doing business rankings. The latest United Nations Development Program Human Development report, published in 2017, ranks Pakistan 147th. The country improved its position on the World Economic Forum’s Global Competitiveness Index in 2017, though it was

The consequences of these struggles are stark and sobering: Ineffective institutions complicate efforts to develop and implement effective public policies. This means that Pakistan’s broader development challenges—which range from food, water, and energy insecurity to widespread public health epidemics and millions of out-of-school children—will remain in place, if not worsen.

Given the significance and far-reaching consequences of institutional struggles in Pakistan, the Wilson Center and the Fellowship Fund for Pakistan hosted an all-day conference on the topic in 2017. The event focused on the problems, but also on the encouraging reforms and success stories that highlight the possibilities for turning institutions around for the better. Edited versions of the papers presented at the conference appear in this volume.  You can download a digital copy of the report at this link.

Pakistan’s Institutions: We... by The Wilson Center on Scribd