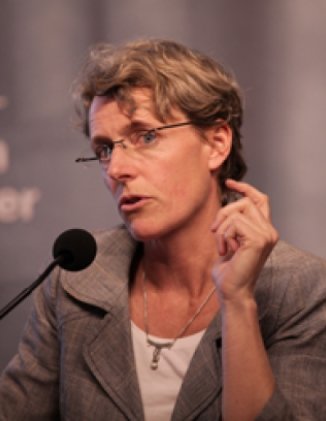 “The production of nuclear weapons changed Soviet and American societies by creating whole new kinds of communities and new definitions of citizenship and safety and risk,” said Kate Brown at a May 08, 2013 presentation of her new book Plutopia: Nuclear Families, Atomic Cities, and the Great Soviet and American Plutonium Disasters. Her research and the resulting book were born from two questions: why are the Hanford and Maiak plants (in Richland, USA and Ozersk, USSR, respectively) not household names like Chernobyl and Fukushima even though each plant issued “2 to 4 times more isotopes into the environment than Chernobyl?” And the corollary question, how did these plants, whose construction and operation involved hundreds of thousands of workers each, not create any significant whistleblowers until decades after their creation?

In answer to the first question, Brown observed that Chernobyl and Fukushima were disasters that “involved big meltdowns and occurred while the cameras were running.” That is, they were accidents that involved total failure of the plants and could not be hidden or covered up. The disasters at Hanford and Maiak, however, were catastrophes “in slow motion” and, more importantly, were not truly accidents. They were, Brown contended, “intentional – part of the normal working order.” Brown did not, however, paint a picture of simple recrimination for the plant managers. Rather, she illustrated the dangerous combination of misinformation, miscommunication, hopefulness, and, above all, pressure that contributed to many of the recurring mistakes made at each plant.

The two plutonium plants and, by extension, their constituent populations “orbited each other and were produced in each other’s image.” Each time the project in one country was in danger of having its budget cut, the other would make some significant breakthrough, which would in turn spur production at the other. The rivalry fueled the growing arms race and ensured their continued existence and funding. The constant atmosphere of fear and pressure led each of the plants to taking dangerous short cuts to meet the mushrooming production goals.

One such shortcut was the length of time used uranium fuel was allowed to cool before being processed. This fuel, pulled from the cooling ponds long before the recommended 90-day period, was called “green” and, when processed, would release vastly more radioactive iodine than fuel left to cool longer. War-time pressure in 1944 called for this cooling period to be minimized, but the post-war arms race meant that the Soviet Maiak plant ran green fuel for many years and that in 1949 the Hanford plant ran a dangerous experiment with green fuel (called the “Green Run”) to see how they could trace the hot radioactive isotopes as they scattered across eastern Washington State.

How did the operators keep these dangers secret from the public, and how did they keep their workers content and loyal when there was mounting evidence that these plants were dangerous to the health of all those that worked or lived near them? The traditional answer, according to Brown, is a tale of fortress-like cities and heavy security regimes. Her research showed, however, that that was only part of the story of Richland and Ozersk. Rather, as the plant managers learned early on in both projects, the best route to security was what Brown dubbed “plutopia”—a community of apparently classless affluence, in which becoming a resident “was akin to winning the golden ticket.” Brown interviewed a Richland resident who remembers that his father knew that “nowhere else could he provide for his family so well with his skills and education.” The plant cities created a standard of living many of their inhabitants could only have previously dreamed about.

Given the prospects available in cities neighboring Richland and Ozersk, the residents of plutopia knew very well how far they could fall. And if residents worried about the risks to their health, they were reassured by the medical staff that trumpeted their higher life expectancies, increased birth rates, and all-around better health than the national average. But, when the populations in question were predominantly young, relatively affluent families with dedicated health care and rich nutrition, it was little wonder their health was better than the average citizen outside of their community. Brown contended that this picture of health was a mirage. Both plants had medical staff to care for the permanent workers, and at least nominally, monitor them. But one glaring failure of the radiation monitoring system was that temporary workers, who came in by the tens of thousands to clean up messes or construct new facilities, were not monitored at all and were frequently dosed the most heavily before they left the site and “took with them the radioactive isotopes they had ingested.”

Much of the radiation released traveled on to communities beyond the production sites. In Ozersk, the slow moving Techa River carried water downriver to 28,000 residents who farmed, washed, and drank from the river that was from 1949-1951 the main dumping site for contaminated waste. The farming communities located outside of the plutopias, Brown stated, were the ones most affected by these disasters, and were typically home to ethnic minorities and working classes. Over time, individuals in these communities began suffering from a mysterious set of symptoms—fatigue, aches, anemia, rapid aging—that Soviet doctors eventually diagnosed as Chronic Radiation Syndrome. Once suggestions emerged that the maladies might be caused by nuclear contamination, US and Russian officials, quick to deflect scandal or attention to their vital plutonium facilities, “said people were sick instead from radiophobia, heavy drinking or inbreeding.” This dismissal stuck for a number of reasons: the relative health of Richland and Ozersk residents, the irregular and variable nature of the illnesses, and classist willingness to ascribe farmers’ maladies to their perceived inferiority.

Interestingly, Brown found that in each of these touted healthy “model communities,” their creators had trampled on their states’ ostensible ideological creeds. In Richland, the trappings of American democracy (self-governance and property ownership) were abandoned in favor of regimented control over self-expression and housing. In Ozersk, residents were held apart from the Communist project in different ways. They were excluded from local political participation, as they had no local communist party. Communist ideals of egalitarianism were also set aside for Ozersk as Stalin assured Igor Kurchatov, chief physicist in charge of the Soviet atomic bomb project, that Russia was poor but, “not so poor that a few can’t live well…with their own dachas and their own cars.”

Perhaps more interesting though, was that the residents, with some exceptions, were content with this situation. Patriotic as they were in work vital for national defense, they were happy to exchange their own rights for material security. Even after the Soviet Union collapsed, residents of Ozersk voted to keep their fences and their guards, preferring the security of their closed city to freedom of movement.

Plutopia is a historical comparison of two cold war atomic production facilities, yet Brown concluded that its insights remain relevant as the implications of militarized peace-time citizenry reverberate in Russian and American societies today: “in the plutonium cities, the exchange of political for consumer freedom led to unannounced nuclear disasters, the environmental, genetic, and social impact of which we have yet to fully absorb.”