Skip to main content
Support
Explore More
Close
Publication
Economics and Globalization
Polar Perspectives No. 1 | Is it time for a paradigm shift in how Antarctic tourism is controlled?
Share on FacebookShare on TwitterShare via Email
Share
Part of the Polar Perspectives
Publication 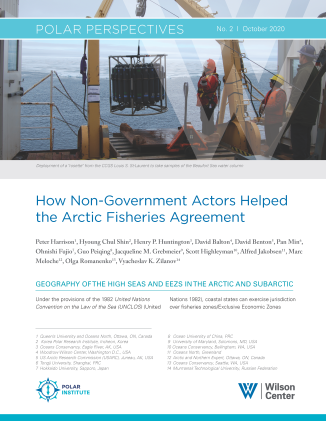 There are a number of high seas areas in the Arctic Ocean and, in the Bering Sea Donut Hole, failure to quickly conclude international treaty negotiations allowed the crash of the once valuable and infamous pollock stock. To avoid a similar situation in the CAO, the Arctic states built on previous diplomatic efforts and concluded negotiations on the CAO Fisheries Agreement in less than two years. Meanwhile, non-government actors and Indigenous people spearheaded multi-pronged engagement outside the scope of the diplomatic negotiations that attracted more, better-informed experts and parties.

In this second edition of Polar Perspectives, Peter Harrison et al. argues the CAO Fisheries Agreement (2018), became a landmark in both conservation and Arctic governance. All ten signatories – including China, the European Union, Japan, the Republic of Korea and six Arctic states – cite the CAO Fisheries Agreement as a powerful example of international cooperation and commitment to basic principles of conservation.