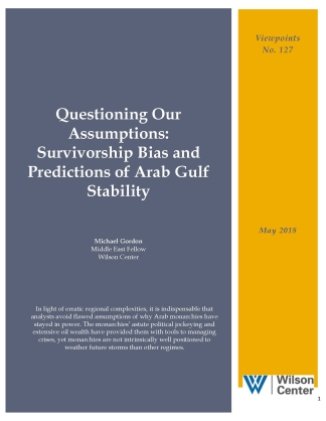 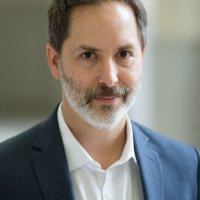 It is never a bad idea to question your assumptions. We are years removed from the maelstrom of instability in the Middle East and North Africa (MENA) that left some regimes in tatters, but the aftershocks are still being felt. One prediction (nay, assumption) to come out of the “Arab Spring” was that the Arab monarchies—the regimes that survived the destabilizing unrest intact—was their ability to manage coalitions of disparate constituencies, which provided these countries with a degree of stability absent in the collapsed regimes.

There is little reason to think that any of these monarchs are in any imminent danger of regime-threatening unrest. In fact, their hands have probably been strengthened in the years since the opening days of tumult in 2011. But, lest we fall victim to flawed assumptions of Arab monarchical staying power it is worth briefly re-examining the epistemology behind this analysis, especially in light of the complex and erratic environment in the MENA region: rising violence in the Palestinian territories over destitution in Gaza and the opening of the US Embassy in Jerusalem; the potential for military clashes between Iran and Israel; the US withdrawal from the Joint Comprehensive Plan of Action (i.e., the Iran nuclear deal); volatility in global oil prices and rising debt burdens; and the ever-present possibility that policy actions in countries—especially in Saudi Arabia—spark a backlash.

In 2011, when policymakers and MENA experts were trying to wrap their heads around why the regimes of so many Arab autocrats had imploded so rapidly, Gregory Gause admitted in an article in Foreign Affairs that he (and others) had been “spectacularly wrong” in earlier assessments that the Arab world’s authoritarian regimes “represented stable bets for the future.” This admission from an eminent political scientist and MENA expert is important. Self-reflection by pundits is generally the road less traveled, but it is the necessary path for contextualizing our forecasts and admitting the limitations in our predictive abilities.

Just two years after this admission, however, the same author predicted that the “Arab monarchies are here to stay,” and assessed that “the regimes are basically stable.” Such definitive statements would seem to contradict the candid appraisal of the limitations and blind spots of expert opinion made so recently. In fairness, the Arab monarchs do appear to have successfully weathered regional instability, but questioning our assumptions—in part by examining cognitive biases—can expand the aperture of how we analyze the stability of these countries.

First, recognizing survivorship bias in predicting the staying power of these monarchies is key. More or less by 2013 it appeared that those Arab regimes that would fall (or in the case of the Assad regime in Damascus, severely threatened) had already done so; more than two years had passed since the first rumblings of trouble for the region’s autocracies. The odds that widespread social unrest in any of the region’s monarchies could topple one of the regimes was a possibility, but generally considered remote. The monarchies survived; therefore something in their nature, it was argued, fostered their survivability. Had just one of the eight Arab monarchies fallen, the assessment of monarchical survivability would have become quaint.

Contemporary news reports certainly did not think the monarchs were inherently safe as large protests spread among their societies. Only after they had survived did the narrative of their innate survivability become a talking point. This survivorship bias happens all the time, and the business world provides ample evidence of this phenomenon. Gary Smith, a professor at Pomona College, critiqued the findings of the 2001 business book Good to Great, in which the author Jim Collins examined 11 companies out of 1,435 whose stock beat the market average over a 40-year time span and then searched for shared characteristics among them that he believed accounted for their success. Rather than a post hoc analysis, Smith says Collins should have started with a list of companies at the beginning of the test period to identify which specific traits would have pushed companies to perform better than the rest.

In his book Standard Deviations: Flawed Assumptions, Tortured Data, and Other Ways to Lie with Statistics, Smith writes, “It is not fair or meaningful to predict which companies will do well after looking at which companies did well! Those are not predictions, just history.” Smith noted that from 2001 through 2012 the shares of six of Collins's 11 “great” companies did worse than the overall stock market. Of course, for our purposes the shared traits among those surviving regimes was their royal lineage. Had the analysis of Arab monarchies before the Arab Spring promoted the theory that there was something organic in the nature of monarchies that girded their stability then we could test the theory after the fact.

Second, is the sample size too small or skewed? The Arab World consists of 22 countries (or territories) in the MENA region: Algeria, Bahrain, the Comoros Islands, Djibouti, Egypt, Iraq, Jordan, Kuwait, Lebanon, Libya, Morocco, Mauritania, Oman, Palestinian Territories, Qatar, Saudi Arabia, Somalia, Sudan, Syria, Tunisia, the United Arab Emirates, and Yemen. Eight of them are monarchies. Deriving a final judgment on the special nature of monarchies amidst limited case studies could prove fallacious. Recall that a number of these countries did not experience widespread social instability or removal of their governments spawned by Tunisia- or Egypt-inspired protests. Although in fairness, countries like Djibouti, Iraq, and Somalia during the time of the Arab Spring struggled with an inability to govern in the first place. Algeria and Lebanon—not governed by monarchies—did not experience regime-shaking unrest during those years.

Third, Dr Gause rightfully pointed out in his September 2013 assessment: “The oil monarchies of the Middle East were fortunate that the Arab uprisings occurred at the end of a ten-year period of relatively high oil prices. They thus had plenty of money in the bank and were willing to spend it quickly and effectively to blunt popular discontent and reassure existing client groups.” Jordan and Morocco are not oil producers, and Jordan is particularly bereft of domestically sourced energy. Yet the prodigious oil windfall allowed the Gulf monarchies to spend liberally on the regimes of fellow Arab royals, which allowed the poorer Amman and Rabat to continue to subsidize their citizens during the unrest and postpone economic reforms that could have sparked further turmoil. In 2013, the global oil market was in its third year of bullish prices, averaging about $113 per barrel.

So was it the specific policies of monarchical governments themselves that bolstered their staying power or the enormous revenues generated from high and sustained oil prices? Here is where the fallacy of causation comes in.

Lastly, geopolitics is progressively becoming more complex, especially in light of the past several years in the MENA region. As a result, confident forecasts about directionality become more difficult to make. The political systems of the monarchies themselves are not necessarily overly complex; democracies (and partial democracies) are inherently more complicated due to the multiple power centers and competing interests. Rather, the sheer scale of outside actors and shifting policies in the region and from outside beg a reconsideration of assumptions of regime resilience among the monarchies. Philip Tetlock and John Gardner have written that natural science has revealed that our ability to predict is limited by the nature of complex systems.

Recent history is littered with confident judgments of “new world orders,” “this time is different,” or “the great moderation.” Do Arab monarchies fall into this class as well? Experts explained the East Asian economic “miracle” by way of their local macroeconomic policies and cultures of saving, until unstable currency regimes and real-estate bubbles birthed sweeping economic damage across Indonesia, Malaysia, South Korea, and Thailand. Books like, Dow 40,000: Strategies for Profiting from the Greatest Bull Market in History were written in 1999, until the index lost more than 30 percent of its value in three years and as of 2018 was still more than 15,000 points shy of 40,000. In sum, seeing something special in a brand of economic policy, politics, finance, or regime-type can lull observers into underestimating the role of human nature and complex systems.

What could dent this resilience? The Arab monarchies in some respects are in a stronger position perhaps at any time since the Arab uprisings, due largely to a steady (though not inevitable) rise in oil prices, the rollback of the Islamic state—the fallout from which threatened the stability of northern Jordan—and the experience wrought from the implosion of other Arab regimes. These trends notwithstanding, other trends bring mixed prospects. Take for instance some of the “radical” policies now being promoted in Saudi Arabia by Crown Prince Muhammad bin Salman. Plans to liberalize the economy, rein in “cradle to grave” social spending, and open the social and cultural space to women and entertainment will not by themselves fuel widespread conservative reaction in the kingdom—in fact these changes might strengthen the viability of the political system in the long term—but the consequences of social change managed from the top cannot be easily anticipated, resulting in a more dynamic environment in which to make predictions.

Saudi Arabia is unique in its reformist social experiment among the Arab monarchies, especially given its ossified social and religious policies, and it is too early to tell what backlash, if any, is germinating. Social dynamism, however, is not the only issue at play in some monarchies: political issues are swirling to make predictions of long-term stability more challenging. More than half of Jordan’s population are Palestinians hailing from the West Bank and other areas of modern-day Israel. While they have been mostly quiescent and accepting of their status in Jordan, provocations in the Palestinian Territories and the perception that Israel is acting aggressively against Palestinian interests in the Territories have perennially served as an open nerve for political action in Jordan. Protests in the past have largely been directed outward to Israel, but it is not inconceivable for widespread protests to look inward at a King sometimes considered too forgiving of Israeli actions.

The preceding analysis is meant to serve as a call to humility in predictions and to question the assumptions used in making predictions, based on highlighting some pitfalls of our cognitive biases. It is not a forecast of the imminent demise of the Houses of Al Saud, Al Sabah, Al Said, et al. Predicting their inevitable collapse is no more valid than lauding the innate strength of monarchies. Those predictions as well should be examined closely for they often appeal to hyperbole or stumble over similar biases. “Most of these [Arab Gulf] regimes—at least in their present form—will be gone within the next two to five years,” wrote a scholar of the Gulf in 2013. The clock is ticking.

Astute political jockeying pursued by the monarchies and extensive oil wealth among the Gulf states have provided them extra tools for managing crises. In the end, however, monarchies are probably not intrinsically better positioned to weather future storms than other regimes. They have not, as it were, figured it out. Just ask Louis XVI, Nicholas II, or the last shah of Iran.