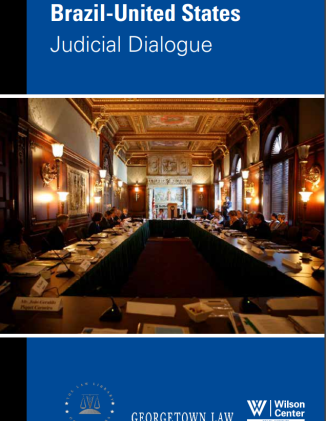 By Paulo Sotero
Rule of Law

Affirming the Rule of Law in a historically unequal and unjust society has been a central challenge in Brazil since the reinstatement of democracy in the mid-1980s. The evolving structure, role and effectiveness of the country’s judicial system have been major factors in that effort. Most experts would agree that progress has been and continues to be made.

Evidence of advancements can be found, for example, in the establishment of small claims courts and the creation a supervisory National Council of Justice. In addition, the successful implementation of an electronic voting system under the supervision of a specialized federal court as well as the historic trial of the largest political corruption scandal in Brazil’s history by the nation’s Supreme Federal Tribunal are further evidence that the rule of law is taking root. An important ingredient of the continuous process of judicial reform in Brazil has been the openness of judges, prosecutors and legal scholars to exchange experiences with colleagues from abroad. Particularly relevant in that context have been interactions between Brazil and American judges and members of academia.

In the spring of 2011 the Brazil Institute of the Wilson Center and the Law Library of the United States Library of Congress organized a high level conference consisting of experts from America’s two largest democracies in a comparative examination of their respective judicial systems. The Georgetown University Law Center participated as an institutional co-sponsor. Four members of the Brazilian Supreme Federal Tribunal came to Washington to exchange Brazil-United States Judicial Dialogue l iii l experiences and views with American judges and legal scholars through a Brazil-United States Judicial Dialogue. The delegation was led by the Court’s President at the time, Minister Cesar Peluzo. He was joined by Minister Ellen Gracie Northfleet, the first woman to sit on Brazil’s highest court and a Former President of the Court, Minister Gilmar Mendes, also a former President of the Court, and Minister Ricardo Lewandoswki, who will be elevated to the presidency of the Federal Supreme Tribunal in April 2014 for a period of two years.