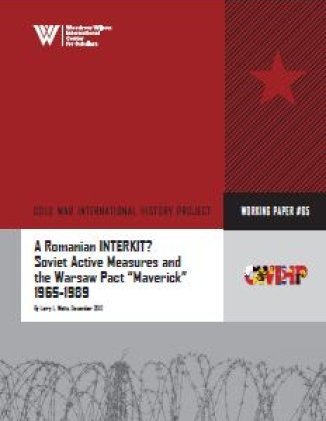 In CWIHP Working Paper #65, "A Romanian INTERKIT?: Soviet Active Measures and the Warsaw Pact 'Maverick,' 1965-1989," Larry L. Watts argues that Soviet propaganda campaigns against Romania presaged similar operations against China, and had a direct influence on the development of later anti-Chinese structures and tactics.

In December 1967, Soviet authorities launched a coordinated “active measures” campaign known as the “China International” or INTERKIT, a joint ideological, propagandistic, and disinformation assault against the Chinese that ran from the late 1960s until 1986. During the same period in which the INTERKIT skeleton was being fleshed out, Moscow was developing a similar structure for addressing the Romanian heresy, while also targeting Romania within INTERKIT itself.

The timing of INTERKIT suggests that the development of the “China International” to counter the subversive activities of Beijing and the development of concurrent anti-Romanian operations involving several republics within the USSR were at least parallel preoccupations for Moscow. These Soviet documents suggest that prior experience in structuring anti-Romanian operations during 1964-1968 may even have influenced the structural evolution of INTERKIT during 1965-1969.

Larry L. Watts is a professor in the Master’s Program in Security Studies and Intelligence Analysis run jointly by the University of Bucharest and the Romanian Intelligence Service (SRI). He served as security sector reform advisor to Romania’s Presidential Counselor for National Security and to the Romanian Defense Ministry during 1991-2004. He is the author of With Friends Like These: The Soviet Bloc’s Clandestine War Against Romania (2010), which was published in Romanian translation in 2011. Most recently, he has an upcoming book Extorting Peace: Romanian-Warsaw Pact Relations During 1978-1989 and the End of the Cold War, which will be published in Romanian in 2013, and followed by publication in English.