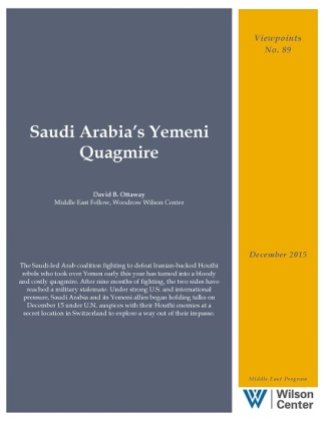 Riyadh—The devastating war in Yemen is turning into a costly quagmire for Saudi Arabia, which has been leading a coalition of nine Arab states on a risky military venture since March to crush Iranian-backed Houthi rebels who seized control of Yemen early this year.

The Saudi objective to achieve a clear military victory now seems increasingly unrealistic. In addition, the Saudis are coming under intense pressure from the Obama administration, which has been providing the Arab coalition with intelligence and war materiel, to end the conflict through "peaceful political means." Pursuit of this elusive goal gets underway today, December 15, in Switzerland when the two warring sides will meet to talk about a way out of the impasse. Both have agreed to a seven-day ceasefire, but past attempts to achieve a similarly limited truce quickly failed.

A lot is at stake for the ruling Saudi royal family. The Saudis are determined to demonstrate to Iran, their chief regional rival, that they have the military might to defeat its Houthi allies and block its efforts to establish a foothold on the kingdom's vulnerable southern border. The war has also sharpened the two countries' sectarian rivalry since the Houthis belong to an offshoot of Shi’ism, the dominant religion of Iran. Saudi Arabia, on the other hand, is the birthplace of Islam and regards itself as the religious leader of the Arab world's majority Sunni population.

Inside the House of Saud, the failure to achieve a military victory in Yemen could well damage the political career of the ambitious 30-year-old defense minister, Mohammed bin Salman, the son of King Salman. He is also deputy crown prince and leader of the family's "hawks," who are out to prove the kingdom's military prowess as they pursue Arab world leadership.

However, the war has reached a military stalemate and Yemen is on the brink of famine after the deaths of 5,900 combatants and civilians. The cost of sustaining the air, ground, and sea operation is said to have reached $200 million a day, though it is unclear how much of this the Saudis are footing on their own. The Obama administration has just approved the Saudi purchase of $1.3 billion in munitions despite accusations by some Democrats in Congress and international human rights groups that the Saudi-led coalition bombings have inflicted massive collateral damage on civilian targets like factories, hospitals, schools, homes, and even wedding parties. Most of the war materiel is for more bombs, including 12,000 unguided “dumb” and 8,000 laser-guided “smart” ones, plus 1,500 bunker-busters.

Forces loyal to the internationally recognized government led by President Abd Rabbuh Mansur Hadi and supported by the Saudi-led coalition have taken back the southern port city of Aden and four neighboring provinces. But the Houthis and allied army units still loyal to former president Ali Abdullah Saleh, ousted as a result of an uprising in 2011, still hold the north of the country, including the capital, Sana’a.

The Saudi-led offensive pushing north from Aden has become bogged down over its attempt to break the Houthi siege of Taiz, 150 miles south of Sana’a. But even its ability to secure Aden with the help of troops from the United Arab Emirates and Sudan has come into question after the assassination by a massive roadside car bomb on December 6 of its governor, General Jaafar Mohammed Saad. The Islamic State took credit, but Saudi and diplomatic sources here suspect the real culprit to be agents loyal to former president Saleh, a canny manipulator of friends and foes alike during his 34 years in power.

In response to the deteriorating security situation in Aden, Saudi Arabia is rushing special counterterrorism troops there to protect the Hadi government, which presently has its headquarters there. It is not just Aden where its authority is being challenged, however. Al-Qaeda in the Arabian Peninsula (AQAP) has taken over the southeastern province of Hadhramaut and is expanding into Lahij province north of Aden. The even more extremist Islamic State is also steadily expanding its influence.

So far, the Saudi coalition has avoided taking on AQAP or the Islamic State because it has been focusing on rolling back the forces of the Houthis and Saleh. But the Saudis are well aware of al-Qaeda’s longtime objective because the House of Saud has dealt with its terrorist attacks inside the kingdom for four years before driving them into Yemen.

Saudi travails in pursuing a military victory are now partly due to disagreements with the UAE, its main coalition partner, over reliance on a militia from a Yemeni faction, al-Islah, which is associated with the Muslim Brotherhood. The Emirati government has imprisoned scores of its members for allegedly seeking its overthrow. In Yemen, Emirati soldiers found themselves obliged to work with al-Islah militiamen both in Mareb and Taiz provinces because they are the chief Saudi allies there. The Emirati state minister for foreign affairs, Anwar Gargash, on November 22 put out a tweet claiming Taiz would already have been "liberated" from the Houthi siege "had it not been for the failure of al-Islah and the Muslim Brotherhood to act."

As a result, the UAE has cut in half the number of its troops engaged in the ground war to 2,000, most of whom have withdrawn from the front line and are now concentrated in and around Aden. In their place, the Emirates has been sending in hundreds of mercenaries from Colombia, six of whom were reported on December 9 to have been killed together with their Australian commander fighting the Houthis in Taiz province. Other Arab reinforcements are on their way. Morocco has just announced it is sending 1,500 troops, and Sudan, which already has a force of 850, has pledged to send thousands more.

The coalition spokesman, Brigadier General Ahmed Asiri, denied there was a military stalemate and pointed to the successes so far of Yemeni forces loyal to the Hadi government in liberating "70 percent" of the country. But he played down the importance of retaking the capital, calling it "a small point" compared to the Saudi overall of objective of assuring "a secure and stable Yemen."

The Saudi-backed Hadi government, meanwhile, has become virtually split in two, with Vice President Khaled Bahah rejecting a recent Hadi cabinet reshuffle and building his own constituency, apparently with the intention of eventually challenging the president's leadership. Hadi is believed to be less willing to strike a compromise with the Houthis than Bahah.

The negotiations starting today, December 15, at a secret location in Switzerland under UN auspices are aimed at implementing UN Security Council Resolution 2216. This resolution calls for the forces of the Houthis and Saleh to withdraw from all the cities and territory they have conquered, hand back their heavy weapons taken from the army, and resume a national dialogue over a plan for a new federal state that the Houthis rejected last year. The Houthis have said they accept the UN resolution as the basis of talks but raised questions about how it would be implemented. They have also proposed that Vice President Bahah, but not President Hadi, return to Sana’a to organize new elections within six months.

Among the many thorny issues standing in the way of a settlement is the nature of a transitional government, what authority would take control of surrendered heavy weapons, and, above all, the fate of Saleh. The Saudis and their allies want him removed from the political scene and sent into exile permanently.

U.S. diplomats working on finding a way out of the impasse have suggested either Ethiopia or Morocco as his new home. But Saleh has long resisted exile and reportedly wants new amnesty from prosecution, similar to the one given to him in return for his giving up power in 2012. Given the deep distrust between the two sides and their respective accumulated grievances against each other after nine months of war, the prospects for a settlement through "peaceful political means" do not seem bright. But it is also true that the two sides have reached a military stalemate that may make them more amenable now to striking a compromise.