Saudi Women Go to the Polls—Finally 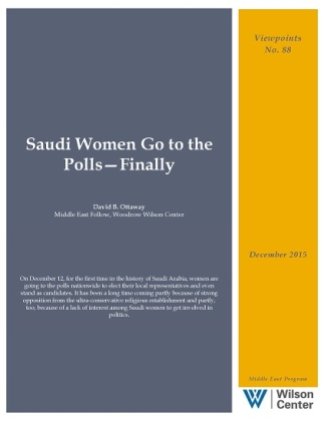 Riyadh—On December 12, for the first time in the history of Saudi Arabia, women are going to the polls nationwide to elect their local representatives and even stand as candidates. It has been a long time coming partly because of strong opposition from the ultra-conservative religious establishment and partly, too, because of a lack of interest among Saudi women to get involved in politics.

That this is happening at all goes back to one of the few political reforms decreed by the late King Abdullah in response to the 2011 Arab Spring uprisings, in which he announced that women would be included in the 2015 municipal elections. He later also appointed 30 women to the national Shura Council, making him somewhat of a national hero among the growing number of female activists here. Saudi Arabia is the last of the six Gulf Arab monarchies to extend voting rights to women, though the others allow it at the national level as well. The only Saudi women allowed to vote before were the few belonging to business chambers of commerce.

The new King Salman, who took over in late January upon Abdullah's death, is regarded as a staunch supporter of the religious establishment but has nonetheless allowed the elections to go ahead with women participating. This could well be because his influential son, Mohamed bin Salman—who is deputy crown prince and defense minister—is only 30 years old and sees himself as the kingdom’s leading reformer.

Nonetheless, it has been an uphill struggle for activists to overcome the apathy and cynicism among Saudi women toward voting for representatives to municipal councils, an attitude shared by Saudi men as well. Only 130,637 women registered to vote in the December 12 elections, but only 1,355,840 men bothered to sign up either out of a population of 20 million Saudi nationals, among whom six to seven million are estimated to be eligible voters—Saudi election officials were unable to provide an exact figure.

Still, there was no shortage of male and female candidates. Out of a total of 6,917 running for election in 284 municipalities, 979 are women.

The government has taken a number of steps to try to gin up more interest in the event after a sharp falloff in participation between the first municipal elections in 2005 and the second in 2011. It has increased the percentage of elected members on the municipal councils from one-half to two-thirds, expanded their size, reduced the voting age from 21 to 18, and given the bodies much more power to decide how central government-provided funds will be spent. These enticements have attracted an additional 549,000 Saudis to register to vote this time, mostly men. Only 2,000 additional Saudi men had registered for the last municipal elections in 2011.

The focus is falling this time, however, on first-time female voters and candidates. One reason there is even a small number of women voters is the work of Al-Nahda, a Riyadh-based private philanthropic society that has been running a female voters' education campaign since April. Sheikha al-Sudairy, its chief project officer, said it had not been easy to explain "what a representative is" and what a municipal council does to apathetic Saudi women who have never had any role in politics before. Her organization trained 125 women who in turn undertook a nationwide voter education campaign for women. She ascribed the low turnout to the fact that the idea of electing people to run even local governing bodies was still "an alien concept," in addition to the general public cynicism about the powers of municipal councils to decide anything in a highly centralized monarchy.

Then there were the problems women faced when trying to register to vote, not to mention a set of highly restrictive rules on campaigning. Samar Fatany, a Jeddah feminist who writes extensively about the problems facing Saudi women, said one of the main obstacles to registration was providing proof of residency in one's voting district. Officials asked for electricity or water bills, but they were seldom in the woman's name. "It was kind of a put off," she remarked.

Restrictions on campaigning aimed at strict segregation of women and men were just as intimidating. Wardah al-Safwani, an ophthalmologist and widow, is one of 11 women running for 12 out of 18 elected seats on the council of Qatif in the Eastern Province. Like all female candidates, she is forbidden to put her picture on her Facebook page ("Warda51") and said she would be fined $2,000 if she was caught talking directly to a man. Nor can she give an interview to the media, which is not true for male candidates. She said she is relying heavily on social media to spread her campaign goals, which include trying to get more women involved in local politics.

For the current elections, there are just 500 women out of 50,000 registered voters in Qatif, the stronghold of the kingdom's minority Shi’ite population. Faced with these odds, her chances for election appear slim, but she is nonetheless exhilarated by the experience. "We start being responsible for what is happening in our community," she remarked. "You find out many things about how our local government works."

A similar enthusiasm radiates from Amal Badredin Alsnari, a doctor who runs a clinic in Riyadh where she is standing for election. She is a graduate of the Al-Nahda training program but already a longtime feminist who was one of 50 Saudi women who defied the ban on women driving on November 6, 1990 by doing precisely that in the streets of Riyadh. Most of them lost their jobs and passports as a result, though Alsnari stood up to the religious police who tried to arrest her. Alsnari has also been defying the ultra-conservative clerics' determined efforts to keep Saudi women covered with face veils. "I never cover my face," she said defiantly.

Alsnari said she has been working to mobilize women for two years, arguing that since the system is allowing women to participate in politics now, "why not. We women see many ways to make life better." She ticked off a list of issues from cleaning up streets to the need for local youth social centers and workshops on health education and the environment.

In addition to handing out bracelets with the words "Your Voice Counts" written on them and running a social media campaign, she will hold a public meeting at the Holiday Inn in downtown Riyadh on Thursday, December 10, the last day allowed for campaigning before elections on Saturday, December 12. But men and women would have to be in separate rooms, and she could not address the men face to face. She did, however, have a male supporter ready to represent her and answer questions as allowed under the campaign rules.

Given the low number of registered female voters, the chance of any of the 979 female candidates being elected will clearly depend on their success in convincing men to vote for them. Predictions for the outcome among a range of Saudi analysts, voters, and candidates, both male and female, ranged from none to possibly two or three.

Judea al-Qahtani, head of the government's electoral committee, thought that even the modest number of female registered voters was a victory. "This is the first time for them to vote and we are proud of them."